Sacred Honor: Our Oath to Support and Defend

“Of all the dispositions and habits which lead to political prosperity, Religion and morality are indispensible supports. In vain would that man claim the tribute of Patriotism who should labor to subvert these great Pillars of human happiness — these firmest props of the duties of men and citizens. … Let it simply be asked where is the security for property, for reputation, for life, if the sense of religious obligation desert the oaths…” —President George Washington (1796) 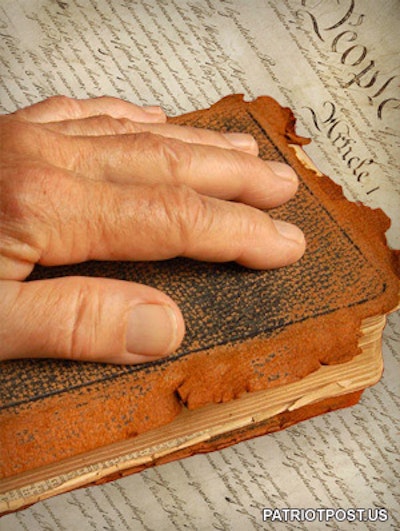 In 1776, an extraordinary group of men signed a document that affirmed their unalienable right to “life, liberty, and the pursuit of happiness” as “endowed by their Creator.” By attaching their signatures to our great Declaration of Independence, they, in effect, were signing their death warrants in defense of American Liberty.

Indeed, the last line of our Declaration reads, “For the support of this declaration, with a firm reliance on the protection of Divine Providence, we mutually pledge to each other our lives, our fortunes and our sacred honor.”

These men, and their countrymen and women, were the first generation of American Patriots, and they had chosen “the animating contest for freedom,” as Samuel Adams put it, rather than “the tranquility of servitude.” Indeed, they were willing to die for the cause of Liberty.

A decade later, Liberty having been won at great cost, our Founders further codified their independence and interdependence by instituting yet another historic document, the United States Constitution.

Our Constitution, as written and ratified, stipulates in its preamble that it is ordained and established by the people to “secure the Blessings of Liberty to ourselves and our Posterity.” To that end, it established a Republic, not a popular democracy, which is to say that it affirmed the primacy of Rule of Law over rule of men.

Accordingly, the first order of business for those we elect to national office is that they be bound by oath to “preserve, protect and defend” the Constitution under which they were duly elected.

For those elected to the presidency, Article II, Section 1, specifies: “Before he enter on the Execution of his Office, he shall take the following Oath or Affirmation: ‘I do solemnly swear (or affirm) that I will faithfully execute the Office of President of the United States, and will to the best of my Ability, preserve, protect and defend the Constitution of the United States.’”

On April 30th, 1789, our nation’s first Commander in Chief, George Washington, took the presidential oath of office with his hand on a Bible opened to the book of Deuteronomy, Chapter 28. He ended his oath with “So help me God,” which was soon thereafter added to military oaths for officers by Act of Congress.

Later that day, in his First Inaugural Address, President Washington said: “It would be peculiarly improper to omit, in this first official act, my fervent supplications to that Almighty Being who rules over the universe, who presides in the councils of nations, and whose providential aids can supply every human defect.” Such was the conduct of his administration.

In his Farewell Address of September 19th, 1796, Washington concluded with these words: “Of all the dispositions and habits which lead to political prosperity, Religion and morality are indispensable supports. In vain would that man claim the tribute of Patriotism, who should labor to subvert these great Pillars of human happiness, these firmest props of the duties of man and citizens. … Let it be simply asked, where is the security for property, for reputation, for life, if the sense of religious obligation desert the oaths, which are the instruments of investigation in Courts of Justice? And let us with caution indulge the supposition, that morality can be maintained without religion. Whatever may be conceded to the influence of refined education on minds of peculiar structure, reason and experience both forbid us to expect, that national morality can prevail in exclusion of religious principle.”

Regarding the Presidential Oath of Office, Justice Joseph Story wrote: “The duty imposed upon him to take care, that the laws be faithfully executed, follows out the strong injunctions of his oath of office, that he will ‘preserve, protect, and defend the constitution.’ The great object of the executive department is to accomplish this purpose.” He wrote further that if the president does not honor his oath, his office “will be utterly worthless for … the protection of rights; for the happiness, or good order, or safety of the people.”

In addition to the Constitution’s oath mandate for presidents, Article VI, Clause 3, specifies: “The Senators and Representatives before mentioned, and the Members of the several State Legislatures, and all executive and judicial Officers, both of the United States and of the several States, shall be bound by Oath or Affirmation, to support this Constitution…”

Commissioned officers and enlisted military personnel are also required by statute (Section 3331, Title 5 and 10 U.S.C. § 502, respectively) to “solemnly swear, that I will support and defend the Constitution of the United States against all enemies, foreign and domestic; that I will bear true faith and allegiance to the same…” Commissioned officers (O-1 through O-10, and W-2 through W-5 [chief warrant officers]) receive commissions under the authority of the President with the advice and consent of the Senate. Warrant officers (WO-1) receive their warrant under the authority of their respective service secretary.

Notably, the officer’s oath doesn’t include any language about following orders, but the enlisted oath does: “I will obey the orders of the President of the United States and the orders of the officers appointed over me, according to regulations and the Uniform Code of Military Justice.” However, the UCMJ clearly establishes that enlisted personnel are bound to obey only “lawful orders.” The “I was only following orders” defense has been insufficient since first being tested in 1799.

Here we should note that all of these oaths mandate the preservation, protection, support and defense of our Constitution as ratified, not as modified or misinterpreted by activist judges under the auspices of a “living constitution.” Indeed, this is precisely what Jefferson had in mind when he foretold of “the despotic branch.”

Generations of American Patriots have honorably supported and defended our Constitution with their blood and their lives. But George Washington warned, “Guard against the impostures of pretended patriotism.”

At their core, the words “American Patriot” have their lineage with those who fought for American independence and established our constitutional republic. That lineage, in turn, has been passed down through our history by those who have been entrusted “to support and defend” our Constitution.

In 1775, John Adams wrote to his wife, Abigail, “A Constitution of Government once changed from Freedom, can never be restored. Liberty, once lost, is lost forever.”

In 1816, Thomas Jefferson wrote to Charles Yancey, “If a nation expects to be ignorant and free … it expects what never was and never will be.”

I have taken my oaths nine times in the service of my country. But I did not have to take an oath to understand my obligations as a citizen “to support and defend” our Constitution. Further, I also note that all duly administered oaths are binding indefinitely — there is no duration specified or defined. Thus, we are bound by our oaths until death do us part.

Read about the Oath Accountability Act.