The Antifa Movement — Coming to a Theater Near You

What is “antifa,” and who is backing and benefiting from its actions?

“Let the American youth never forget, that they possess a noble inheritance, bought by the toils, and sufferings, and blood of their ancestors; and capacity, if wisely improved, and faithfully guarded, of transmitting to their latest posterity all the substantial blessings of life, the peaceful enjoyment of liberty, property, religion, and independence.” —Joseph Story (1833)

Most Americans — those with jobs, families and community obligations and responsibilities — had likely not heard of “antifa” before throngs of its masked thugs initiated the riots in Charlottesville last month — though the “group” played dominant roles in riots at Berkeley University in February and Evergreen State College in June.

What, then, is antifa?

Correctly stated, it is a domestic derivative of “Antifaschistische Aktion,” the paramilitary wing of the 1930s communist movement in Germany.

Reemerging in the U.S. in the 1990s under Bill Clinton, it has metastasized over the last eight years under Barack Obama’s regime into an autonomous collective of radical “useful idiots.”

The movement was invigorated by Obama’s Marxist agenda and that of his socialist bourgeoisie cadres. It coalesced around Obama’s revolution-tested politics of disparity, as instilled in him by his Marxist mentors. Antifa is the current manifestation of his repugnant Red October uprising, “Occupy Wall Street,” in the fall of 2011.

Recall that Obama proclaimed to his Occupy cadres, “You are the reason I ran for office.”

Over the last eight years, the Occupy Wall Streeters and their kissin’ cousins, the so-called “Black Lives Matter” cabal, have had a hand in every urban-area riot across America. Like them, the antifa thugs typically organize protests using social media accounts, websites and email blasts.

In 2016, the antifa movement was further energized by the socialist platform of Bernie Sanders, until his presidential campaign was bushwhacked by the Democrat National Committee and Hillary Clinton.

Currently there are organizational links between antifa and Obama’s Organization for Action, which is “preparing” the next generation of “community organizers.” Of course, there are also links with billionaire communist George Soros and his plethora of Marxist subsidiaries.

Antifa is composed of mostly white adolescent agitators, violent malcontents between 18 and 30 years of age, from about 200 autonomous anarchist and anti-capitalist factions. Thus, it’s not an overtly formal organization — yet.

Who benefits from antifa propaganda and violence?

The lack of organization doesn’t mean that no one is benefiting from antifa’s propaganda and violence. Indeed, the antifa movement has created a fundraising windfall for leftists, particularly the Democrat Party race-baiters and the hate-hustling profiteers at the Southern Poverty Law Center.

These two money-grubbing organizations have generated an endless stream of revenue beginning with their faux indignation at Donald Trump’s condemnation of both hate factions involved in the Charlottesville riots. The Democrat leadership and their Leftmedia propaganda machine devoted all their bandwidth to castigating Trump for daring to call out the thugs from both alt-right and alt-left.

Despite the Demo-goguery, historian Victor Davis Hanson, a senior fellow at the Hoover Institution, observed: “In the olden days, demonstrators decked out in black, with masks and clubs, would have been deemed sinister by liberals. Now are they the necessary shock troops whose staged violence brings political dividends? Antifa’s dilemma is that its so-called good people wearing black masks can find almost no bad people in white masks to club, so they smash reporters, the disabled, and onlookers alike for sport — revealing that, at base, they perversely enjoy violence for violence’s sake. As the cowardly Klan taught us in the 1920s and 1960s: Put on a mask with a hundred like others, and even the most craven wimp believes he’s now a psychopathic thug.”

National Review’s Jim Geraghty notes, “Antifa chants, ‘No Trump, no wall, no USA at all.’ The label ‘anti-American’ is not a pejorative, it’s just descriptive.”

And NR’s Rich Lowry calls out the hypocrisy: “Too many people were willing to perfume antifa in the wake of Charlottesville. But Berkeley demonstrates once again the true nature of this left-wing movement, which is thuggish in its tactics and totalitarian in its sensibility. Anyone who at this point makes excuses for antifa — or worse, justifies it — is participating in its moral rot. … There was certainly moral equivalence between Hitler and Stalin. Likewise, bully-boy fascists spoiling for a fight and black-clad leftists looking to beat them up exist on the same moral plane. They both thrill to violence and benefit from the attention that comes from it. They both reject civility and the Rule of Law that make a democratic society possible. They both are profoundly illiberal. … Liberal commentators spread memes comparing antifa to American GIs who stormed the beaches at Normandy. The comparison would be apt if the 1st Infantry Division got together to spend an afternoon beating up fellow Americans rather than giving its last measure of devotion to breaching Hitler’s Atlantic Wall.”

Lowry was referring to, among others, this absurd social media post from The Atlantic’s editor in chief, Jeffrey Goldberg, who equated our nation’s valorous D-Day forces with antifa: “Watching ‘Saving Private Ryan,’ a movie about a group of very aggressive alt-left [antifa] protesters invading a beach without a permit.”

Shame on him. Far better men than Goldberg shed their blood on those Normandy beaches so that he could have the freedom to make such profoundly dullard remarks. 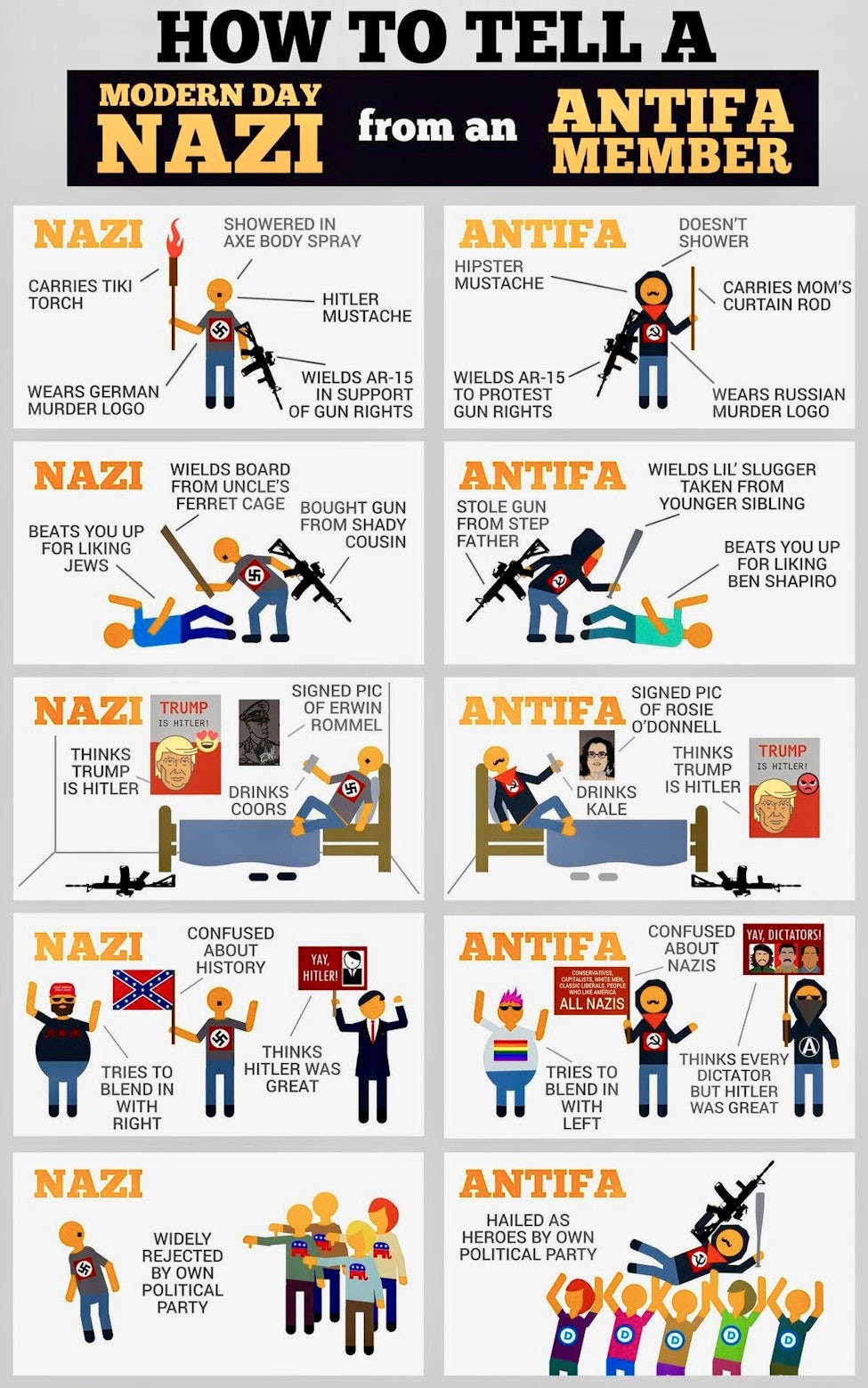 One of the nation’s most noted leftist legal protagonists, Harvard law professor Alan Dershowitz, warned that Democrat leaders are making a grave mistake by embracing those who want to “tear down America” and by not condemning both sides of the riotous mobs in Charlottesville.

He implores his fellow Democrats: “Do not glorify the violent people who are now tearing down the statues. Many of these people, not all of them, many of these people are trying to tear down America. Antifa is a radical, anti-America, anti-free market, communist, socialist, hard-left sensorial organization. They use violence. … I’m a liberal, and I think it’s the obligation of liberals to speak out against the hard-left radicals, just like it’s the obligation of conservatives to speak out against the extremism of the hard right.”

After being uniformly condemned by conservatives and most moderates, even House Minority Leader Nancy Pelosi finally condemned antifa, declaring, “Our democracy has no room for inciting violence or endangering the public, no matter the ideology of those who commit such acts. The violent actions of people calling themselves antifa in Berkeley this weekend deserve unequivocal condemnation, and the perpetrators should be arrested and prosecuted.” But that condemnation was hollow.

Even that most entrenched of the Trump-hating Leftmedia outlets, The Washington Post, is now playing catch-up. The paper recently ran a headline proclaiming, “Black-clad antifa members attack peaceful right-wing demonstrators in Berkeley.”

How dangerous is this latest iteration of communo-fascist malcontents?

Ahead of the 2016 presidential election, the FBI issued alerts to DHS about the increasing risk of antifa violence, noting that “anarchist extremists” were responsible for most of the political violence across the nation.

The antifa tactics clearly fall within the federal guidelines defining domestic terrorism, most notably that the intent is “to intimidate or coerce a civilian population,” and “to influence a state or federal government policy by intimidation or coercion.” Despite this, it will be difficult to officially label antifa a terrorist organization because, at present, it is not a formal organization but an amalgam of communist, fascist and anarchist political ideologies.

However, as previously noted, antifa is not an overtly formal organization — yet.