“The Science” has fallen victim to the Demos’ power agenda.

“They that can give up essential liberty to purchase a little temporary safety, deserve neither liberty nor safety.” —Benjamin Franklin (1759)

This week in the ChiCom Virus war, battles over vaxxing mandates and vax passports are heating up. Companies with more than 100 employees (an estimated 80 million workers), as well as municipal governments, are bearing the consequences of Joe Biden’s planned OSHA vaccine mandate.

Recall how last month, while attempting to divert the nation’s attention from a plethora of administrative failures, most notably his disgraceful surrender and retreat from Afghanistan, Biden admonished the unvaccinated, saying, “We’ve been patient, but our patience is wearing thin.” Contrary to his prior assurance, “I don’t think it should be mandatory,” this time Biden asserted, “Your refusal [to submit to vaccination] has cost all of us.” He declared he would ask OSHA to issue a vaccination mandate.

Clearly, Biden is in a lurch, because more Americans have died of COVID-19 this year than all of 2020. There have been 360,000 COVID deaths reported since January 1st, compared with 352,000 COVID deaths in the first 10 months of the pandemic. And Biden’s fearmongering has failed to spur more vaccinations — currently about 65% of Americans are fully vaccinated.

Thus, his abysmal public approval ratings notwithstanding, and amid a starved jobs market, Biden insists that companies and municipalities put their employees on notice: Get vaxxed or get fired. Many heeded his warning, but the deadlines they set are creating problems because significant numbers of employees are rejecting the mandates. In some municipalities, 30-40% of police and firefighters are refusing vaccines, either because they have already recovered from COVID or because they are healthy young people who are at very low risk.

On the corporate side, last weekend Southwest Airlines canceled more than 1,800 flights, ostensibly because of weather and because Jacksonville air traffic controllers were AWOL. The latter ATC staffing issue caused thousands of other flights to be routed far away to other controlled air space centers.

There is speculation that the Southwest cancellations were exacerbated by a pilot protest against the existing Biden executive order mandating that all federal employees, and by extension, all federal contractors, be vaccinated.

While the MSM dutifully reported that the cancellations were not related to Biden’s mandates, the pilots I contacted indicated that they were just covering for Biden. I asked several senior career airline pilots about whether the vax mandate was a Southwest factor versus the weather and scheduling issues. This response from another major carrier was representative: “The Biden mandate is the main factor. About 4,000 of our 15,000 pilots have not submitted the required documentation confirming they are in compliance. November 24th is drop dead date. Many will leave. Yearend travel is going to be FUBAR.”

Indeed, the day before the cancellations, the Southwest Airlines Pilots Association, their union, filed suit to block the vaccine mandate.

Notably, prompted by the cancellation debacle, Southwest CEO Gary Kelly declared: “I’ve never been in favor of corporations imposing that kind of a mandate. I’m not in favor of that. But the executive order from President Biden mandates that all federal employees and then all federal contractors, which covers all the major airlines, have to have a [vaccine] mandate … in place by December 8th, so we’re working through that.”

Biden’s authority to extend that order to contractors is questionable, as is his OSHA overreach. George Washington University law professor Jonathan Turley notes his mandate may not survive legal challenges now being prepared by 24 states.

If Biden does not back down on asserting his authority with federal contractors and his OSHA mandate, the disruptions could metastasize to other economic sectors, including transportation and logistics. If you think the toilet paper shortage last year was a problem, just wait until shipping and trucking union members decide to slow things down and choke our already strained supply lines.

The good news is that Biden has an out — particularly with the 40-80 million Americans who have already recovered from COVID. He can amend his executive order and the OSHA mandate to not only allow regular testing as an option to vaccination but also affirm that natural immunity is sufficient protection.

But Biden’s equally narcissistic and non compos mentis troll, Anthony Fauci, the nation’s highest-paid bureaucrat, most assuredly won’t tolerate any effort by Biden to backpedal. Fauci, who has been buried in the bowels of various Beltway bureaucracy bubbles since 1968 — five years before Biden first arrived in DC — is now the de facto head of what was, just 18 months ago, considered to be the private domain of individuals and private-sector enterprise.

As I have argued, the power-drunk Fauci has proven ad nauseam to be Donald Trump’s most consequential unforced leadership error. After three years of Trump’s outstanding domestic and foreign policy successes, especially reducing government constraints on economic growth, the little troll succeeded in doing what the Democrats repeatedly failed to do: He took down Trump. 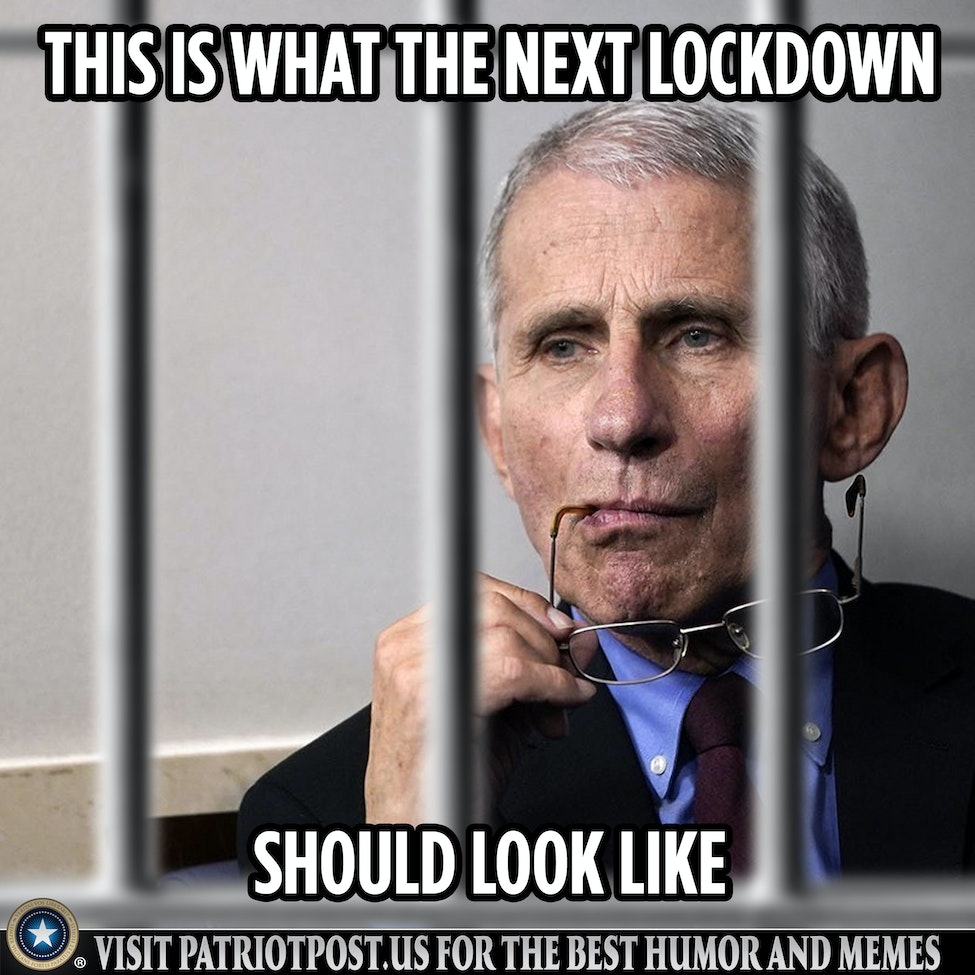 By Fauci’s estimates earlier this year, we should be well past herd immunity. But he keeps moving the goalposts for what constitutes herd immunity.

In December of last year, Fauci acknowledged “moving the goal posts.” According to The New York Times, “He is doing so, he said, partly based on new science, and partly on his gut feeling that the country is finally ready to hear what he really thinks.”

“Gut feelings”? What unmitigated paternalistic arrogance to suggest “the country is finally ready to hear what he really thinks.” Again, just what you would expect from a leach like this.

Given that Fauci has already been caught lying about his role in the NIH funding of the Wuhan virology lab’s gain-of-function research, yet is completely unable to accept any accountability, it is long past time for him to go.

Moreover, it is now apparent that Fauci refuses to acknowledge and affirm the efficacy of natural immunity, despite strong evidence it is more than sufficient.

Anytime now would be good.

Fauci’s flippant response prompted Sen. Ron Johnson (R-WI) to protest: “Almost 20 months into the pandemic, it is shocking that the chief medical advisor to the president does not have a firm grasp on the effectiveness of natural immunity. … This administration clearly does not want the public to question whether natural immunity is more effective than vaccines. As President Biden revealingly declared, the vaccine mandate ‘is not about freedom or personal choice.’ This administration’s decision to disregard the effectiveness of natural immunity and demand vaccination ignores current data and is an assault on all Americans’ civil liberties.”

In fact, there are now major studies affirming the efficacy of natural immunity, even suggesting it may be stronger and longer lasting than vaccination.

Johns Hopkins School of Medicine professor Dr. Marty Makary has declared: “There’s ample scientific evidence that natural immunity is effective and durable, and public-health leaders should pay it heed.” He estimates that more than 40% of Americans already have natural immunities.

But Fauci and the CDC have responded that natural immunity is all well and good, but getting the vaccine on top of the immunities would be even better. Thus, Biden’s executive order and OSHA mandates move forward.

No room for concession. Do as Biden and Fauci say and shut up.

As it turns out, “following the science” is now the most consequential victim of cancel culture — as I noted in “Big Tech’s Viral Vax Blackout.”

Perhaps one conflict of interest factor motivating Big Gov’s mandate is that, unlike the hundreds of billions in profits from COVID vaccinations, natural immunity is free! But don’t let that get out, or else the mere mention of “natural immunity "will be banned by the First Amendment suppressors.

In the meantime, Fauci’s position remains as follows: "There comes a time when you do have to give up what you consider your individual right of making your own decision for the greater good of society.”

In the end, failing to allow for natural immunity exemptions is not about “the science.” It’s about statist power, the stuff that fuels Biden and his leftist cadres. Biden and Fauci are so far beyond their expiration dates that they are in effect dead men walking and don’t care. The consequences of their actions will have no effect on them.

So, what’s next on the mandate battlefront? Biden has instructed states to prepare to vaccinate young children, who are at virtually no risk for serious illness from the virus.

Expect to hear more of those “hostile” Joe Biden chants!

Footnote: By way of disclaimer, I am not opposed to vaccinations, including CV19 vaccinations, especially for those over 60 and anyone with substantial comorbidity factors. I take an annual flu vaccination, and this has, in part, assured that I have not missed a day of work in a decade. But I am adamantly opposed to mandatory masking and vaccination by government diktat.

Thank you for supporting our nation’s premier online journal of American Liberty. Join us in prayer for our nation’s Military Patriots standing in harm’s way in defense of Liberty, for their families, and for our nation’s First Responders. We also ask prayer for your Patriot team, and our mission to, first and foremost, support and defend our Republic’s Founding Principles of Liberty, and to ignite the fires of freedom in the hearts and minds of our countrymen.