Democrat policies have turned the Golden Gate’s streets into a literal toilet. 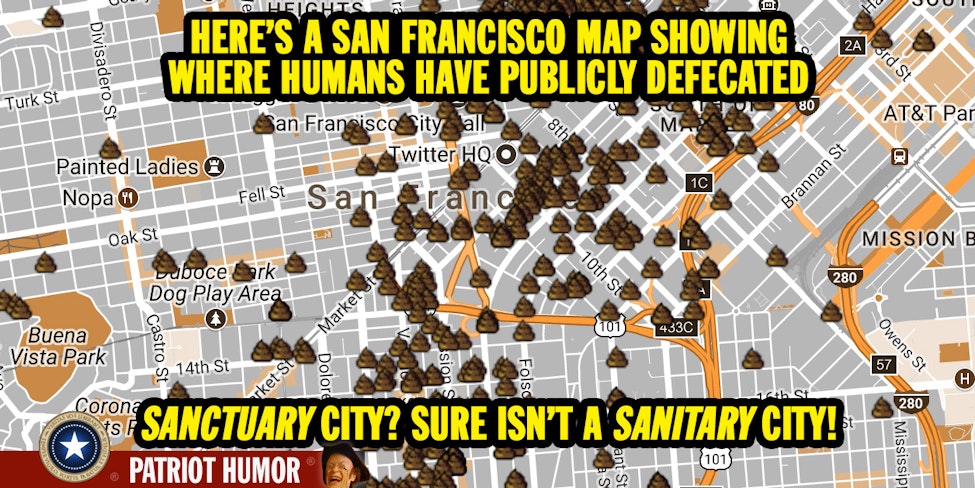 San Francisco — who would want to live in that feces hole? (Donald Trump allegedly had another word for such places.) That sentiment quite literally is a problem that the city’s newly elected Democrat Mayor London Breed is facing. You see, San Francisco has an excrement problem — an excrement problem directly linked to its massive population of homeless people. Some 7,500 vagrants are currently living (and doing their business) on the city’s streets. Breed recognizes the stinky problem, stating, “There is more feces on the sidewalks than I’ve ever seen growing up here. That’s a huge problem and we are not just talking about from dogs — we’re talking about from humans.” Well, at least admitting there’s a problem is a start.

Throwing money at the problem hasn’t helped. Last year alone San Francisco spent $275 million on supportive housing for the homeless. That was up from $241 million the year before, and this year the city is projected to spend upwards of $280 million.

Well, being the Democrat that she is, it appears that Breed’s instinct is to shift responsibility away from the homeless and onto those working with the homeless. Breed said, “I work hard to make sure your programs are funded for the purposes of trying to get these individuals help, and what I am asking you to do is work with your clients and ask them to at least have respect for the community — at least clean up after themselves and show respect to one another and people in the neighborhood.”

The root of San Francisco’s mess can be tied directly to decades of Democrats enacting their leftist policies. San Francisco has the highest rent in the world, coming in at an average of $3,500 a month. The median home price is a whopping $1.5 million, an amount that only 12% of residents can afford.

And the biggest contributor to this obscenely high cost of living is onerous laws. Columnist Rachel Alexander reports, “Zoning regulations and building codes have increased the cost of housing. Height restrictions waste valuable space. In much of the city, it is illegal to build anything taller than 40 feet. One resident built a ‘pod’ in his friend’s living room in order to obtain affordable rent, but the city found out and made him move out. Due to the high cost of living, a family making $117,400 annually is considered 'low income.‘ A family making $73,300 is 'very low income.’ The minimum wage is $15 an hour, but it’s not enough to rent a two-bedroom apartment. In order to live comfortably in San Francisco, an annual salary must be at least $110,000.”

Exorbitantly high cost of living and yet the city is increasingly becoming a slum. No wonder residents are leaving the city in droves. No U.S. city lost more residents in the last quarter of 2017 than did San Francisco. Here is yet another sad example of a long-time Democrat-controlled city whose residents are suffering — and smelling — the consequences.

The Threat From Biden’s Deadly Surrender and Retreat From Afghanistan