A Silver Lining in the GOP Cloud

Lessons from previous midterms elections should give conservatives some hope.

If I’d listened to progressive leftist messaging after the 2020 elections, I’d have believed the GOP, much like the Whig Party of the 1850s, was in its death throes and on its way to the ash heap of history. Ah, but isn’t that what the “Ministry of Truth” would like me to believe? While there were indeed very dark clouds swirling for conservatives and lovers of Liberty after Joe Biden’s questionable presidential win, those clouds have a silver lining that should give us all hope.

When you look at the result of midterm elections over the past three decades, you see significant “buyer’s remorse” in the composition of the House and Senate. In the 1994 elections, after Bill Clinton’s first two years in office, the House and Senate lurched hard right. Aside from a brief 2001-2002 interlude in the Senate after Jim Jeffords switched parties to give Democrats brief control, both chambers remained in Republican control until George W. Bush’s second midterm elections in 2006, when they both flipped to Democrat majorities.

Both chambers surged further left when Barack Obama was elected in 2008 but, after two years of seeing where the “anointed one” was taking us, they reversed course in the 2010 midterm elections. The House made a huge lurch back to Republican control. While the Senate also moved significantly right in 2010, it would take another four years before it too moved back into Republican control.

Currently, Democrats control the House by a mere eight seats. The Senate is evenly split 50-50, leaving the vice president to cast the deciding vote in a deadlock. In other words, leftists are holding on by the skin of their teeth, and they know it.

If history is a harbinger of things to come, we can expect “buyer’s remorse” in the 2022 midterm elections. Both the House and Senate should lurch far into Republican majority territory. If that occurs, it will neuter the president and the progressive Left’s agenda. 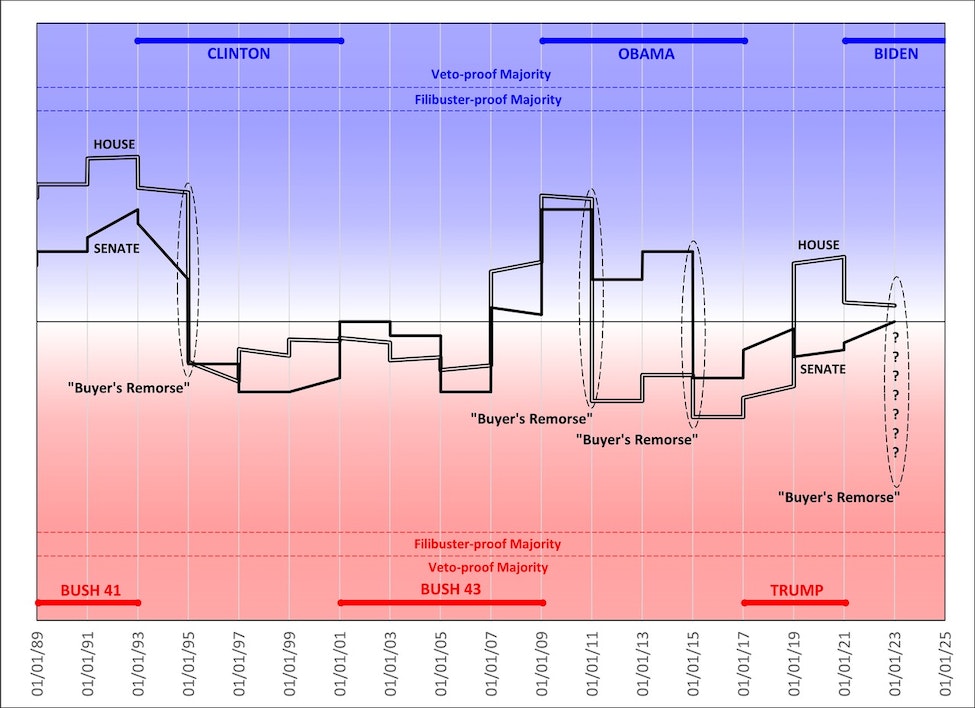 The Left was taught a lesson after ramming its agenda down the throats of Americans during Obama’s first two years in office while they controlled both chambers of Congress. When Republicans took control of the House in 2010 and the Senate in 2014, they helped prevent Obama from inflicting too much further significant damage during his last six years in office.

Leftists aren’t going to let that happen again. This explains why they are frantically implementing their agenda during Biden’s first two years in office. They know if they can get their programs and policies implemented now, the chance that a Republican-controlled Congress will reverse that is slim. One need look no further than ObamaCare to validate that assessment.

As Ronald Reagan famously said in 1964: “No government ever voluntarily reduces itself in size. Government programs, once launched, never disappear. Actually, a government bureau is the nearest thing to eternal life we’ll ever see on this earth.”

The ultimate question is where the GOP learned a lesson. What will Republicans do when they retake Congress in the 2022 midterm elections? Will they have the intestinal fortitude to cleanse the viruses and parasites that the progressive Left is injecting into America’s body? Or will they, à la ObamaCare, simply allow the infection to go on untreated?

In November 2022, we need to ensure that we elect Republicans who will truly take back America. If we don’t, we will squander that silver lining we now see in the storm clouds swirling around us.