To our readers: Your generosity and commitment have made it possible to offer The Patriot Post without a subscription fee to military personnel, students and those with limited means — for over 23 years! Please support The 2020 Patriots' Day Campaign today.
Support Liberty
Right Opinion

The AGW Agenda is on a major offensive now. The election, Hurricane Sandy, the warm start to winter in the U.S. (that will switch around) and the latest World Climate Conference, has lead to a barrage of disinformation.

Their strategy is to come out with strongly worded ideas on impending doom, use the current weather if it’s warm (or there was a major storm) and tell the public this is proof.

Through it all, the facts remain that the science, economics and social high ground is on the side of those that don’t believe in human induced global warming, for the economies of the world would prosper most with all forms of energy being used, as billions of people are being sentenced to a life of little hope with no change to their fate in sight.

The more I study this, the more I cannot figure out, using common sense, how this argument is raging. The AGW side claims there is no doubt, yet if we look at actual facts, it appears that there is not only doubt, but evidence CO2 cannot be a factor in regulating climate. It may react to the climate, but it is not the driver.

First of all, from a piece by Dr. Robert Brown at Duke University, “On certainty: Truth is the Daugher of Time”:

“[T]he Ordovician Silurian ice age began with CO2 levels of 7000 ppm. That is around 17 times the current level, almost 1% of the atmosphere CO2 – and persisted for millions of years with CO2 levels consistently in the ballpark of 4000 ppm.”

This immediately calls into question the idea that CO2 causes warming. Is one to argue that the ice age would have even been colder with lesser amounts of CO2?

But there is much more, though I will only show a few.

Climatologist Cliff Harris and Meteorologist Randy Mann have constructed a chart of global temperatures with their projection of temperatures to 2040 (which I don’t agree with – I believe it will cool). While Cliff, Randy and I can argue about the coming weather, we are all in agreement on the past:

I don’t believe this shows up in Al Gore’s movie. This is an inconvenient truth that he did not want you to see.

And since the start of the satellite era, when we can measure temperatures objectively, temperatures have looked like this with CO2 on its merry way up, while ocean temps and air temps seem to be moving in tandem:

But apparently global warming is occurring faster than “we thought.” Kind of odd since the models they based all this on are plainly wrong: 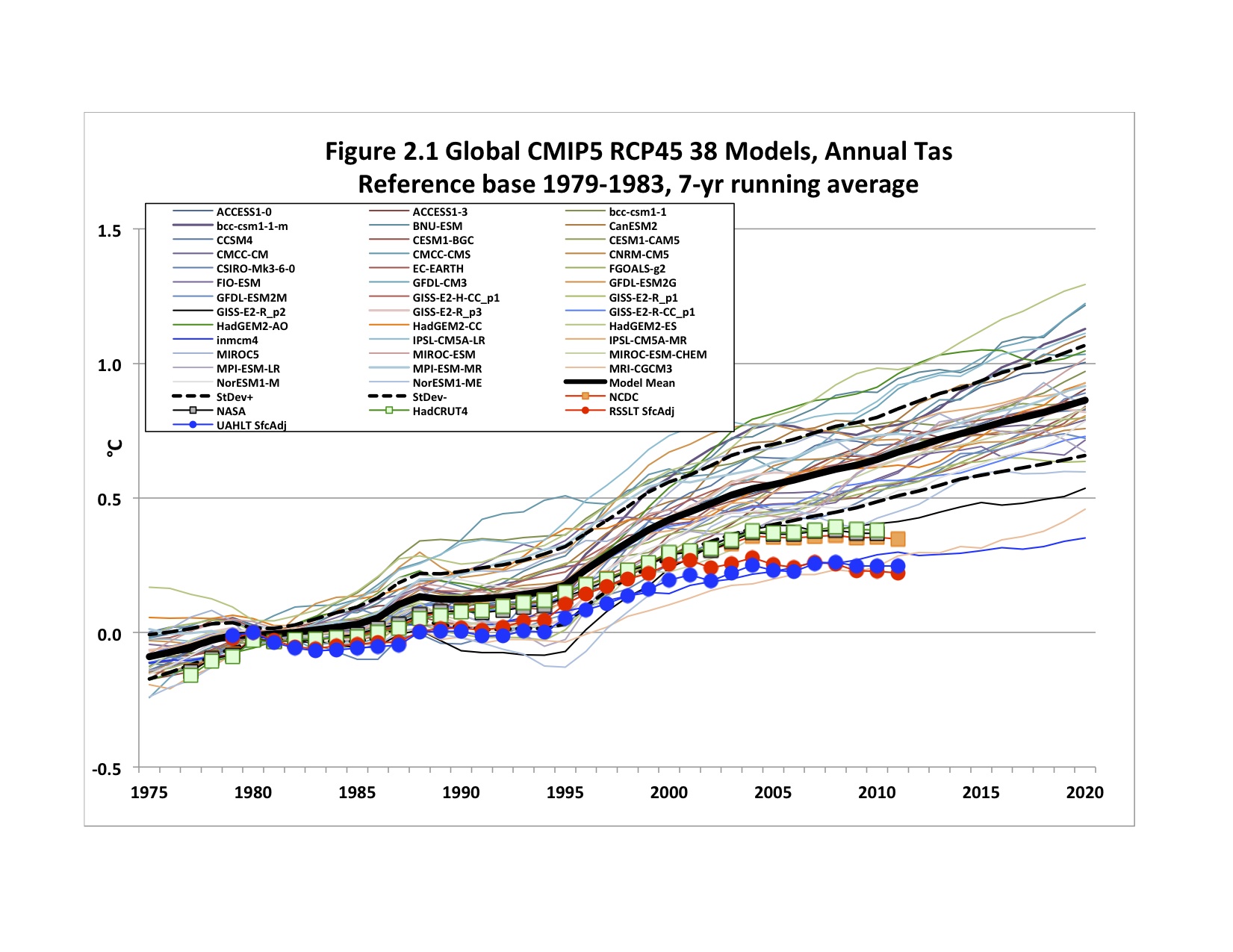 Let’s look at the absurd notion that CO2 is leading to the increase in hurricane related disasters.

This chart by Dr. William Gray of Colorado State shows us that as CO2 rises, the hits on the U.S. Coast by major hurricanes has fallen: 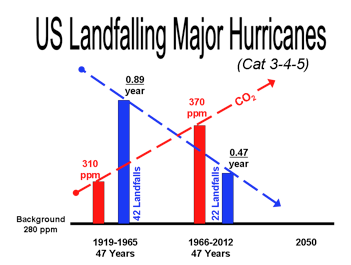 I want to be clear: I would never say that more CO2 means less major hurricane hits because I don’t think CO2 has anything to do with it. So you don’t see me “spinning” this to say that. BUT IT SURELY CAN’T MEAN THAT IT MEANS THERE ARE MORE MAJOR HURRICANES HITTING, BECAUSE THE FACTS SAY THE OPPOSITE! So saying that is simply lying. Let’s call it what it is.

The use of Sandy as an example of CO2 induced disasters on the way is pure deceit. Trying to use an event that is a) not indicative of CO2 induced warming and b) uses only one example on the East Coast – where hurricane activity is long overdue given the natural cycle – as evidence of the impending global problem, is again deceit.

As far as the ice caps, the northern ice cap is well below normal, but since the turn of the Pacific to colder, the western part of the cap around Alaska has experienced record growth. The northern ice cap will recover once the current warm cycle of the Atlantic ends, which should be in 10 years. But lack of ice is nothing new here:

But the outright lie has to do with the southern hemisphere ice, which hit a record high this year in their cold season

It’s been nice and warm in the U.S. this past week, but get ready: Winter is coming (it has already started in the plains) and lest we forget, there were 2 snow events in the I-95 corridor from Philadelphia northeastward in November, a rare event. But did the AGW people let you know what is going on in Europe, or the far east, or Alaska where November was the coldest on record, BEATING LAST YEAR’S RECORD? It was 10 years ago that AGW people were saying that snow and cold would be increasingly rare in Europe, and this is now the 4th severe winter in a row with winter weather causing havoc.

Alaska – the supposed Canary in the coal mine of global warming because it was warm when the Pacific was in its warm phase – is in for yet another severe winter with record rapid ice growth in the seas around them. Frozen canaries can’t sing.

It is clear what the strategy is. Al Gore claims the earth has a fever (no, the solution is not “more cowbell” for you SNL fans). Instead, it’s to debunk AGW claims at every turn.

In fact, the AGW idea is akin to filling up your bathtub with hot water, noticing that the air in the bathroom warms and the mirror steams up, and then concluding it was because you turned on the light when you went in.

We own the high ground, the science, the economic and the social aspects of this fight. There is no reason to be on the defensive when you are in the right, and the use of facts in the face of the opposition and demanding they explain their positions against these facts is the way to counter this assault.

The 'Love America Pledge' Is Proof Civil Society Is Alive

There is no shortage of negative news right now. The uncertainty surrounding the COVID-19 pandemic has put millions of Americans out of work. People are scared to buy food at the grocery store and wonder when things will ever begin to feel normal again.

The world will see them as a number. To everyone else, they were high school baseball coaches, single moms, nurses, priests, songwriters, teachers, and grandparents. They were veterans of World War II and rabbis who survived the Holocaust. They beat breast cancer, lung cancer, poverty, and old age. But they could not beat this. Almost 13,000 Americans — everyone of them someone's daughter or son. Every one of them with an ending written partially by one nation: China.

Trump vs. the WHO

President Trump Tuesday slammed the World Health Organization for "missing the call" on the coronavirus, and he blasted the organization for its "very China-centric" approach. Trump also said he would "strongly consider" cutting off U.S. funding, more than half a billion dollars a year, to the global body.

The coronavirus has brought our bustling nation, and life as we know it, to a grinding halt.

I'll Have the Chicken Testicle Soup — Hold the Deadly Virus

It's probably a coincidence, but I notice that as businesses go under, jobs are lost, careers are ended and trillions of dollars are drained from the economy, the people most avidly pushing the coronavirus panic are doing quite well.

"I will not believe our labors are lost. I shall not die without a hope that light and liberty are on a steady advance." —Thomas Jefferson (1821)
More Founders' Quotes