Part of our core mission? Exposing the Left's blatant hypocrisy. Help us continue the fight and support the 2022 Year-End Campaign now.

On 4 March 1921, the United States Congress approved burial of an unidentified American serviceman from World War I in the new Memorial Amphitheater Tomb at Arlington National Cemetery. On 11 November 1921, that unknown soldier, who was returned from the battlefields of France, was interred below the three-level marble Tomb.

What follows are questions about the sentinels at the Tomb.

How many steps does the guard take during his walk across the Tomb of the Unknown and why?

21 steps. It alludes to the twenty-one gun salute, which is the highest honor given any military or foreign dignitary. 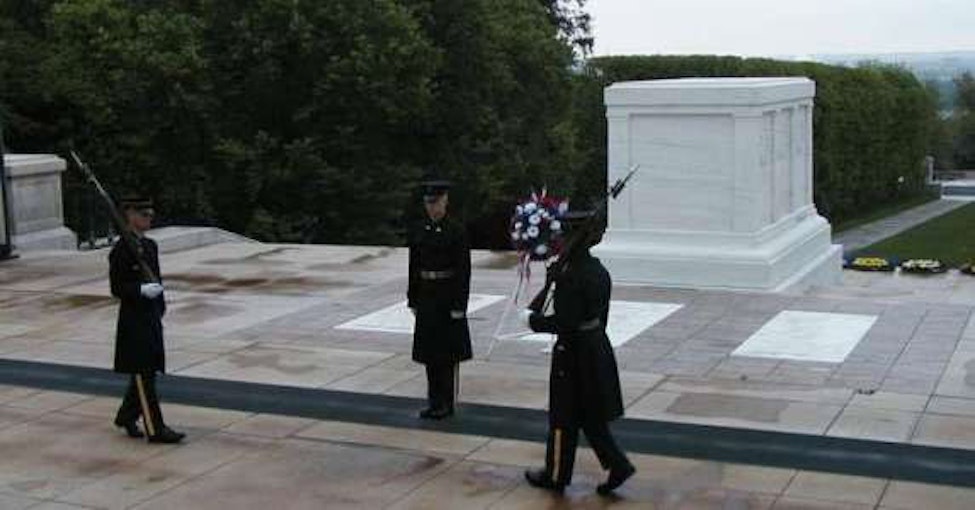 How long does the Sentinel hesitate after his about face to begin his return walk and does he carry his rifle on the same shoulder all the time, and if not, why not?

He does not execute an about face. He stops on the 21st step, then turns and faces the Tomb for 21 seconds. Then he turns to face back down the mat, changes his weapon to the outside shoulder, counts 21 seconds, then steps off for another 21 step walk down the mat. He faces the Tomb at each end of the 21 step walk for 21 seconds. The Sentinel then repeats this over and over until he is relieved at the Guard Change. 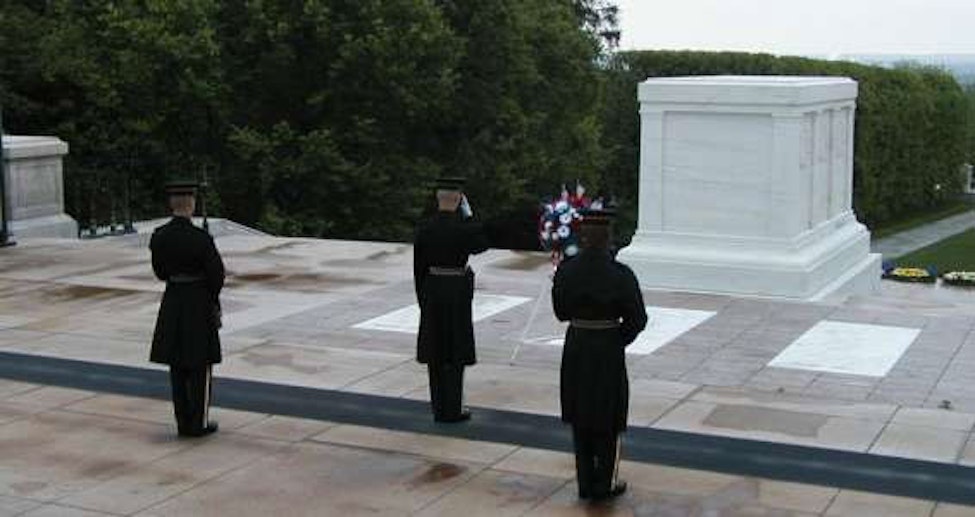 Why are his gloves wet?

His gloves are moistened to improve his grip on the rifle. 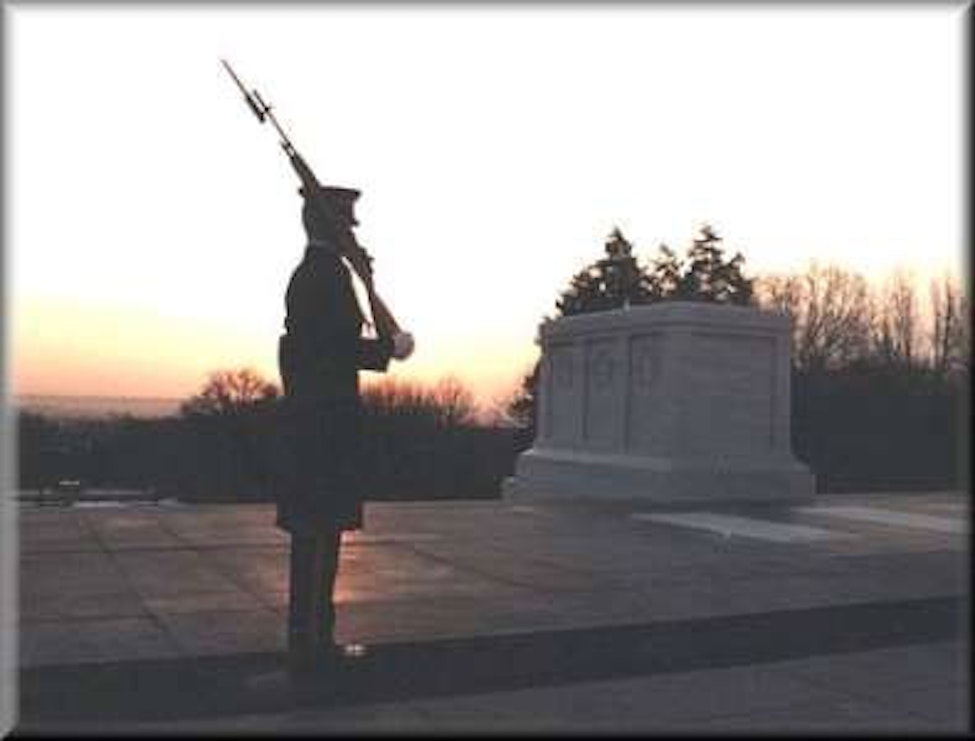 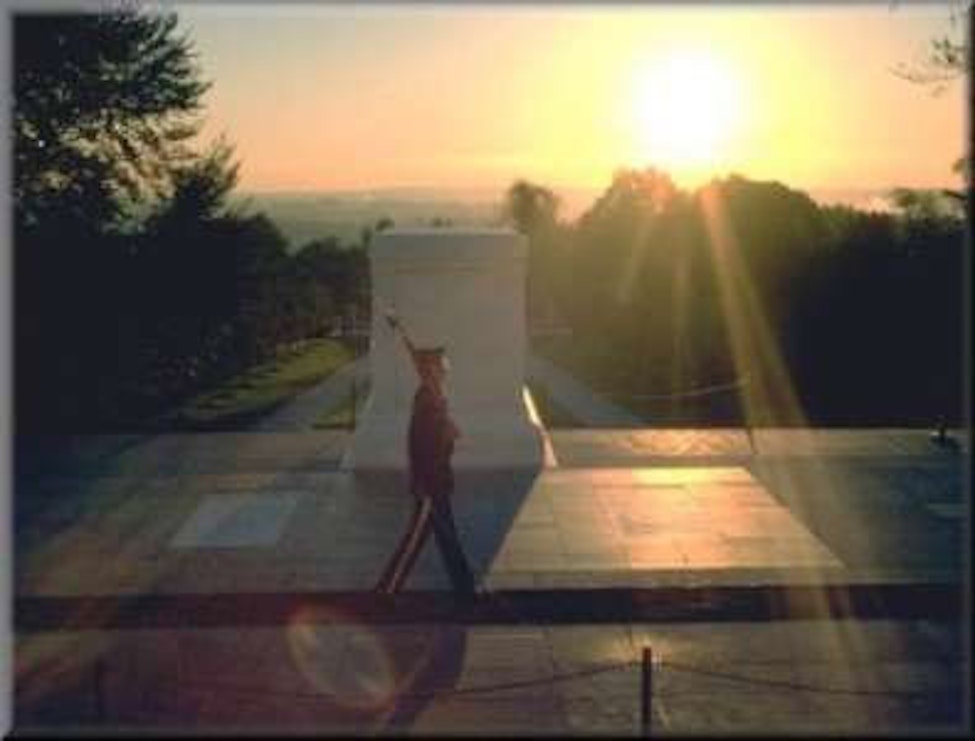 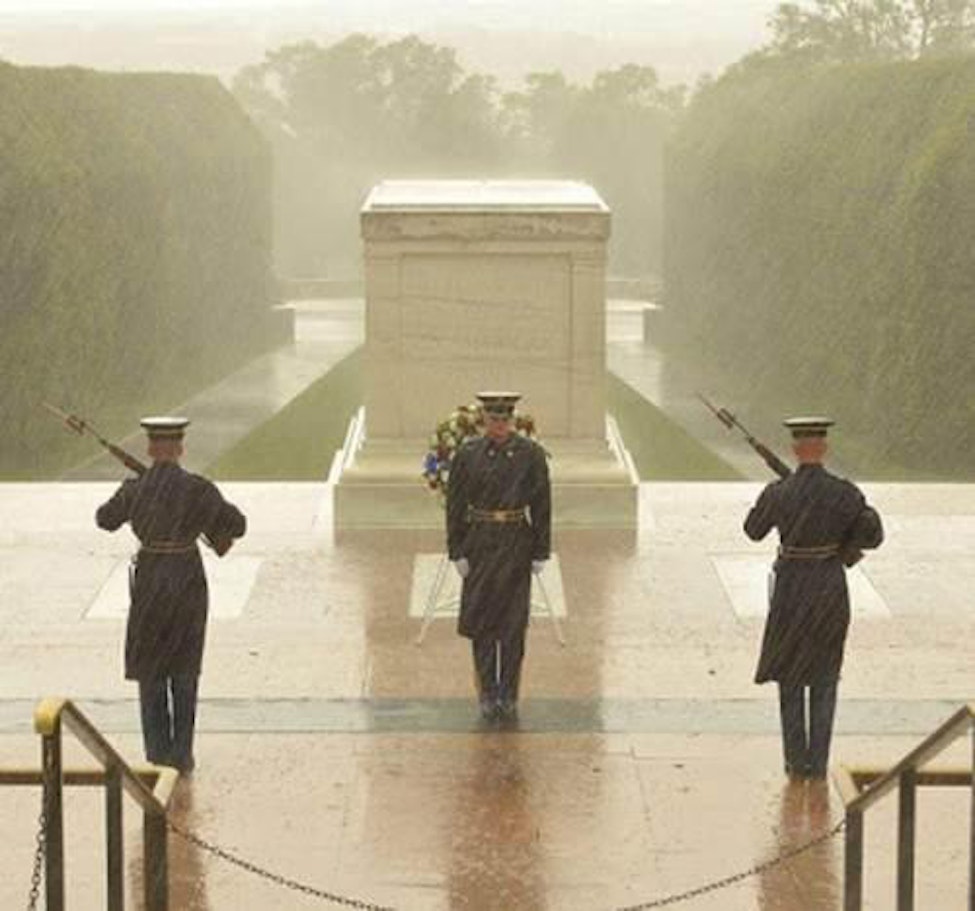 How often are the guards changed? 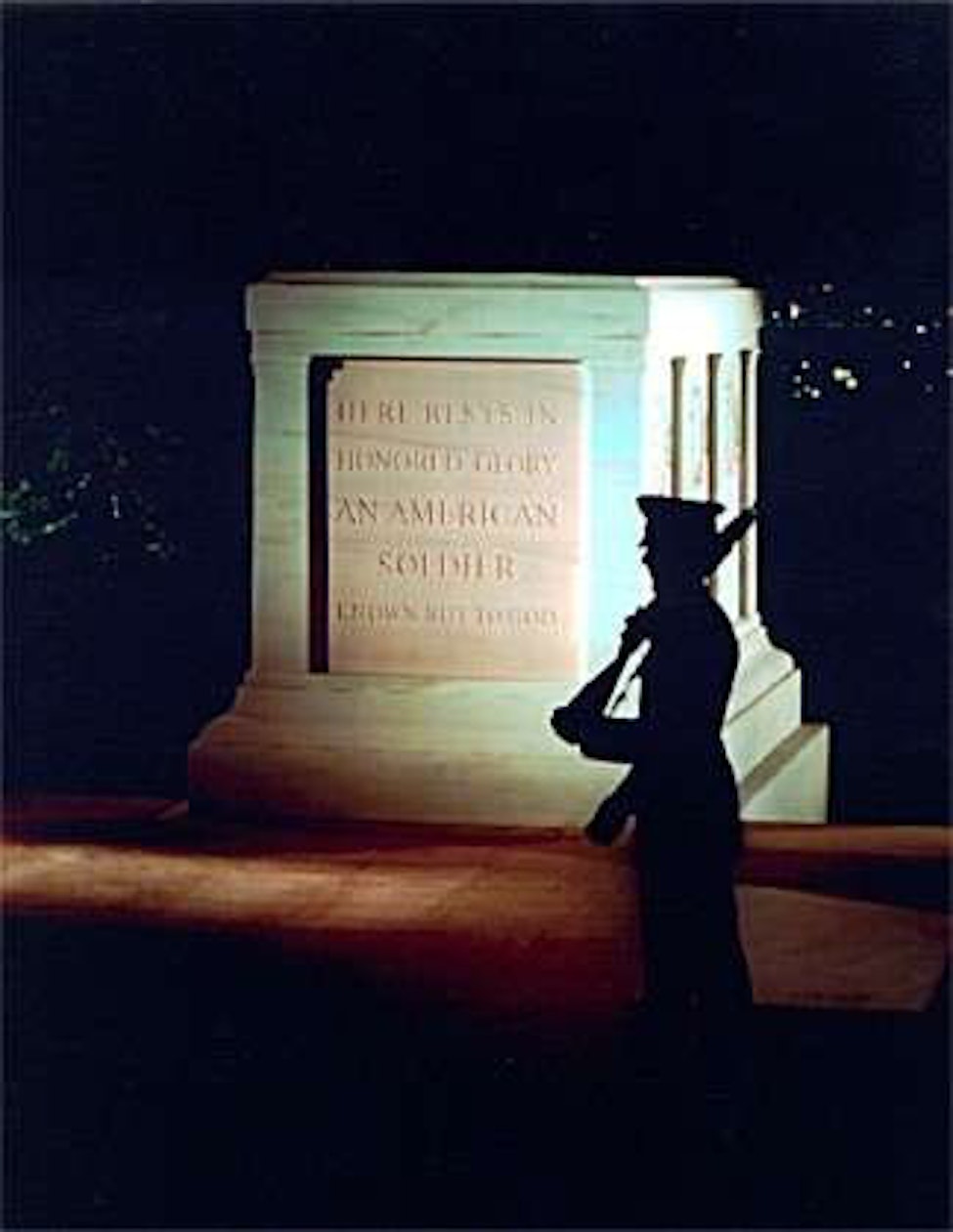 Is it true they must commit 2 years of life to guard the Tomb, live in a barracks under the tomb, and cannot drink any alcohol on or off duty for the rest of their lives.

No, this is a false rumor. The average tour at the Tomb is about a year. There is NO set time for service there. The Sentinels live either in a barracks on Ft. Myer (the Army post located adjacent to the cemetery) or off base if they like. They do have living quarters under the steps of the amphitheater where they stay during their 24 hour shifts, but when they are off, they are off. And if they are of legal age, they may drink anything they like, except while on duty.

Is it true they cannot swear in public for the rest of their lives?

Is it true after two years, the guard is given a wreath pin that is worn on their lapel signifying they served as Guard of the Tomb, that there are only 400 presently worn, and that the Guard must obey these rules for the rest of their lives or give up the wreath pin?

The Tomb Guard Identification Badge is awarded after the Sentinel passes a series of tests. The Badge is permanently awarded after a Sentinel has served 9 months as a Sentinel at the Tomb. Over 500 have been awarded since its creation in the late 1950’s. And while the Badge can be revoked, the offense must be such that it discredits the Tomb. Revocation is at the Regimental Commanderís discretion. But you can drink a beer and even swear and still keep the Badge. The Badge is a full size award, worn on the right pocket of the uniform jacket, not a lapel pin. 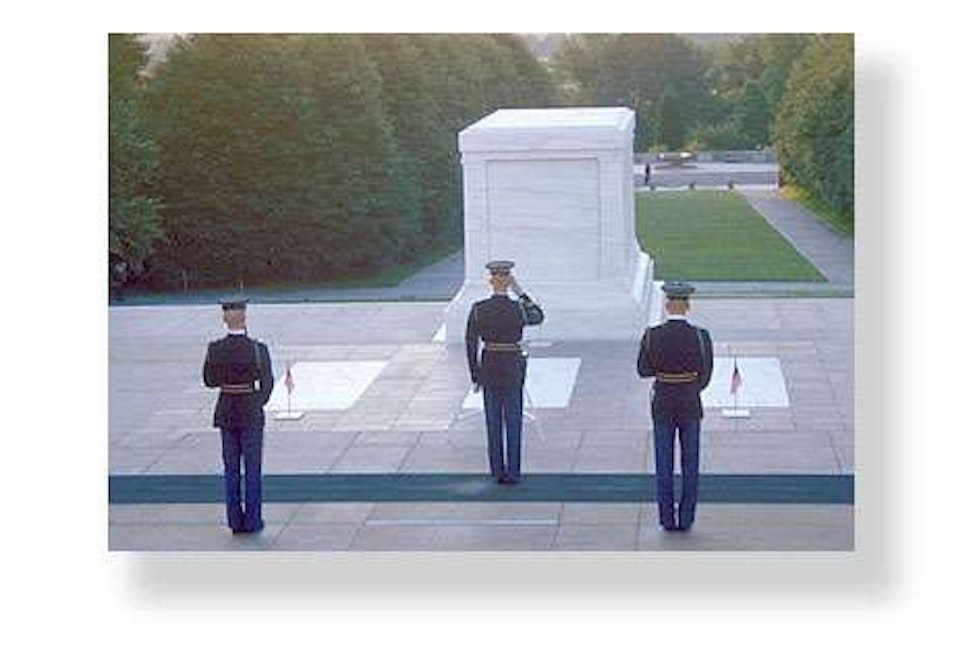 Are the shoes specially made with very thick soles to keep the heat and cold from their feet?

The shoes are standard issue military dress shoes. They are built up so the sole and heel are equal in height. This allows the Sentinel to stand so that his back is straight and perpendicular to the ground. A side effect of this is that the Sentinel can “roll” on the outside of the build up as he walks down the mat. This allows him to move in a fluid fashion. If he does this correctly, his hat and bayonet will appear to not “bob” up and down with each step. It gives him a more formal and smooth look to his walk, rather than a “marching” appearance.

The soles have a steel tip on the toe and a “horseshoe” steel plate on the heel. This prevents wear on the sole and allows the Sentinel to move smoothly during his movements when he turns to face the Tomb and then back down the mat.

Then there is the “clicker”. It is a shank of steel attached to the inside of the face of the heel build-up on each shoe. It allows the Sentinel to click his heels during certain movements. If a guard change is really hot, it is called a “smoker” because all the heel clicks fall together and sound like one click. In fact, the guard change is occasionally done in the “silent” mode (as a sign of devotion to the Unknowns"). No voice commands - every thing is done in relation to the heel clicks and on specific counts.

How many times will a Soldier be on duty during the shift?

Each Relief (team) has a rotation during the 24 hour work day. This rotation is dependent on the number of Soldier-Sentinels who are proficient enough to guard the Tomb. The standard is 3-4 qualified Sentinels, 1-2 Relief Commander/Assistant Relief Commander, and 1-2 Sentinels in training. Generally, the Sentinel will be on guard duty for a tour and have two tours off in between - then go out for another tour. However, in extreme cases, Sentinels have been known to go back-to-back for the entire 24 hour shift. 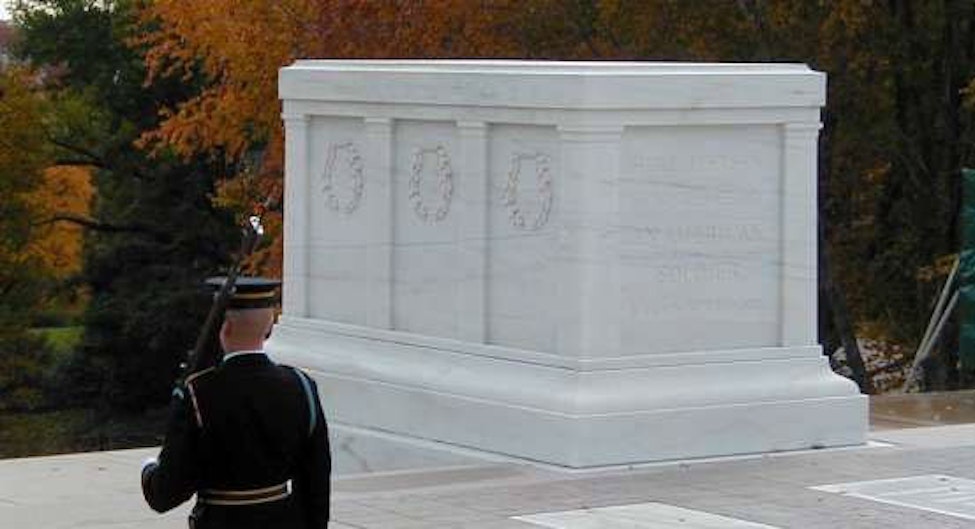 Information from Society of the Honor Guard - Tomb of the Unknown Soldier.

“The latent causes of faction are thus sown in the nature of man.” —James Madison (1787)