When Debating a Liberal, Start With First Principles

“On every question of construction, carry ourselves back to the time when the Constitution was adopted, recollect the spirit manifested in the debates and instead of trying what meaning may be squeezed out of the text or invented against it, conform to the probable one in which it was passed.” –Thomas Jefferson 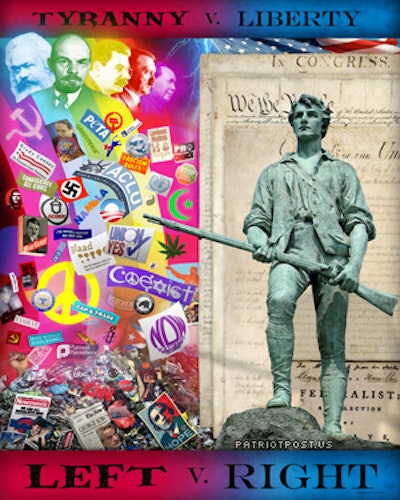 There are only two rules you need to know when debating a liberal.

Rule Number One: You must define the debate in terms of First Principles, which is to say, you must be able to articulate those principles. (Read Essential Liberty for more.)

Conservatives subscribe to the fundamental doctrine of Essential Liberty as enumerated by our Founders in the Declaration of Independence and our Constitution. We understand that individual responsibility is the foundation of a free society. We advocate for the restoration of constitutional limits on government and the judiciary. We promote free enterprise, national defense and traditional American values.

In short, conservatives endeavor to conserve Rule of Law as our guiding principle, and any legitimate policy debate must start there.

Liberals, on the other hand, subscribe to principles du jour; whatever solution feels best for the day’s most popular, fashionable, or prominent cause célèbre.

In short, they believe that the feel-good solution (a.k.a. “rule of man”) supersedes Rule of Law.

For the most part, today’s liberals are a case study in hypocrisy, the antithesis of the once noble Democrat Party, the party of Thomas Jefferson.

Liberals speak of unity, but they incessantly foment disunity, appealing to the worst in human nature by dividing Americans into constituent dependencies. They speak of freedom of thought – except when your thought doesn’t comport with theirs. They assert First Amendment rights – except when it comes to religion or speech that doesn’t agree with theirs. They promote tolerance – except while practicing intolerance and seeking to silence dissenters.

Liberals deride moral clarity because they can’t survive its scrutiny. They protest for the preservation of natural order while advocating homosexuality. They denounce capital punishment for the most heinous of criminals while ardently supporting the killing of the most helpless and innocent among us – babies before birth, the infirm and the aged.

Liberals loathe individual responsibility and advocate statism. They eschew private initiative and enterprise while promoting all manner of government control and regulation.

Now, I’m not suggesting that everything liberals believe or support is wrong, but their underlying philosophical doctrine surely undermines our “unalienable right to life, liberty and the pursuit of happiness,” as established by “the laws of nature and nature’s God.”

As Ronald Reagan observed, “The trouble with our liberal friends is not that they’re ignorant; it’s just that they know so much that isn’t so.”

Thus, don’t be snookered into defending or denouncing the merits of any issue as framed in liberal terms. Such deliberations are rarely resolved and tend to end in gridlock, or worse, deadlock. (If congressional Republicans really want to end gridlock, they too need to control the debate in terms of First Principles.)

One means of taking control of a debate is to inquire whether an opponent has ever taken an oath to “support and defend” our Constitution. (If you have not, or wish to reaffirm your oath, then we invite you to do so by registering with The Essential Liberty Project.

If your opponent answers “yes,” then inquire as to which constitution – the one upon which our nation was founded, or the so-called “living constitution” adulterated by generations of legislative and judicial diktat.

Of course, you must be prepared to explain the difference – to explain that only one of these constitutions exists in written form, while the other is a mere fabrication. This can be best accomplished by presenting your copy of the Essential Liberty Guide.

Another means of framing the debate is to ask your opponent to articulate the difference between constitutional Rule of Law and the rule of men. Again, you must be prepared to explain the difference.

You may also start by asking your opponent what “liberal” means. Most liberals will define “liberal” in terms of the issues they support, so ask your opponent if those issues comport with our Constitution.

Once you’ve framed the debate in terms of First Principles, give your liberal opponent a recess, and a copy of the Essential Liberty Guide.

Principled liberals (admittedly an oxymoron) will remain satisfied that what they feel is equivalent to, or even supersedes, Rule of Law. These poor souls are on their way to becoming über liberals, or Leftists, and are probably beyond any logical redemption.

But if you use your Essential Liberty Guide as an education tool rather than a hammer, some liberals may actually start to come around, and this conversion should be your primary objective.

Further, if confronted by your opponent with a challenge to provide a constitutional defense for some Republican legislation, don’t bite. Most Republican legislation, though it may be more in line with our Constitution, rarely comports with the plain language of Rule of Law. Don’t let your opponent frame you as a hypocrite. Remember: You are, first and foremost, a constitutional conservative, not a tool of any political party.

Rule Number Two: You must distinguish between liberals and Leftists. The former subscribe to a plethora of contemporaneous solutions, while the latter are bona fide “useful idiots,” those Western apologists for socialist political and economic agendas that terminate with the institution of Marxist-Leninist-Maoist collectivism masquerading as regulation and taxation.

When it comes to debating Leftists, the outcome is utterly dependent on who has superior firepower.