Royal Pains in the Arse

It’s long past time for a Royal flush.

Apparently, the Brits have invaded, again. The American tabloid media, which is to say most of the American media, is obsessed with the latest ad-revenue generators, a couple of West Coast Royal imports.

For the record, let me be clear: My concern about British Monarchy whining ended on April 19, 1775, at Lexington and Concord! But so amusing is this tale of Royal family fiction that I could not let the asininity pass without comment.

In 2018, the younger of the Prince and former Princess of Wales’s sons, Henry Charles Albert David, or “Harry,” the Duke of Sussex, hooked up with an American B-list TV actress, Meghan Markle, the now-Duchess of Sussex. A year after the Queen Mother paid for their $45 million wedding, the wholly unaccomplished Harry, and his even less accomplished spouse, had a son, Archie Mountbatten-Windsor — the only actual victim in this sordid fairytale.

In 2020, the celebrated couple announced their intention “to step back as ‘senior’ members of the Royal Family” in order to “carve out a progressive new role” and “work to become financially independent.” Right.

To execute their plan, they moved to California and settled into a humble $15 million hut. From there, they have launched a cottage industry based on their “victimization,” especially because the poor Duchess identifies as “mixed race,” half-black (or is it half-white?). To be fair, they were both childhood victims of their parents’ divorces, and the tragically broken family consequences, which in large measure account for their emotionally arrested development.

So embarrassingly woke are they that, in honor of their slumming pretense, Time magazine awarded them a spot on its 100 most influential people. However, the great irony of their new wokester role is that these inheritance welfare leftists – hubby Harry, and by extension Meghan, being a quintessential example of the effluent of generational wealth and privilege – are in the news, ostensibly for divesting themselves of their Royal privilege. Irony being the only reason they are in the news is because they are trading on their Royal family privilege.

And these two attention sucks are excelling.

Drama queen Meghan tearfully claimed she has finally been “liberated” by the opportunity to tell their story of struggle and hardship to the queen of tabloid TV, billionaire Oprah Winfrey. Oprah emerged from her $100 million Montecito estate to lend a shoulder to the weeping Royals in what was the first episode of their faux reality TV show, “The Windsors.”

Right on cue, Meghan’s race-card accusation that little Archie is being denied the title of “Prince” because he is mixed race was the booster engine for her racial victimization charade. Shades of Jussie Smollett! Of course, the MSM is more interested in an accusation of Royal racism than a well-founded accusation of Royal pedophilia.

But wait, complaining about hereditary titles…I thought Harry and Meghan were divesting themselves of hereditary Royal privilege?

So compelling were their Royal pain and suffering disclosures that they surely deserve an Oscar, or should at least get Andrew Cuomo’s Emmy once the International Academy of Television Arts and Sciences rescinds it.

Perhaps the best summary of their performance was from former CNN tabloid commentator and current “Good Morning Britain” tabloid commentator Piers Morgan, who, in keeping with his British tradition of excessive effusiveness, observed: “Meghan and Harry’s nauseating two-hour Oprah whine-athon was a disgraceful diatribe of cynical race-baiting propaganda. … Sickening. Shameful. Self-pitying. Salacious. Scandalous. Sanctimonious. Spectacularly self-serving.” Morgan added, “Those were just my initial thoughts after ten minutes of the Oprah whine-athon with Meghan and Harry, and while restricting myself to only using words beginning with the letter ‘s’. By the time I’d finished the whole two-hour orgy of pious, self-indulgent, score-settling twaddle, the steam was erupting out of my ears like an exploding geyser, and my lexicon of rageful epithets extended to the full range of the alphabet.”

Well done, Piers! Now, it is important to know your audience and given the time slot of your morning show, undoubtedly a large part of your audience are Meghan’s woke women fans. Thus, time to resign!

A day after walking off the set of his morning show, Morgan doubled down on the Royal whinathon: “I said I didn’t believe Meghan Markle in her Oprah interview. I’ve had time to reflect on this opinion, and I still don’t. If you did, OK. Freedom of speech is a hill I’m happy to die on. I’m off to spend more time with my opinions.”

That most erudite of cultural commenters, Mark Steyn, observed: “The queen is a survivor. She saw off the Diana celebrity cult, and she will see off the far more diminished and even more pathetic Meghan cult. … A majority of the British people want them stripped of their titles.”

Dear reader, if you sense I could not give a flying flip about these laughable Royal idiots, much less any other celebrity leftists, you would be correct. It’s long past time for a Royal flush! 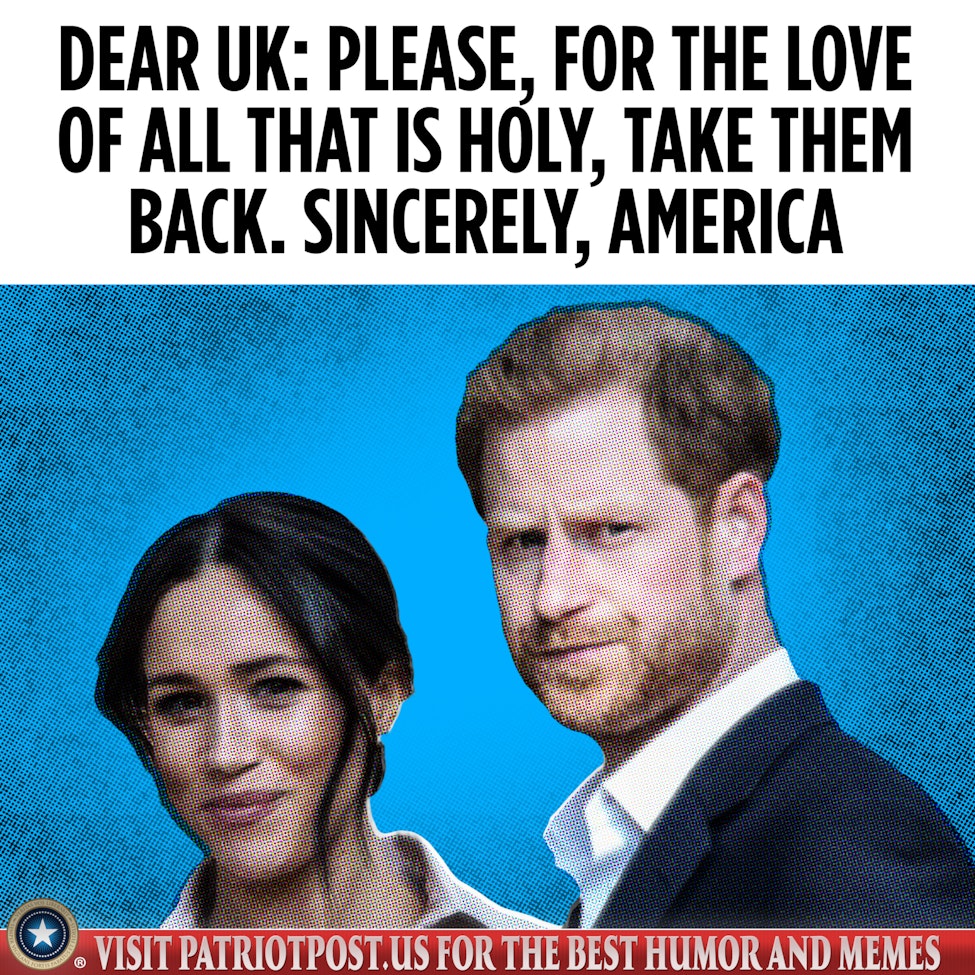 Red States to the Rescue

“Children should be educated and instructed in the principles of freedom.” —John Adams (1787)