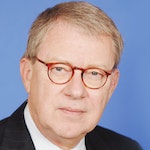 Michael Barone is a senior political analyst for the Washington Examiner, resident fellow at the American Enterprise Institute and longtime co-author of The Almanac of American Politics. He grew up in Detroit and Birmingham, Michigan. He graduated from Harvard College (1966) and Yale Law School (1969), and was an editor of the Harvard Crimson and the Yale Law Journal.

Barone served as law clerk to Judge Wade H. McCree Jr. of the United States Court of Appeals for the Sixth Circuit from 1969 to 1971. From 1974 to 1981, he was vice president of the polling firm of Peter D. Hart Research Associates. From 1981 to 1988, he was a member of the editorial page staff of The Washington Post. From 1996 to 1998, he was senior staff editor at Reader's Digest.

Barone is the principal co-author of The Almanac of American Politics, published by National Journal every two years. The first edition appeared in 1971, and the 17th edition, The Almanac of American Politics 2004, appeared in July 2003. He is also the author of Our Country: The Shaping of America from Roosevelt to Reagan (Free Press, 1990), The New Americans: How the Melting Pot Can Work Again (Regnery, 2001) and Hard America, Soft America: Competition vs. Coddling and the Competition for the Nation's Future (Crown Forum, May 2004).

Over the years, Barone has written for many publications, including The Economist, The New York Times, The Detroit News, the Detroit Free Press, The Weekly Standard, The New Republic, National Review, The American Spectator, American Enterprise, The Times Literary Supplement and The Daily Telegraph of London. He is a contributor to the Fox News Channel and has appeared on many other television programs.

Barone lives in Washington, D.C. He has traveled to all 50 states and all 435 congressional districts. He has also traveled to 37 foreign countries and has reported on elections in Russia, Mexico, Italy and Britain.