“We should be unfaithful to ourselves if we should ever lose sight of the danger to our Liberties if anything partial or extraneous should infect the purity of our free, fair, virtuous, and independent elections. If an election is to be determined by a majority of a single vote, and that can be procured by a party through artifice or corruption, the Government may be the choice of a party for its own ends, not of the nation for the national good.” –John Adams, Inaugural Address, 1797

All around us, there are imminent and ominous threats to the future of American Liberty. None, however, is more grave than the demolition of free enterprise by those who would replace it with the authoritarian rule of Democratic Socialism envisioned by Barack Hussein Obama and his leftist comrades.

Rancorous political debate is currently focused on competing solutions for our failing domestic economy and the collapse of our esteemed standing among the nations of the world. 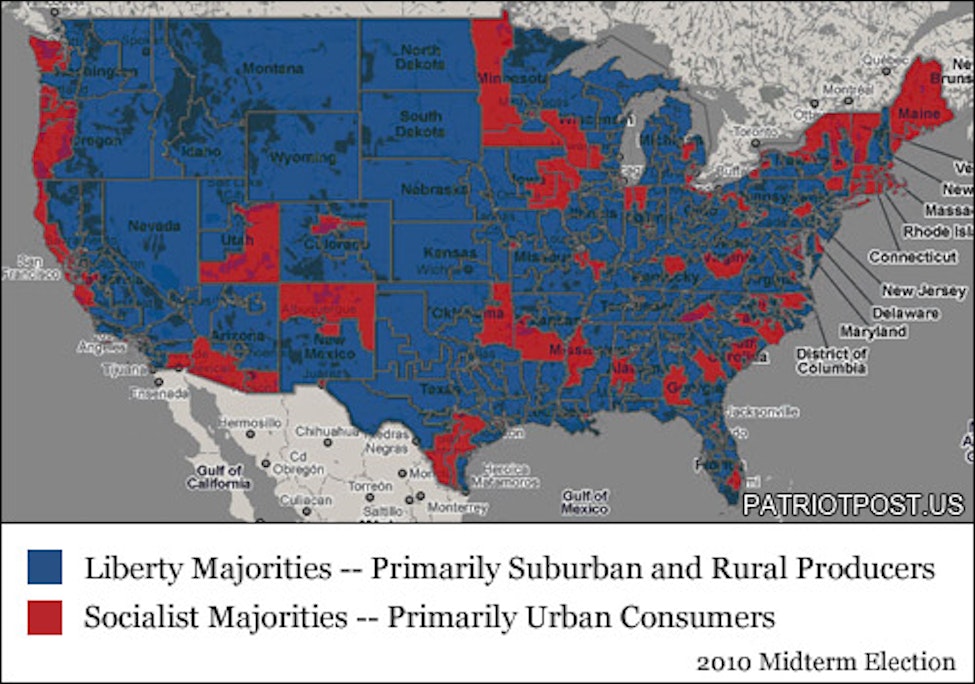 Conservatives, particularly those resolute constitutional constructionists who identify with the much-maligned Tea Party Movement, rightly understand, as did Ronald Reagan, that “government is not the solution to our problem; government is the problem.” That is why we are advocating for the restoration of constitutional limits on the central government.

Conversely, the growing ranks of leftists in Congress, some 80 of whom are openly members of the Socialist Party of America’s Congressional Progressive Caucus, led by Reps. Raúl Grijalva (D-AZ) and Keith Ellison (D-MN), subscribe to the notion that government is both the engine and the drive train of our nation’s economy.

But if Essential Liberty and Rule of Law as enshrined in our Constitution are to survive, then free enterprise must be their economic engine. At present, however, that engine is attempting to pull an ever more bloated government trailer – a trailer so overloaded as to bring the economy to a dead stop.

Obama’s government programs will amass a $1.3 trillion deficit in fiscal year 2011 alone, some $400 billion more than the paltry $917 billion in savings to which Congress agreed over the next decade under the recent budget deal and corresponding debt-ceiling increase.

This oppressive bloat – and our elected leaders’ utterly inadequate response to it – will serve as fodder for much of the political debate ahead of the 2012 election. Indeed, the future of Liberty depends on the successful defeat of enough congressional leftists to provide strong conservative majorities in both the House and Senate. Moreover, Liberty hangs in the balance of the upcoming presidential election. While conservatives recaptured the House of Representatives in 2010, the first effective step to restrain Obama’s agenda, only a conservative president can begin to undo the damage done to our nation by the Obama regime.

However, do we still have the luxury of political solutions, via elections, to salvage what is left of our Republic? Is the ballot box still a viable method to restore constitutional integrity?

As John Adams once warned, we must be vigilantly on guard against all contagions that would “infect the purity of our free, fair, virtuous, and independent elections.”

These contagions, these obstacles, are as follows, roughly in order of threat magnitude: an ignorant electorate; candidates who are unable to articulate the difference between Rule of Law and rule of men; institutionalized dependency on the state, including the fact that 40 percent of Americans pay no federal income tax; forced redistribution of wealth; comfort, complacency and indifference; Leftmedia dezinformatsia; opposition by the leftist elite; and, finally, the conferring of legal status upon illegal immigrants in order to fortify Democrat voter constituencies illegitimately.

The most significant obstacle to restoring liberty by way of the electoral process is the fact that so many Americans know so little about civics or civic responsibility. When it comes to getting government right, ignorance is not bliss.

It follows, then, that there is a dearth of qualified candidates who are able to articulate the difference between Rule of Law and rule of men, who instead get lost in the high weeds of lesser political issues.

A majority of Americans are beneficiaries of some combination of thousands of government schemes to redistribute wealth. The resulting institutionalized dependency on the state is insidious, as it results in reliable votes for whichever party (read: the Democrat Party) can take the most from one group and redistribute it to another. It’s no wonder that the most recent Index of Dependence on Government (2010) reports the greatest single-year percentage rise in dependence since 1976.

As Senator Tom Coburn (R-OK) recently noted, Obama’s “intent is to create dependency because it worked so well for him.”

Additionally, 40 percent of Americans pay no federal income taxes. This huge voting bloc thus has no (apparent) stake in our nation’s fiscal health, and its voters are thereby motivated to use their ballots to keep the government largess spewing.

As 19th-century political economist Frederic Bastiat noted, “Government is the great fiction through which everybody endeavors to live at the expense of everybody else.”

The forced redistribution of wealth pushed the Cost of Government Day to 12 August this year, which means that the average American tax payer must now work 224 days to fund all taxes, and hidden regulatory taxes, imposed by the central government. That date is 27 days later than in 2008, and it now consumes more than 60 percent of national earned income. There are endless regulatory costs on the horizon, such as Obama’s new fuel economy standards which according to a study conducted by the Center for Automotive Research, will increase the average retail price of motor vehicles more than $11,000.

As government takes more, individuals have less to live their lives and to support Liberty advocacy organizations like The Patriot Post.

Of course, comfort, complacency and indifference, particularly among wealthy “Republicans” who contribute little to sustain our legacy of Liberty for our posterity, undermine the potential for sustaining Liberty by way of the ballot box.

In response to such indifference, Samuel Adams advised, “If ye love wealth better than liberty, the tranquility of servitude than the animating contest of freedom, go from us in peace. May your chains sit lightly upon you, and may posterity forget that ye were our countrymen!”

While these are certainly formidable obstacles to the rejection of socialism and successful restoration of constitutional integrity, they are not insurmountable. Still, when generations of Americans have been inculcated with the belief that they are entitled to so much from the state, it may take a generation or more to re-educate them, and to stave off the violence that often erupts when the state fails to meet their expectations as witnessed recently in Greece and England.

The question remains: Are we irrevocably locked into the Cycle of Democracy? Recall that this evolves from bondage to spiritual faith; spiritual faith to great courage; courage to Liberty (Rule of Law); Liberty to abundance; abundance to complacency; complacency to apathy; apathy to dependence; and from dependence back into bondage (rule of men). As for the gap between dependence and bondage, philosopher and author of Atlas Shrugged, Ayn Rand, wrote, “The difference between a welfare state and a totalitarian state is a matter of time.”

At the close of the first American Revolution, George Washington wrote, “No country upon earth ever had it more in its power to attain these blessings [of Liberty] than United America. Wondrously strange, then, and much to be regretted indeed would it be, were we to neglect the means and to depart from the road which Providence has pointed us to so plainly; I cannot believe it will ever come to pass.”

We have already veered from that road. Is there time to use the ballot box to attain a new dawn for Liberty, or are we destined to dependence and bondage, which will require another renewal of faith and courage?