The Supreme Court and the Future of Liberty

The most critical case since FDR

“There are more instances of the abridgment of the freedom of the people by gradual and silent encroachments of those in power than by violent and sudden usurpations.” –James Madison 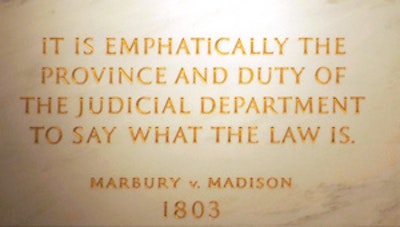 The Supreme Court of the United States (SCOTUS) has convened for its 2011/12 term, and one case before the court will determine whether the central government can nationalize another one-sixth of the American economy. Call it The American people v. ObamaCare.

For the record, that would be one-sixth of what remains of free enterprise after all the nationalization already undertaken by Barack Hussein Obama, ostensibly to “save the economy.” If Obama and his socialist cadres continue to undermine free enterprise at the current pace, his goal of “fundamentally transforming the United States of America” into a socialist democracy will be assured, regardless of the victors in the next election cycle.

Indeed, the rapidly growing ranks of Americans already dependent upon government subsidies (approximately 32-35 percent), many of whom are content to vote for the redistribution of others’ incomes rather than work for their own, greatly influences national elections. That dependent electorate, combined with the government’s control over tens of millions of other American incomes by way of nationalization and regulation, increases the number of its dependents to about 40 percent, which poses a perilous threat to Liberty. Think about it this way: Forty percent of Americans are, to varying degrees, fiscally addicted to the public treasury. Is it any wonder that American Liberty is under siege, and that its future of the Republic is in question?

Responding to a complaint by 26 states, the U.S. 11th Circuit Court of Appeals struck down the “individual mandate” in so-called “Patient Protection and Affordable Care Act” (ObamaCare). The mandate itself is an unprecedented statist requirement that every American buy an insurance product or service and have proof of coverage. As such, it is a gateway measure for governmental authority to define not only the type of coverage but also the degree.

If SCOTUS fails to uphold the Circuit Court’s ruling, ObamaCare will be well on its way to increasing the number of Americans whose incomes are directly regulated by the central government to well over 50 percent. The implications for “free and fair” elections are ominous, given that a majority of Americans would then have an economic interest in electing only those who promise to continue doling out the “free” goodies.

As you recall, when asked about the constitutionality of ObamaCare legislation prior to its shamefully rigged House and Senate passage, Democrat leadership simply scoffed and rebutted, “Nobody questions that.” Despite the unmitigated arrogance of those on the Left, who treat our Constitution as a doormat, the Supreme Court will have to answer that question.

That answer will depend on whether the number of justices who abide by their oaths “to support and defend” the United States Constitution and Rule of Law as enshrined within it outnumber those justices who have utterly abandoned their oaths in favor of the rule of men under the so-called “living constitution.” Put simply, the Supreme Court will be charged with upholding the supreme contract between “We, the People” and our government.

The Obama administration is trying to fast-track this critical decision. How is SCOTUS likely to rule? Here is the current High Court breakdown. 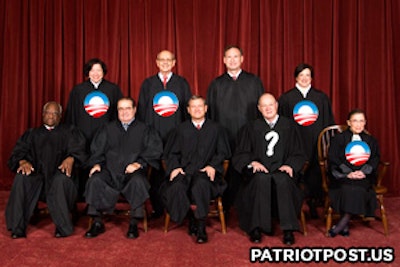 On the fence would be the ninth justice, Anthony McLeod Kennedy (age 75), a heretofore unreliable justice appointed by Ronald Reagan in 1988, in the wake of the Democrats’ vicious and unprecedented assault on Reagan’s original appointee, Robert Bork, one of our nation’s pre-eminent jurists.

My prediction in the ObamaCare case is a 5-4 split, with Kennedy voting with the majority – which majority, I cannot predict. As Leftists in both the legislative and executive branches have entirely abandoned their obligation to uphold our Constitution, fending off a substantial threat to Liberty now rests in the hands of one loyalty-confused Supreme Court justice.

If the Court upholds the 11th Circuit’s decision, it will be the most significant strike against national legislation since rulings against Franklin Roosevelt’s socialist regime in the 1930s.

Florida Attorney General Pam Bondi correctly concludes that affirming the 11th Circuit’s decision would be a major step to “define the boundaries of Congress’ power” and “defend Americans’ rights and freedoms.”

However, if the Supremes do not uphold the 11th Circuit’s decision, batten down the hatches. Until which time ObamaCare can be fully repealed by congressional majorities which do abide by their oaths, House Republicans can and must use the authentic powers granted by our Constitution to de-fund ObamaCare and block enactment of any further provisions. Of course, that will require leadership…

In closing, may I remind you that the next president will have the opportunity to nominate one or more Supreme Court Justices?

One Last March for Life?

“Here comes the orator! With his flood of words, and his drop of reason.” —Benjamin Franklin (1735)