“It is the duty of all Nations to acknowledge the providence of Almighty God, to obey his will, to be grateful for his benefits, and humbly to implore his protection and favors.” –George Washington 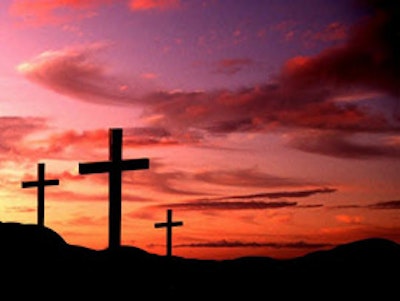 The Resurrection of Jesus Christ, appropriately celebrated in our country each year as the dormant winter season yields to new spring growth, is the foundation of our belief that life can arise miraculously from the hard darkness of apparent death, thus bringing great hope to us even in the bleakest of winters.

I live in an area of our great country where the seasons are well defined, but spring is my favorite. As March closes, I am treated to the miraculous emergence of new life from the winter cold, and I marvel at God’s expression through the splendid colors on branch and ground where the restoration of life had been awaiting its cue.

But the hope that we Christians have is a hope greater than merely the changing of seasons.

The Resurrection is the central event and tenet that distinguishes Christianity from all other faiths. While others add human works into the equation, only God Himself, through His sacrifice on the cross, could ransom us from our sin-slavery, fulfilling the requirements of the Law. Only God Himself could then rise from the dead, returning to deliver unto His followers the very freedom He had paid with His life to secure.

Jesus told His disciples, “If you abide in My word, you are My disciples indeed. And you shall know the truth, and the truth shall make you free” (John 8:31-32). Those last words (in Latin, Veritas vos Liberabit) have been The Patriot’s motto since our inception, and we continue to advocate truth and liberty.

Take, for example, Davenport, Iowa, this week, where City Administrator Craig Malin removed Good Friday, the most somber of Christian holidays, from the municipal calendar. He did so without even bringing the issue before the city council, thus unilaterally renaming the day “Spring Holiday.”

Malin claims he was just following the recommendation of the Davenport Civil Rights Commission. Tim Hart, the commission’s chairman, declared, predictably, “Our Constitution calls for separation of church and state. Davenport touts itself as a diverse city and given all the different types of religious and ethnic backgrounds we represent, we suggested the change.”

Memo to Tim: There is no “Wall of Separation” in our Constitution. The truth shall make you free.

“The city council didn’t know anything about the change. We were blindsided and now we’ve got to clean this mess up,” said city council alderman Bill Edmond. “How do you tell people the city renamed a 2,000-year-old holiday?”

Of course, we’ve already been through this exercise in political correctness with Christmahanakwamadan, so why not add Good Friday?

In the end, though, it appears that common sense will prevail in Davenport and Good Friday will yet be restored to its calendar.

Truth and liberty are under vicious assault in other forms as well, often under the guise of compassionate care or “social justice.” When it suits their purposes, leftists will even sweep aside their concerns for “separation of church and state” so that they themselves may evoke religion. For example, they often cite the words of Jesus when it comes to “caring for the poor,” hence, in their minds, their mandate for the federal government takeover of health care.

On the contrary, Jesus never once spoke about the need for the government to address anything. He was (and is) solely concerned with each individual’s heart and being. And it is His gift of life and liberty that we embrace when we fight the tyranny of leftist “compassion.”

As Thomas Jefferson wrote, “The God who gave us life, gave us liberty at the same time; the hand of force may destroy, but cannot disjoin them.”

We know well that the world is a harsh place. As we survey its poverty – both fiscal and moral – or the damage and suffering caused by natural disasters such as the earthquakes in Haiti and Chile, or the man-caused disasters (i.e., “solutions”) leftists inflict upon us, we’re reminded of the brokenness of this world. Indeed, Christ didn’t die on the cross for a world that didn’t need Him. He died for one that did and does.

Ironically, perhaps, that’s where Easter brings the greatest hope. Christ conquered death when He rose from the grave that Sunday morning so long ago so that He can return to right all wrongs. In Revelation 21:5, Jesus said, “Behold, I am making all things new.”

Our ultimate hope is not in political leaders (though we must always strive to elect upright ones) or in political solutions (though we must always fight for the right principles), but in the renewal that will one day come, as promised by our true Savior. Our hope will not wax or wane with each election, because this world is not all that there is. For that we are truly thankful to our Creator, and we look forward to the day when all things are made new.

“Now after the Sabbath, toward the dawn of the first day of the week, Mary Magdalene and the other Mary went to see the tomb. And behold, there was a great earthquake, for an angel of the Lord descended from heaven and came and rolled back the stone and sat on it. His appearance was like lightning, and his clothing white as snow. And for fear of him the guards trembled and became like dead men. But the angel said to the women, ‘Do not be afraid, for I know that you seek Jesus who was crucified. He is not here, for he has risen, as he said. Come, see the place where he lay. Then go quickly and tell his disciples that he has risen from the dead, and behold, he is going before you to Galilee; there you will see him. See, I have told you.’ So they departed quickly from the tomb with fear and great joy, and ran to tell his disciples. And behold, Jesus met them and said, ‘Greetings!’ And they came up and took hold of his feet and worshiped him.” –Matthew 28:1-9

Publisher’s Note: In observance of Good Friday and preparation for Resurrection Sunday, The Patriot’s editors and staff take leave from the rigors of news and policy analysis and the demands of our editorial deadlines in order to focus on an eternal message, the Christian message. To our Patriot readers of faiths other than Christianity, we hope that this edition serves to deepen your understanding of our faith – and the faith of so many of our Founders. (As always, permission to forward or reprint is granted.) From your brothers and sisters at The Patriot Post, we wish you a blessed Easter in celebration of our Savior.

The Threat From Biden’s Deadly Surrender and Retreat From Afghanistan