“Vladimir Putin doesn’t want me to be President.”

This is a bookend column.

I began the week with analysis about Vladimir Putin doing exactly what he told Joe Biden and the rest of the world he was going to do, invade Ukraine — the biggest military invasion since Adolf Hitler swallowed Poland in 1939. And Putin will base his response to the hardships caused by the West’s response – piling on layers of additional sanctions and the provision of arms to Ukraine – on the Hitler model: A rallying call for nationalism.

And I started that analysis with an assertion that I am going to repeat here, because it can’t be repeated often enough: Anyone who believes that Russian dictator and former KGB thug Putin would invade Ukraine if Donald Trump was still president is pathologically delusional. Putin’s “minor incursion,” as Biden framed it ahead of the invasion, is the direct consequence of an inept, non compos mentis commander-in-chief in the White House — who was a moron long before being elected. Power does not tolerate a vacuum, nor an inept and vacuous appeaser, and consequently, weakness invites aggression.

For the record, remember when Obama and Biden empowered Putin’s “Russian Spring” invasion of Ukraine the fist time in 2014, when he seized control of Crimea. How inconsiderate of Putin after then-Secretary of State Hillary Clinton gave his foreign minister a “reset button.”

When Trump was in office, the coward Putin cowered.

Also the record, remember when candidate Biden asserted: “Vladimir Putin doesn’t want me to be President. … If you’re wondering why — it’s because I’m the only person in this field who’s ever gone toe-to-toe with him.” Remember when he declared that if Trump was reelected, “Imagine what he can do…imagine what can happen to Ukraine.”

Well, how did that turn out? Just imagine…

Fact is, the most dangerous threat to U.S. national security has been and remains Joe Biden. Everyone who voted for Biden, voted for this invasion, voted for the terror that now besieges millions of families and children, and voted for the bloodshed to come.

Obviously, none of Biden’s toothless threats deterred the invasion, nor will they deter the occupation.

Recall last week, the day before Putin’s invasion, Biden’s Ukrainian “border czar” Kamala Harris declared, “The purpose of the sanctions has always been and continues to be deterrence.”

In his dangerously dullard remarks this week announcing new sanctions against Russia, Biden insisted, “No one expected the sanctions to prevent anything from happening.”

Let that comment sink in. Everything Biden has blustered for the last two months is that sanctions would deter Putin from invading Ukraine. How did that work out?

Predictably, thus far Biden has refused to implement the one sanction that might get Putin’s attention — blocking Russia’s access to the SWIFT banking system. But getting Europe behind that action will be difficult given that NATO nations now depend on Russia and Ukraine for 40% of their natural gas supplies.

Oh, and there is this regarding Russian oil… Biden could also, with a stroke of his pen, restore the Keystone XL pipeline and fracking projects.

For the record, after Biden killed Keystone XL, thus ending our national status as a net energy producer, there is this bit of troubling data from National Review’s analysis: “Throughout 2021, the U.S. has imported 12 million to 26 million barrels of crude oil and petroleum products per month from Russia — that same country we keep enacting new sanctions on, in an effort to deter Vladimir Putin’s territorial ambitions. … Last spring, imports of Russian oil hit the highest level in a decade; in August, Russia became the second-highest exporter of oil to the United States.”

The boldest thing Biden can do to really hit Putin’s purse is to conscript one of those Western alliances he claims he is so adept at forming, and sanction Russian oil. As the Wall Street Journal editorial board notes, “A mere U.S. ban on Russian oil imports is a distraction from the real issue.”

That being said, Ukraine’s president, Volodymyr Zelensky, has declared that global support of his country, including sanctions, came too late.

And, despite all of Biden’s bluster about sanctions against Russia’s corrupt oligarchs, the wealthiest of them is Vladimir Putin himself, who has stollen what is estimated to be somewhere between $10 and $200 billion from the Russian people.

And on the subject of corruption, just a reminder that, despite the fact we want Ukraine to repel the Russians, the Ukrainian government is corrupt from top to bottom.

Fact is, Biden has enabled a Russia/China one-two sucker punch against U.S. and world energy supplies.

But hey, at least the temperature of the planet won’t go up some fraction of a degree over some expanse of time, unless, of course, Putin launches some nukes. Apparently, “climate change” is not the most pressing Department of Defense priority, but that has not stopped Biden’s “climate czar” John Kerry from complaining that the Russia-Ukraine war will distract from the Left’s socialist “climate change” agenda. Of course, a global “nuclear winter” could resolve that problem.

Putin objective is the accumulation of power, and he knows well the amount of daylight between U.S/NATO rhetoric and the reality of his options. 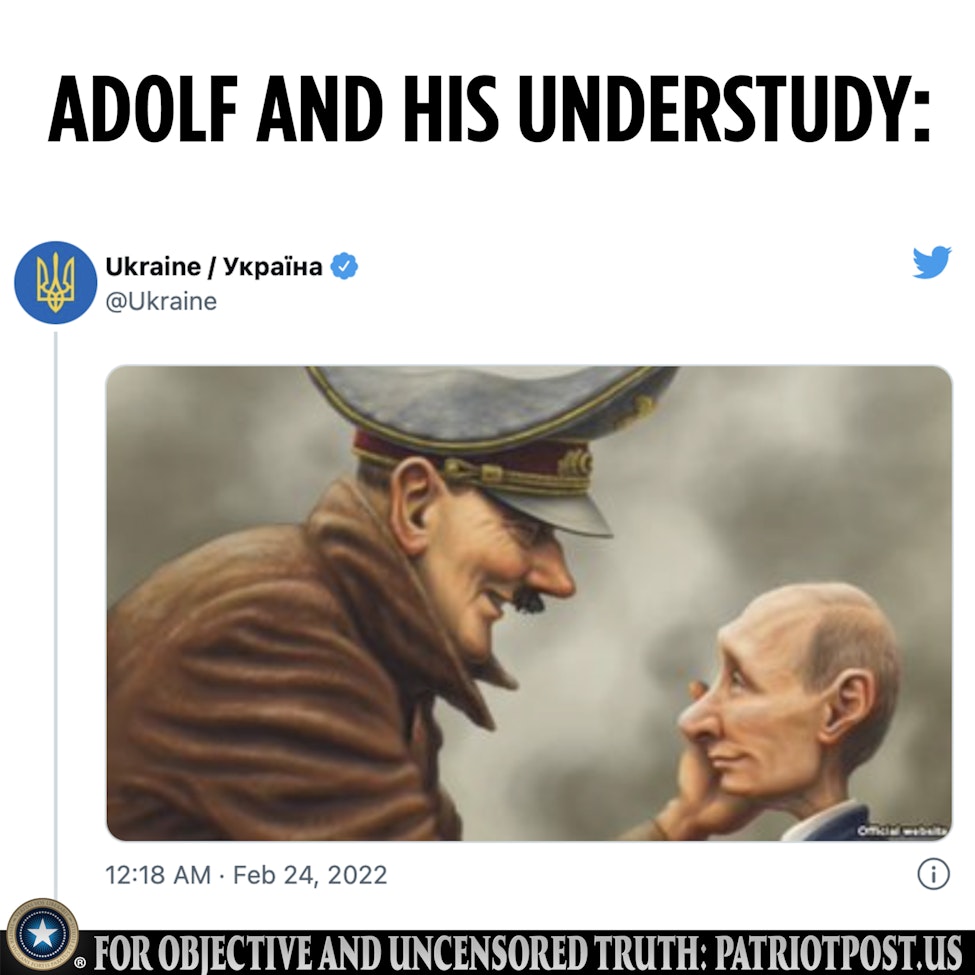 How long can Ukraine survive before Putin’s next puppet president will be comfortably settled into Kyiv? That is not clear given the considerable defensive capabilities demonstrated by Ukrainian forces. Anyone who has served with Ukrainian forces can attest to the fact that what they lack in training, they make up in tenacity.

There are now countless examples of Ukrainian regulars standing against insurmountable odds and overwhelming enemy forces.

One such example will become the rallying cry for all Ukrainians.

Ukrainian border guards on the small outpost of Snake Island were ordered by Putin’s Black Sea fleet flagship Moskva (Moscow) to surrender. Their response resulted in a modern version of defiance like that made famous during the Texas Revolution in 1836 when Americans refused to give up Alamo Mission to Santa Anna’s overwhelming Mexican forces. Their deaths were immortalized in a rallying shout, “Remember the Alamo.”

But the harsh reality is that, thus far, Putin has only deployed a fraction of his forces arrayed along Ukraine’s borders. U.S. intelligence estimates indicate that if Putin activated the bulk of those border forces, Kyiv would fall within 48 hours, and half of Ukraine’s forces would perish over the next 10 days – if taking the whole of Ukraine is his objective. If that comes, we will then see what an actual “insurrection” looks like.

Meanwhile, our feckless leader insists: “I didn’t underestimate him. … He has much larger ambitions than Ukraine. He wants to in fact reestablish the former Soviet Union. That’s what this is about.”

Thanks, Joe. That is precisely how we outlined Putin’s objective almost three months ago in “Battleground Ukraine: Putin the Tyrant v. Biden the Appeaser.”

Ominously, recall that in his comments to justify the invasion, Putin made references to Poland and Lithuania, both of which are NATO Article 5 countries. An attack on either would constitute an attack on all of NATO, triggering U.S. military involvement.

And, as we predicted, Red China has stepped up its military probes of Taiwan airspace. Giving a stupid answer to an equally stupid question yesterday, when Biden was asked if Xi Jinping was helping to deter Putin, Biden responded, “I’m not prepared to comment on that.”

Biden’s spinners are working furiously ahead of his State of the Union Address next week to weave some believable deflection of how Biden’s ineptitude invited this invasion. You can read a preview of his lies and obfuscations here.

Again, let me be clear: It can’t be stated strongly or often enough that, as was the case with our Afghan allies’ bloodshed in the wake of Biden’s surrender and retreat from Afghanistan, every drop of Ukrainian bloodshed is the direct result of Biden’s abject ineptitude. Brace yourself, America.

As I have written previously, the tidiest way to terminate Putin’s murderous Ukraine invasion – and his tyrannical dictatorship in Russia, is for a member of his security or military detail to put a bullet in his head. The more war and sanction-related civil unrest that emerges in Russia’s major cities, the more likely a proud and heroic individual may impose that “regime change” – and that individual would qualify for a “Hero of Russia” medal. As Sen. Lindsey Graham (R-SC) put it more plainly: “Is there a Brutus in Russia? Is there a more successful Colonel Stauffenberg in the Russian military? The only way this ends is for somebody in Russia to take this guy out. You would be doing your country — and the world — a great service.”

Footnote: In the fog of his mindless and unmitigated arrogance, at the end of this first week of the most devastating invasion since World War II, Joe Biden slipped in the announcement of his SCOTUS nominee.