Abandon traditional values in the face of pressure from the Rainbow Mafia? 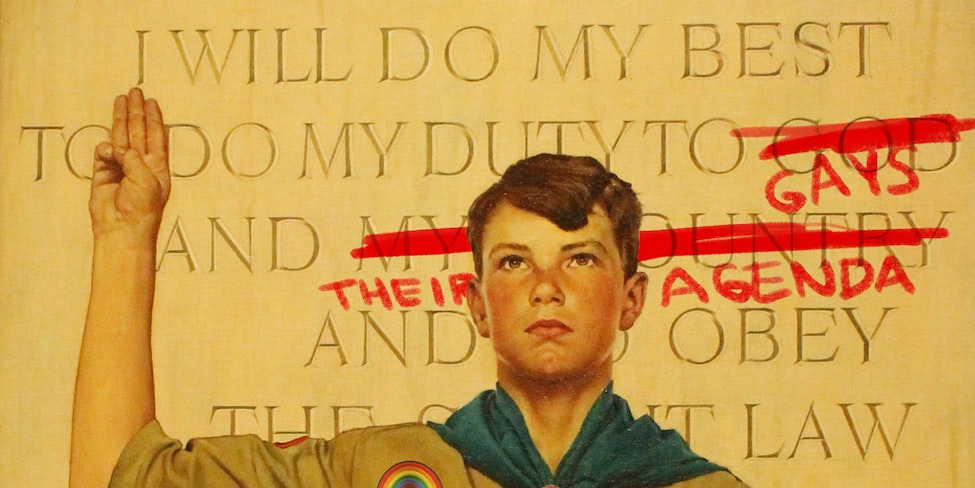 (Update: In July of 2015, the BSA National Board voted to allow homosexual leaders of Boy Scout Troops.)

In the same week that the national board fo the Boy Scouts of American banned squirt gun competitions, Robert Gates, president of the BSA, announced at its annual national meeting, that the time has come to end the ban on homosexual adult leaders in the BSA.

Citing the wave of cultural changes taking place under threat from homosexual activists, including same-sex marriage edicts in the courts and anti-discrimination laws in several states, Gates insisted, “The status quo in our movement’s membership standards cannot be sustained. … The one thing we cannot do is put our heads in the sand and pretend this challenge will go away or abate. Quite the opposite is happening.”

Translation: Abandon traditional values in the face of pressure from the Rainbow Mafia.

Far from putting “our heads in the sand,” however, defending both traditional Judeo-Christian values and religious liberty itself is called standing on principle.

Gates cautioned that if the organization doesn’t change on its own the homosexual lobby and its allies in the courts are likely to force the issue. “If we wait for the courts to act,” he warned, “we could end up with a broad ruling that could forbid any kind of membership standard,” including belief in duty to God and specifically serving the needs of boys. So he argued for change, leaving it up to individual councils and chartering organizations … for now. However, such a change would basically pass this buck to the local councils and chartering organizations forcing them to deal with the protests and legal challenges.

Gates, a former secretary of defense and CIA director, has a track record of knuckling under to homosexual activists. He was at the helm of the Pentagon for the repeal of “Don’t Ask, Don’t Tell” in 2010, justifying his actions at the time as an end to discrimination rather than calling the change what it was: an attempt by gays and lesbians to remake yet another institution to suit the needs of a small but vocal fraction of the population. (On that note, homosexuals and their allies have managed to erroneously convince more than half of Americans that gays make up at least 20% of the population. The true number is more like 3%, but it helps the agenda if it appears there are far more of them.)

When Gates took the job as president of the BSA in 2014, he said he had no intention of allowing homosexual scout leaders. The BSA was already reeling from a 2013 decision that summarily dropped the ban on openly homosexual youths. That vote passed by 60% of the 1,400 delegates in attendance, but that delegation was stacked with Mormon representatives, and the outcome is hardly a representative cross-section of the BSA’s national membership.

Scout membership nationally is already down more than 10% since the last encroachment of gay activists — but the prospect of homosexual leaders overseeing boys will most assuredly lead to a much more significant decline in both funding and membership.

Gates is correct that the homosexual lobby isn’t done reshaping the 103-year-old organization to suit its agenda. Scouts for Equality and the Human (read “Homosexual”) Rights Campaign issued statements after Gates’ speech insisting they were heartened by his words, but wanted to see more action. HRC President Chad Griffin said, “It’s time for BSA leaders to show true leadership and embrace a full national policy of inclusion that does not discriminate against anyone because of who they are.” Unless of course you want to discriminate against someone for their religious beliefs — that’s perfectly acceptable to HRC and other members of the homosexual lobby.

“We must deal with the world as it is, not as we might wish it to be,” Gates declared. Well, the world as it is right now is being reshaped by an aggressive minority who want little more than the power to reshape the culture and its institutions in its own image.

And never mind that the “tolerant” thing to do would be to live and let live. Set up another scouting organization to advance and promote leftist values, and leave the Boy Scouts alone. Yet proponents of the homosexual agenda have convinced the courts and the Leftmedia to go along with their plan to dismantle every institution in this country for the sake of accommodating, promoting and advancing their own lifestyle. Submit to homosexual leaders, don’t oppose same-sex marriage, bake the cake — whatever the demand, you will comply. Or else. So-called tolerance is a one-way street.

Fact is, Gates most assuredly knows his remarks are about “softening the beaches before the invasion.” And his is really passing the buck to local councils to provide his board politically correct cover. The national BSA board is occupied mostly by a star chamber of wealthy elitist corporate types, who have NO connection with the grassroots constituents their organization serves – but they are good fundraisers. (Stacking boards with wealthy fundraisers is a Faustian bargain.) So Gates is going to surrender rather than fight – because to fight would mean those BSA corporate execs might find their companies being boycotted by homosexual activists, because they held the BSA line against infusion of the homosexual agenda into the nation’s largest organization serving boys.

Gates declaration that his motivation to surrender is to avoid a court case is a lie masquerading as a rationale. If Gates was really worried about lawsuits in connection with adult homosexuals who have access to young boys, he should consider the enormous legal judgements against other national organization where adult homosexuals have predated on young boys – the Catholic Church comes to mind.

The difference is that the BSA’s leadership is inviting the wolves to take care of the sheep, where as the Catholic Church attempted to cover up the fact that a few wolves ended up with the sheep. The BSA better increase their legal defense fold 10,000/fold. We do not suggest that all homosexuals are predisposed toward predatory behavior with minors, but clearly some are. And increasing the exposure increases the risk.

The BSA should FIGHT this battle to the end, not surrender. If not, at least Gates should tell the truth about the national board’s motivation for surrender.

Weak Joe Got Rolled on the Prisoner Swap

An ‘End Date’ for ‘Whiteness’?

“How difficult it has been for mankind, in all ages and countries, to preserve their dearest rights and best privileges, impelled as it were by an irresistible fate of despotism.” —James Monroe (1788)