The Patriot Post is funded 100% by its readers, avoiding the influence advertisers and special interest groups impose on other publications. Help us stay front and center in the fight for Liberty and support the 2021 Year-End Campaign. 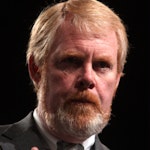 Founder and president of the Media Research Center, Mr. Bozell runs the largest media watchdog organization in America. Established in 1987, the MRC has made "media bias" a household term, tracking it daily and printing the compiled evidence biweekly in its well-known Notable Quotables, as well as the daily CyberAlert intelligence report on the Internet. His most recent book, Whitewash: What the Media Won't Tell You About Hillary Clinton, but Conservatives Will, was released in November 2007. His previous book, Weapons of Mass Distortion: The Coming Meltdown of the Liberal Media, was released in July 2004.

In 1998, Mr. Bozell launched , an online news service with an emphasis on investigative journalism. CNSNews.com has become a major Internet news source with a full staff of journalists in its Washington, D.C. metro bureau, with other correspondents around the world. In October 2006, Mr. Bozell founded the Culture and Media Institute (CMI), whose mission is to thwart the efforts of the liberal media to subvert America's culture, character, traditional moral values and religious liberty. CMI complements the MRC's Business and Media Institute (BMI), founded in 1992 to bring balance to economic reporting and to promote fair portrayal of the business community in the media.

Mr. Bozell has also launched a number of other websites under the MRC umbrella including www.timeswatch.org, www.mrcaction.org and www.Newsbusters.org, a "blog" site that became one of the top 15 blog sites in America within two months of its launch in 2005.

Founder and former president of the Parents Television Council, Mr. Bozell established the largest Hollywood-based organization dedicated to restoring responsibility to the entertainment industry. The PTC at http://www.parentstv.org features the "Family Guide to Prime Time Television," which aids parents in making informed viewing decisions for their children. PTC conducted the largest national newspaper ad campaign in history with late Honorary Chairman Steve Allen, and has mobilized almost one million parents and other concerned members behind its efforts.

Mr. Bozell is a nationally syndicated columnist whose work appears in publications such as Wall Street Journal, The Washington Post, The Washington Times, The New York Post, The Los Angeles Times, Investors Business Daily and National Review. He is regularly invited to provide media expertise on news programs by all the major networks and cable affiliates. He is frequently invited to appear on Fox News Channel shows such as Fox & Friends and The O'Reilly Factor, and other appearances include NBC's Today show, CNN's Inside Politics and Larry King Live, ABC's Good Morning America, C-SPAN, CBN and Entertainment Tonight. He has appeared as a guest and guest host on hundreds of radio shows, from local talk shows to ABC Radio, NPR's Morning Edition, the Michael Reagan Show and the Rush Limbaugh Show.

Named the 1998 Pew Memorial Lecturer by Grove City College, Mr. Bozell is a frequent speaking guest on school campuses and for civic and political organizations around the country.

Mr. Bozell received his B.A. in History from the University of Dallas, where he was named the 1998 Alumnus of the Year. He is married, with five children and two grandchildren.

“An honest man can feel no pleasure in the exercise of power over his fellow citizens.” —Thomas Jefferson (1813)