You Make a Difference! Our mission and operations are funded entirely by Patriots like you! Please support the 2021 Year-End Campaign now. 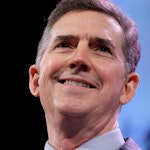 Becoming president of The Heritage Foundation is “like coming home,” says Jim DeMint, who rose from modest South Carolina roots and a career in marketing to build and lead a resurgent conservative caucus in the U.S. Senate. Heritage’s public policy research, DeMint says, informed him as a citizen and inspired his entry into politics and government.

On April 4, 2013, DeMint succeeded Edwin J. Feulner as president of the leading think tank. After stepping down from the Senate seat to which South Carolinians twice elected him, DeMint functioned as president-elect of Heritage in a three-month transition. Feulner, president since 1977, was a founding trustee in 1974.

“I’m humbled to follow in the footsteps of Ed Feulner, who built the most important conservative institution in the nation,” DeMint said during the transition. “He has been a friend and mentor for years and I am honored to carry on his legacy of fighting for freedom.

“Heritage will remain, first and foremost, a research institute dedicated to impeccable research and data-driven policy analysis,” DeMint added. “Our policy recommendations carry weight because they are informed by that research and grounded in the principles laid out by the Founding Fathers -- principles that have been proven sound time and time again during this great American Experiment.”

DeMint has said that a primary goal for Heritage is to help the conservative movement understand how Americans from all walks of life perceive public policy issues -- and to better communicate conservative ideas and solutions.

DeMint was born James Warren DeMint on Sept. 2, 1951, in Greenville, S.C. “Jim” and three siblings were raised by a single mother who taught him the value of hard work and perseverance. He attended public schools in Greenville, graduating from Wade Hampton High School. He married his high school sweetheart, Debbie Henderson, in 1973.

That same year, he received a bachelor of science degree in communications from the University of Tennessee. He also holds a master’s degree in business administration from Clemson University.

In 1983, after working 10 years in the research, advertising and marketing business, he started the DeMint Group, a Greenville-based marketing research and strategic planning business. In addition to his family, small business and local Presbyterian church, he immersed himself in Greenville civic life – volunteering and leading numerous charitable organizations.

He ran the DeMint Group until 1998, when he was elected as a Republican to the first of three terms in the U.S. House of Representatives. DeMint kept his promise to serve only three two-year terms in the House. His reputation as one of Washington’s most principled conservative leaders grew after his election to the U.S. Senate in 2004, the 55th to serve from South Carolina. He continued to advocate limited government, individual liberty, a strong national defense and traditional values – all core tenets of America’s founding and Heritage’s public policy mission.

Over the years, DeMint collaborated with Heritage on reforms to entitlements, health care, education and immigration, and on efforts, such as Heritage’s Index of Dependence on Government, to reverse Americans’ growing reliance on taxpayer-funded programs. He drew national attention for working to end the corrupt system of congressional earmarks, stopping the misguided 2007 amnesty bill, arguing for comprehensive missile defense and opposing ill-advised treaties, such as the UN’s Law of the Sea Treaty, which would harm American sovereignty.

He is the author of the books “Now or Never: Saving America from Economic Collapse” (Center Street, 2012); “The Great American Awakening: Two Years that Changed America, Washington and Me” (B&H, 2011); and “Saving Freedom: We Can Stop America's Slide into Socialism” (Fidelis, 2009). His first book, with co-author J. David Woodard, is “Why We Whisper: Restoring Our Right to Say It’s Wrong” (Rowman & Littlefield, 2007). His latest book, “Falling in Love with America Again” (Center Street, 2014) debuted at #1 on The Washington Post bestseller list.

DeMint and his wife, Debbie, have four children who now are grown and married. They’ve taken a shine to being grandparents.