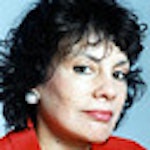 Columnist, author and social observer Suzanne Fields, whose commentary probes the way we live, is one of the liveliest and most provocative op-ed voices in America.

Fields began writing a twice-weekly column for The Washington Times in 1984 and has been nationally syndicated since 1988. She is the author of Like Father, Like Daughter: How Father Shapes the Woman His Daughter Becomes (Little Brown, 1983). How the Cookie Crumbles, a collection of her columns, was published by The Washington Times in 1996. She was a mental health columnist for Vogue magazine and editor of Innovations, a magazine for mental health professionals, psychiatrists, psychologists and social workers.

She was a regular commentator for the CNN show CNN & Co. and has appeared on Fox Morning News, Nightline, The NewsHour with Jim Lehrer, Larry King Live, Crossfire, Oprah, The Today Show, Good Morning America and the Canadian Broadcasting Company's Prime Time.