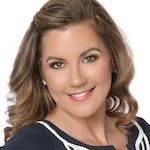 Adriana Cohen is a syndicated columnist, national TV commentator, Boston Herald columnist and talk show host. Adriana has written hundreds of columns on diverse topics of interest that are often the front-page splash in the Boston Herald and picked up by major media. Adriana also is a regular fixture on national television.

In February 2017, the White House invited Adriana to join the daily press briefing.

Prior to joining the Boston Herald, Adriana was a lead GOP political analyst for CBS Radio, covering the 2012 presidential and vice presidential debates and election night and appearing for the "Talk the Vote" series. She also covered the U.S. Senate special election, New York City mayoral and comptroller political races, and many other diverse topics of interest on-air.

A lifelong philanthropist supporting innumerable charities across the country, Adriana also volunteers at a homeless shelter. She lives in Massachusetts with her husband and children.