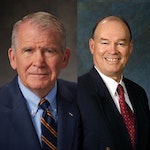 Lt. Col. Oliver North is a combat-decorated U.S. Marine, No. 1 bestselling author, founder of a small business and holder of three U.S. patents. For 17 years, he was a syndicated columnist and host of “War Stories” on FOX News Channel. In May 2018, he retired from FOX News to serve as the 66th president of the National Rifle Association of America. He is now the founding CEO of Fidelis Publishing LLC and Fidelis Media LLC.

North was born in San Antonio in 1943, graduated from the U.S. Naval Academy in 1968 and served 22 years as a U.S. Marine. His awards for service in combat include the Silver Star, the Bronze Star for valor and two Purple Hearts for wounds in action.

From 1983-86, he served as the counter-terrorism coordinator on the National Security Council staff. He helped plan the rescue of U.S. students on Grenada, the liberation of American hostages, the capture of the Achille Lauro hijackers and the raids on Moammar Gadhafi's terror bases — after which he was targeted for assassination by Abu Nidal’s Islamic jihad. President Ronald Reagan described North as “an American hero.”

He has authored 18 bestselling books and is co-founder of Freedom Alliance, an organization serving wounded U.S. military personnel and their families. He is widely acclaimed for award-winning FOX News coverage of more than 60 U.S. units in combat and his Freedom Alliance “Hero College Scholarships” for children of service members killed or permanently disabled in the line of duty. Yet, North says his greatest achievement is being “the God-fearing husband of one, father of four and grandfather of 18.”

Lt. Col. North and his wife, Betsy, live in Virginia. In November 2018, they celebrated their 50th anniversary.

His newest book, "Veterans’ Lament," and his library of “Real American Heroes” videos are available at olivernorth.com.

Dr. David Goetsch is a Marine veteran and bestselling author of 76 books. Six of his books have been translated into foreign languages, including Indonesian, Korean, Malaysian, Spanish, Hindi and Turkish. Goetsch is a longtime college professor with dual credentials in business and political science/history. He is also a nationally recognized speaker on the subject of leadership and economic development.

He holds an associate degree, bachelor's degree, four master's degrees and a doctorate. In 2016, Goetsch was inducted into the Florida Veteran’s Hall of Fame for his military service and contributions to the state of Florida in the areas of economic development, higher education and civic leadership. He is also a member of his community’s Civic Leaders Hall of Fame.

Goetsch holds numerous awards, including the Spirit of Freedom Award from Freedom Newspapers and the George Washington Medal of Freedom awarded by the Freedoms Foundation at Valley Forge. He was the founding chairman of the Florida Defense Support Task Force, where he worked with then-Gov. Rick Scott and the Florida legislature to help make Florida the most military- and veteran-friendly state in the U.S.

“Energy in the executive is a leading character in the definition of good government. It is essential to the protection of the community against foreign attacks; it is not less essential to the steady administration of the laws; to the protection of property against those irregular and high-handed combinations which sometimes interrupt the ordinary course of justice; to the security of liberty against the enterprises and assaults of ambition, of faction, and of anarchy.” —Alexander Hamilton (1788)