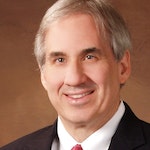 David Limbaugh, brother of radio talk-show host Rush Limbaugh, is an expert in law and politics who writes engaging columns from a fresh, conservative point of view.

He was admitted to the bar in 1978, and has practiced law ever since. During his first year of practice he taught business law at Southeast Missouri State University. He is presently a partner in the firm of Limbaugh, Russell, Payne and Howard, where he specializes in entertainment law, representing clients in the negotiation of radio, television, book and other contracts.

Since late 1998, Limbaugh has been writing a twice-weekly syndicated column.

Limbaugh has written three books, all New York Times Best Sellers: Absolute Power, the Legacy of Corruption in the Clinton-Reno Justice Department (2001), Persecution, How Liberals are Waging War Against Christianity (2003) and Bankrupt, the Intellectual and Moral Bankruptcy of Today's Democratic Party (2006).

David Limbaugh has been married to Lisa Limbaugh since 1986, and has five children, Christen, Courtney, Caitlyn, Scott and Will.