Bear Drowns Reindeer: Link It to Climate Change and It’ll Always Get Attention!

A couple of months ago the journal Polar Biology published a paper about a polar bear’s having chased a reindeer into the sea, caught it, drowned it, dragged the carcass back to land, and feasted on it. “Yes, they can: polar bears Ursus maritimus successfully hunt Svalbard reindeer Rangifer tarandus platyrhynchus” didn’t make a lot of noise at first and probably didn’t deserve to.

But count on popular media to spin and hype what’s actually mundane if it can be tied, even speculatively, to “climate change.” And speculation is all that’s going for this.

Don’t blame the original paper’s authors too much. They were at least a little reserved. One can even feel some sympathy for them. They might have thought there’s no likely connection between climate change and what they saw but knew if they mentioned that connection as possible they’d improve the likelihood of their article’s being published and making news. That’s important to scholars’ careers. So they raised the possibility.

Their abstract, after noting that pre-2000 studies said “polar bears do not attack Svalbard reindeer” (a conclusion that, as a universal negative, could not be proved/known empirically), said that in addition to their video footage of the one bear catching and eating a swimming reindeer, they had observed other recent instances of polar bears preying on reindeer that “suggest[ed]” (note their restraint) “that polar bears now hunt reindeer more frequently than they used to.” I.e., they don’t really even know if what they think has become more frequent really has. They go on, “This increase in hunting is probably” (note their restraint again) “linked to the reduced ice cover, with bears spending more time on land, and a growing reindeer population.” Note that they didn’t explicitly embrace the pre-2000 claim, that they only said the recently observed behavior was “probably” linked to reduced ice cover, and that they acknowledged that “a growing reindeer population” also “probably” contributed to the (apparently, but not definitely) new behavior.

But show video of a polar bear chasing, catching, drowning, and eating a reindeer, and you’re bound to get attention. The paper’s authors did that. And attention came — not surprisingly along with popular media exaggerating the speculative climate-change/“new” behavior connection.

Here’s a set of stills from the video that they published in their article: 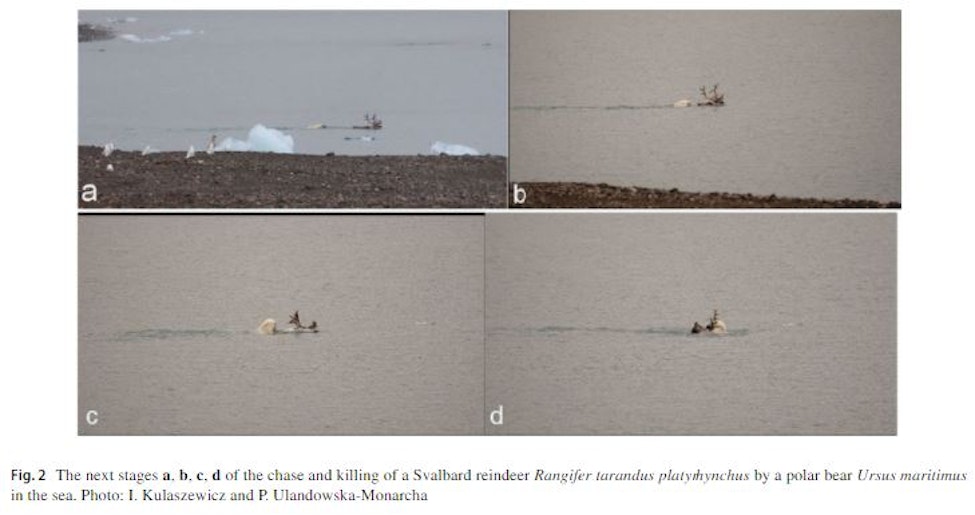 The Independent headlined its report on the study, “Polar bear captured on video drowning reindeer as climate crisis intensifies struggle for food,” a headline and story repeated by Finance.Yahoo.com. IndiaTimes.com “reported,” “Climate crisis may be pushing polar bears to drown reindeer for food ….” The Mirror "reported,“ "Polar bear drowns reindeer and eats carcass after weather forces it onto new diet.” EuroNews.com headlined its story, “Film of polar bear eating reindeer seen as evidence of climate change.” All those headlines and reports hid the tentativeness of the original study. Hype, anyone?

The video is now all over YouTube and embedded in various blog posts. What the “study’s” authors broached as a speculation gets treated as near certainty.

When a friend brought my attention to an article, with video embedded, in the Australian version of Yahoo News, I initially responded: “One suspects this is a mountain out of a molehill. Seems to me quite likely that polar bears have used this hunting tactic for millennia, but rarely enough that it hasn’t often been observed. I’d be interested to know what Susan Crockford, a polar bear specialist, would have to say about this.”

Sure enough, Crockford, author of The Polar Bear Catastrophe that Never Happened and one of the world’s leading polar bear biologists, addressed the matter firmly on her blog shortly after the initial paper appeared and long before popular media latched onto it. Here are a few highlights:

The possibility that a polar bear somewhere in the Arctic might occasionally be successful at stalking and killing a reindeer (aka caribou) shouldn’t surprise anyone, let alone a biologist on Svalbard. But having video footage of the event makes it immediately newsworthy, especially when the researchers vaguely suggest that global warming might be to blame.

Would any serious scientist really think they couldn’t?

Still photos and video footage were taken by staff and researchers at the Polish Polar Station in Hornsund on 21 August 2020 … but we are just hearing about it now. Although the paper is referred to as a ‘study’, the document merely puts the 2020 Svalbard event into some kind of biological and historical context by listing other events that were witnessed or where evidence of similar behaviour had been found.

The reason this paper gets any traction at all is not the rarity of the event but because vivid photos were included in the manuscript and two videos included as ‘Supplemental’ material.

The UK DailyMail story played up the climate change angle, even though the paper presents reduced summer sea ice as only one of two options for more polar bears hunting reindeer on Svalbard over the last 20 years: the other option being more bears and more reindeer. Population numbers of polar bears and reindeer in the early 1970s were so low that protections were put in place and surprise (!), numbers of both species are much higher today (Aars et al. 2017; Prop et al. 2015; Stempnlewicz et al. 2021). More bears and more reindeer mean more possible encounters and more potential reindeer kills.

So, as far as this incident’s providing “evidence of climate change,” another claim bites the dust.

Dr. Beisner is founder and national spokesman of The Cornwall Alliance; former Associate Professor of Historical Theology & Social Ethics at Knox Theological Seminary, and of Interdisciplinary Studies at Covenant College; and author of “Where Garden Meets Wilderness: Evangelical Entry into the Environmental Debate” and “Prospects for Growth: A Biblical View of Population, Resources, and the Future.”

Merrick Garland Is on a Path to the Abyss

Inflation Reduction Act Is the Problem, Not the Solution

Where Did All the Workers Go? Some of Them Bought the Farm