She was born Lady Jayne Seymour Fonda, but earned her reputation as “Hanoi Jane” Fonda after “aiding and abetting” the enemy – North Vietnam – as documented in these photos taken in Hanoi (July 1972): 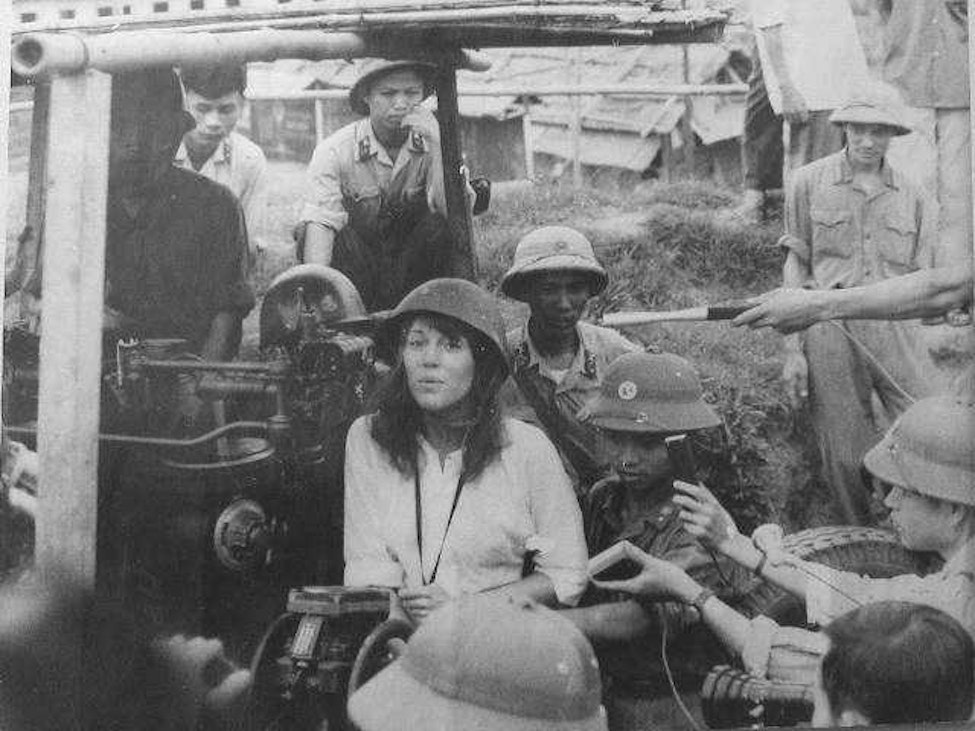 Hanoi Jane on North Vietnamese anti-aircraft gun: A few hundred yards from the location of this photograph, American POWs were being subjected to all manner of torture at the “Hanoi Hilton.” You can read about one of those POWs, Col. Roger Ingvalson, whose aircraft was shot down by an NVA-AAG similar to the gun Hanoi Jane is straddling. 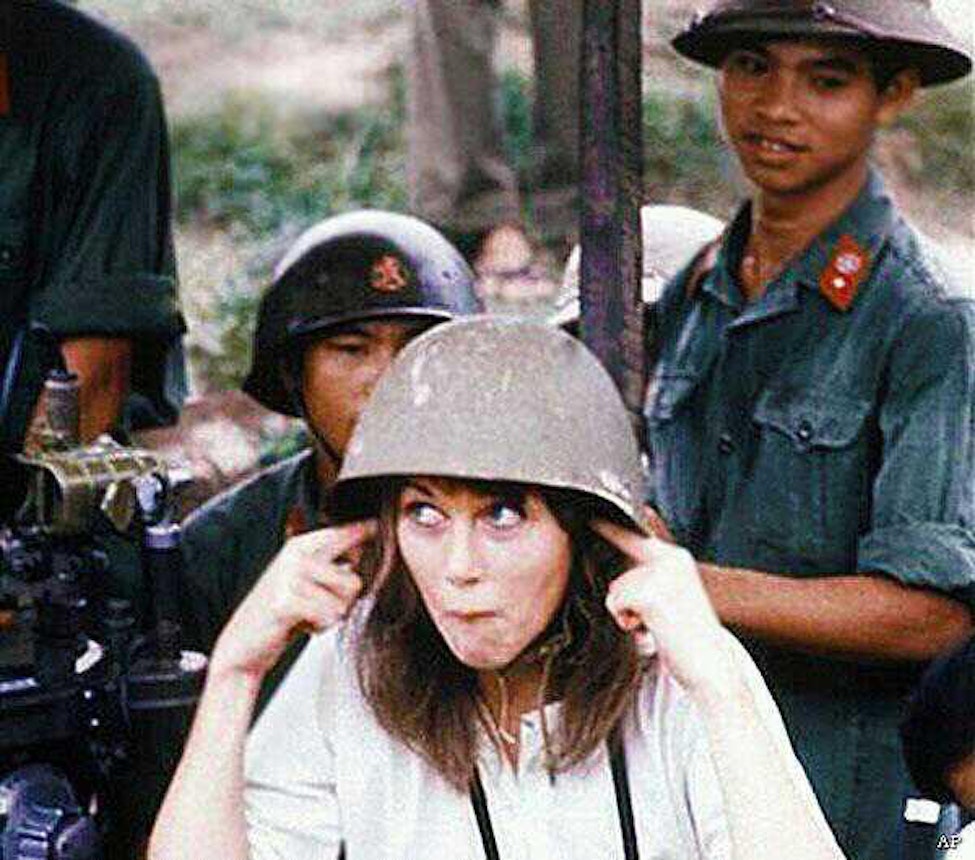 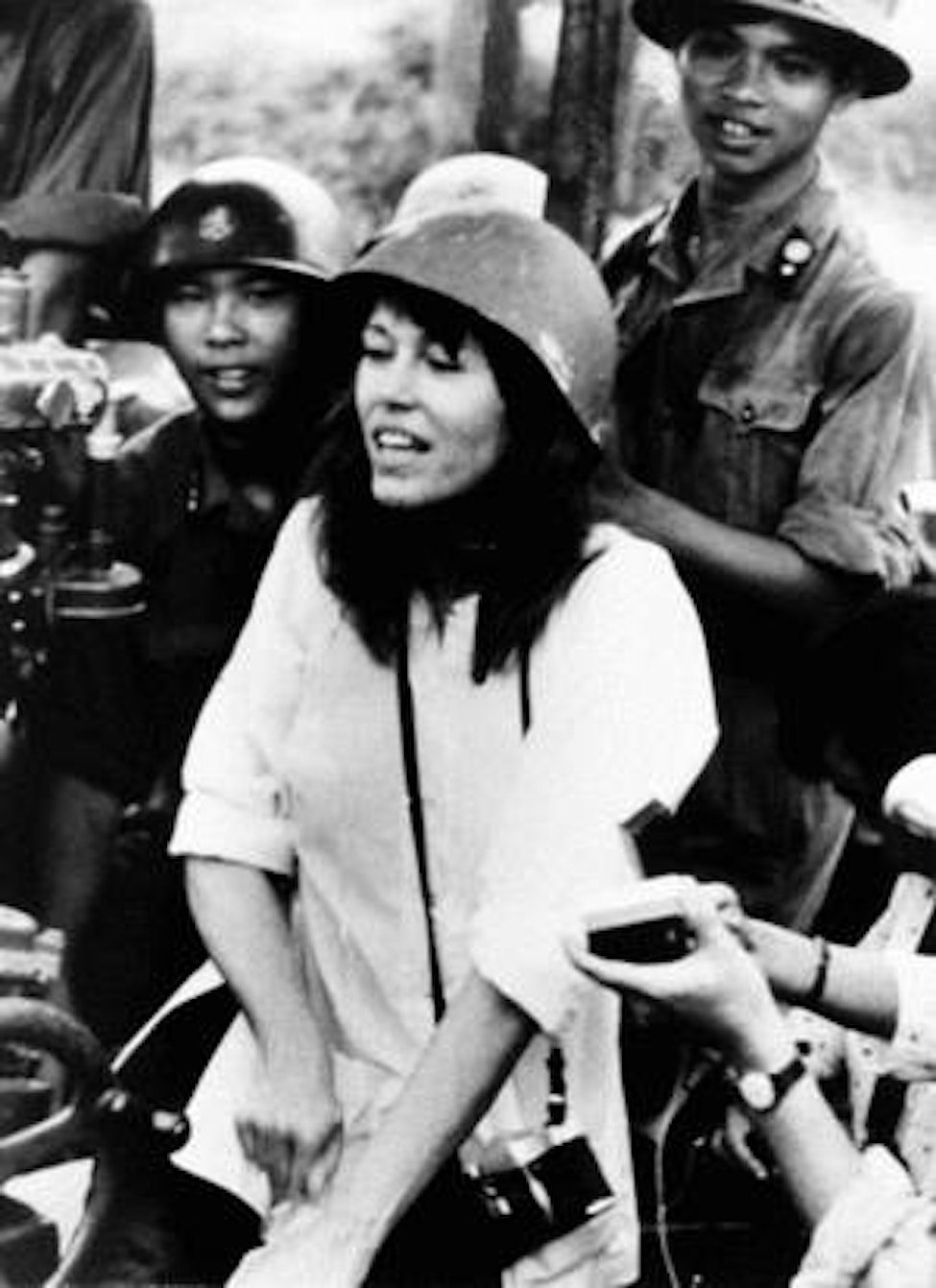 Hanoi Jane laughing it up 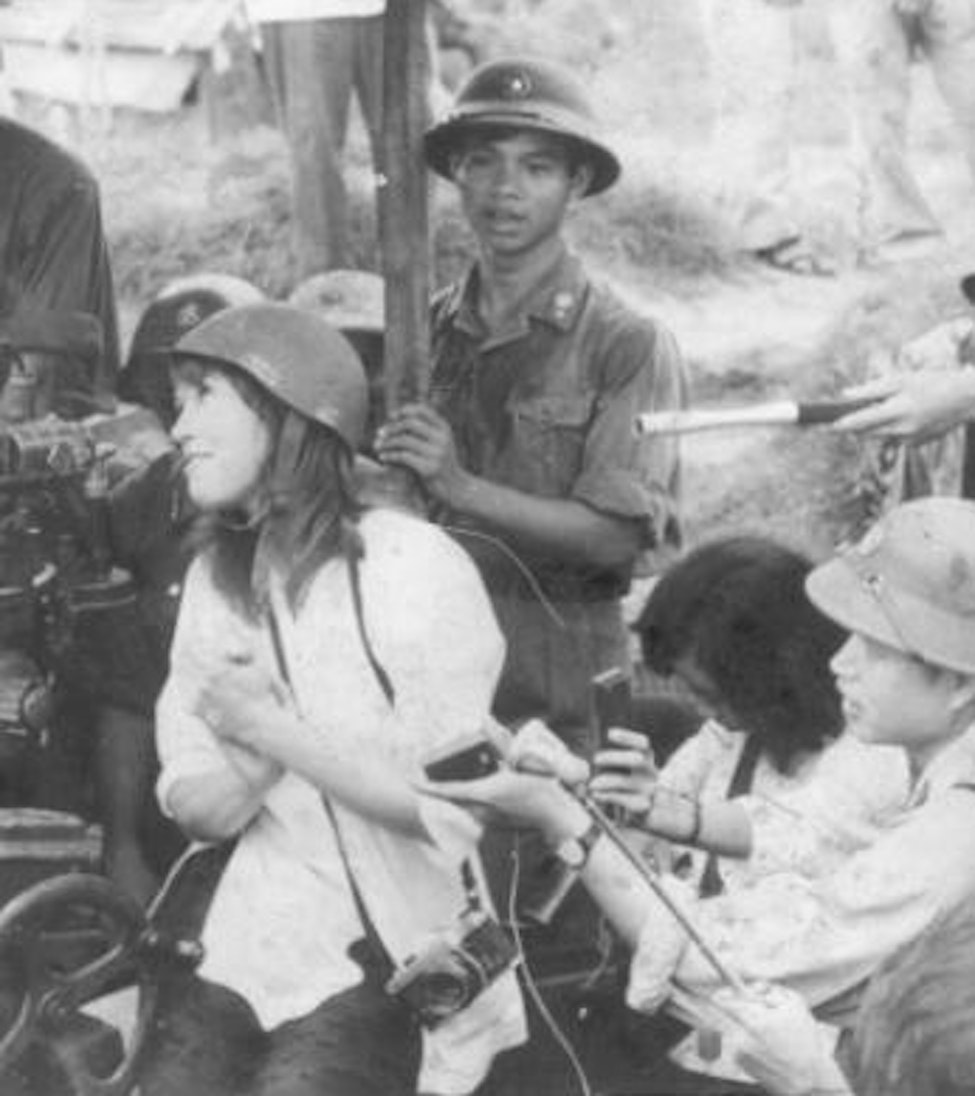 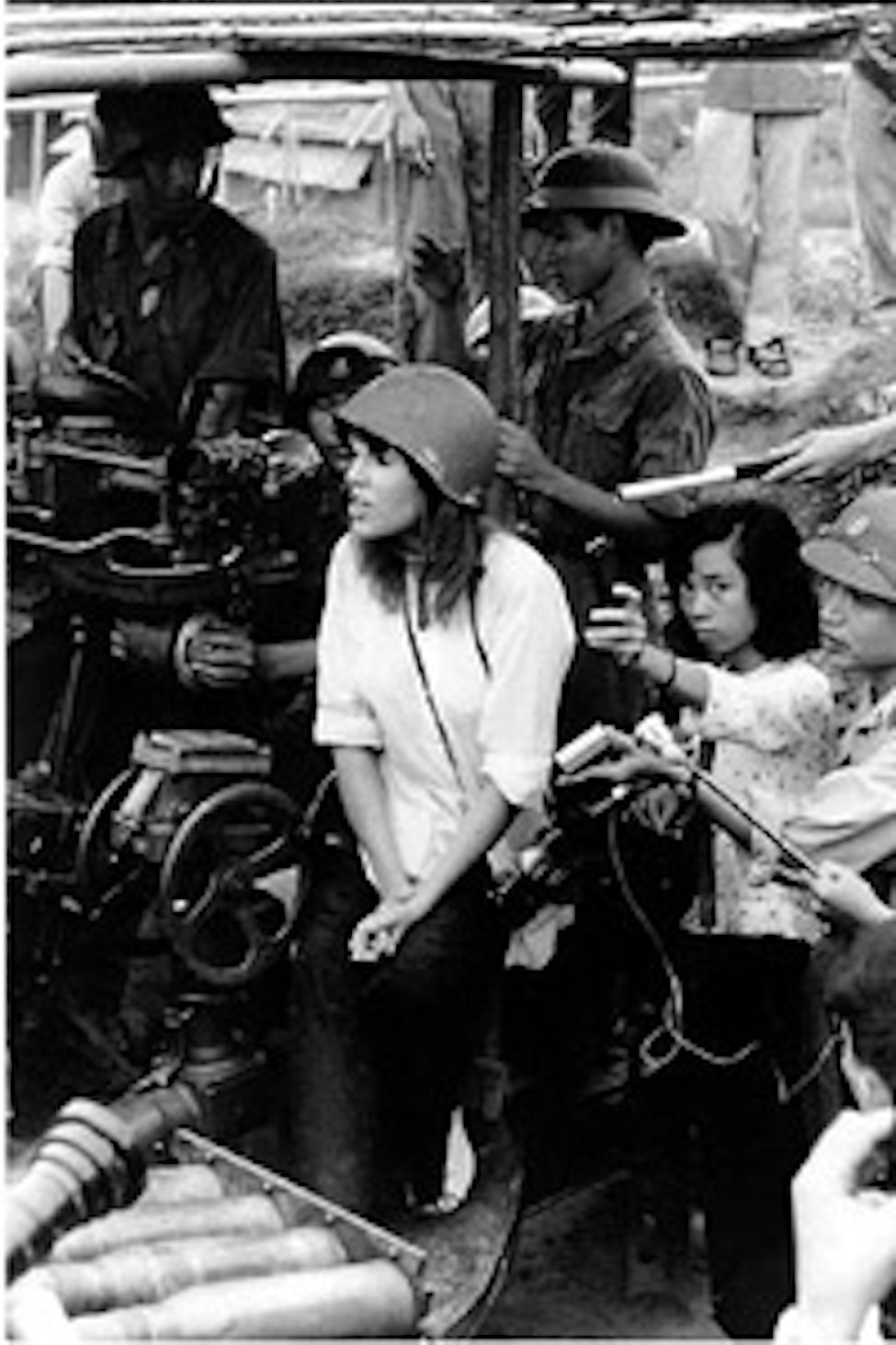 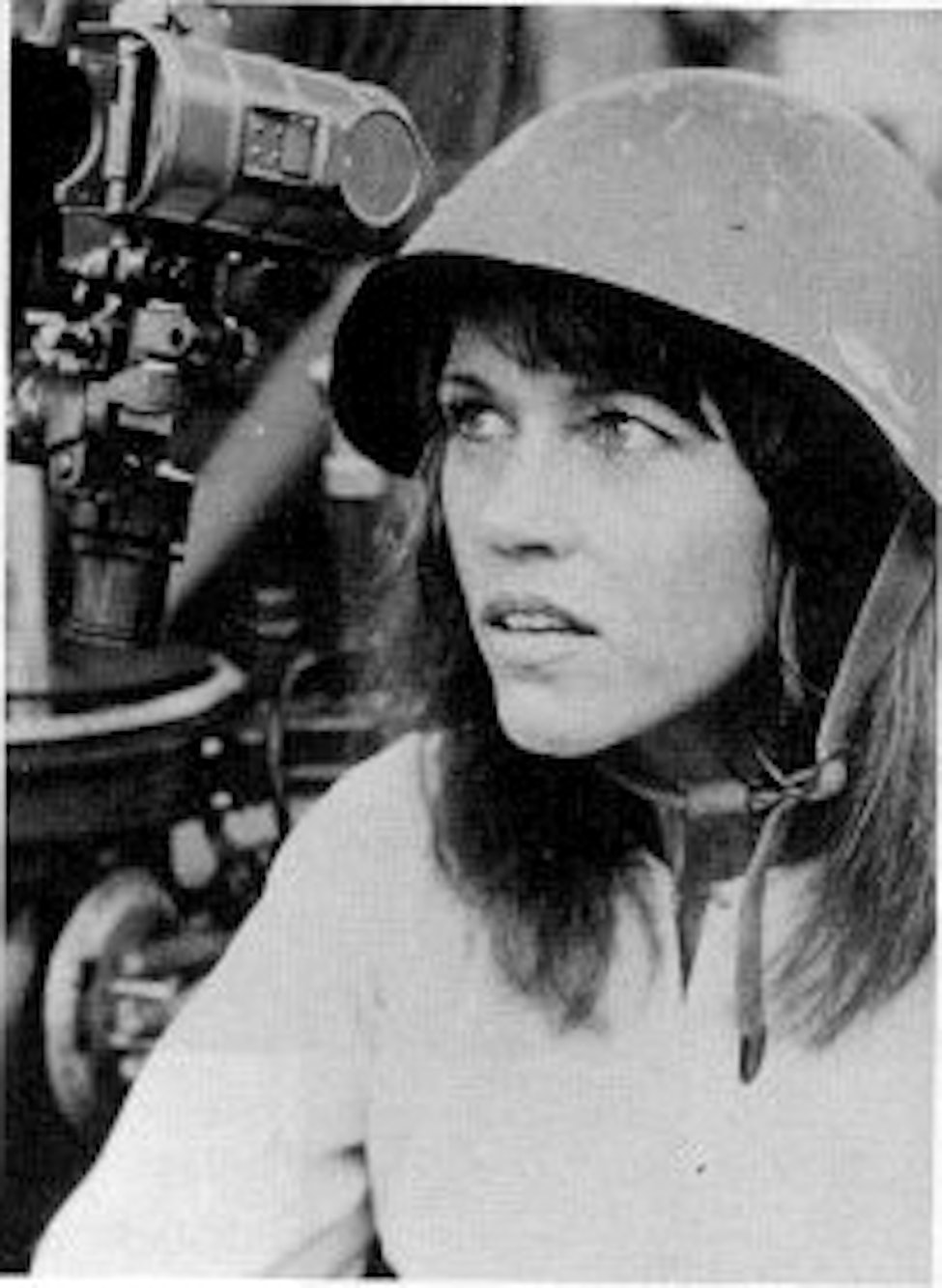 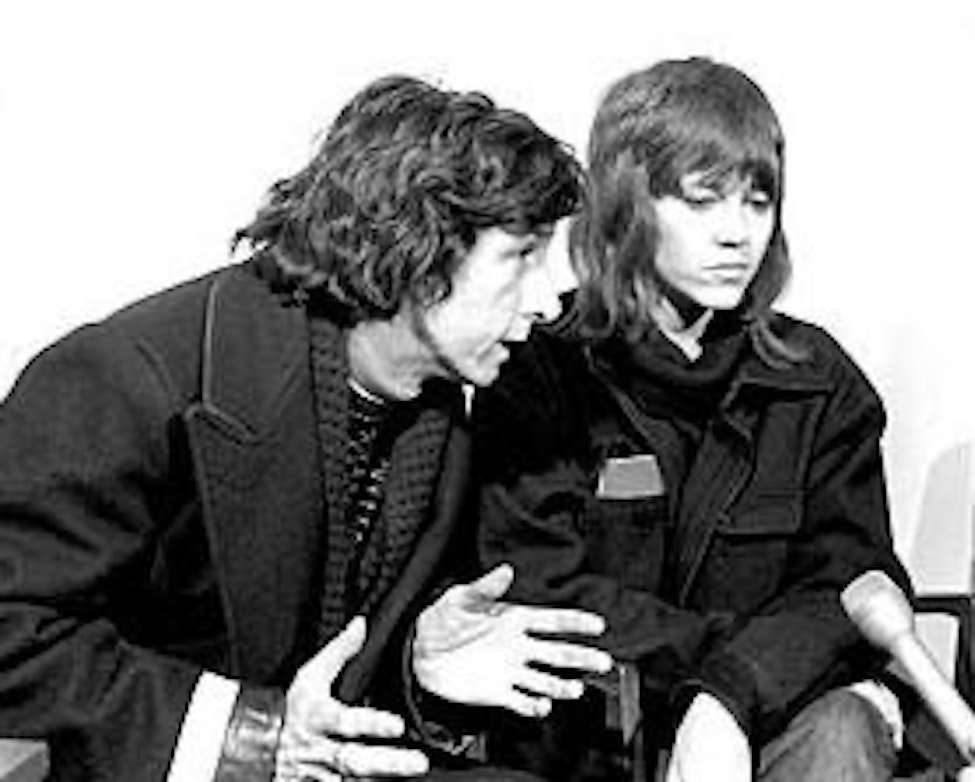 With Tom Hayden back from Hanoi

As for the success of anti-democracy protests by radical protagonists like Fonda, John Kerry and others, Hanoi could not have been more pleased.

General Vo Nguyen Giap, supreme leader of the North Vietnamese Army, told CBS in a 1989 interview: “We paid a high price [during the Tet offensive] but so did you [Americans] … not only in lives and materiel. Do not forget the war was brought into the living rooms of the American people. … The most important result of the Tet offensive was it made you de-escalate the bombing, and it brought you to the negotiation table. It was, therefore, a victory…. The war was fought on many fronts. At that time the most important one was American public opinion. ”

More to the point, in a 1995 interview with The Wall Street Journal, Bui Tin, a communist contemporary of Giap and Ho Chi Minh, who was serving as an NVA colonel assigned to the general staff at the time Saigon fell, had this to say about the Leftmedia and Soviet puppets like “Hanoi” Jane Fonda and John Kerry: “[They were] essential to our strategy. Support of the war from our rear was completely secure while the American rear was vulnerable. Every day our leadership would listen to world news over the radio to follow the growth of the American antiwar movement. Visits to Hanoi by people like Jane Fonda, and former Attorney General Ramsey Clark and ministers gave us confidence that we should hold on in the face of battlefield reverses.”

Most notably, Bui observed, that the 1968 Tet Offensive was “to weaken American resolve during a presidential-election year. We had the impression that American commanders had their hands tied by political factors. Your generals could never deploy a maximum force for greatest military effect.”

Sixteen years later, under enormous pressure after Ronald Reagan had restored the honorable social standing of military service, Fonda admitted to former American POWs and their families that she regretted the pain she caused them. Few accepted her apology. 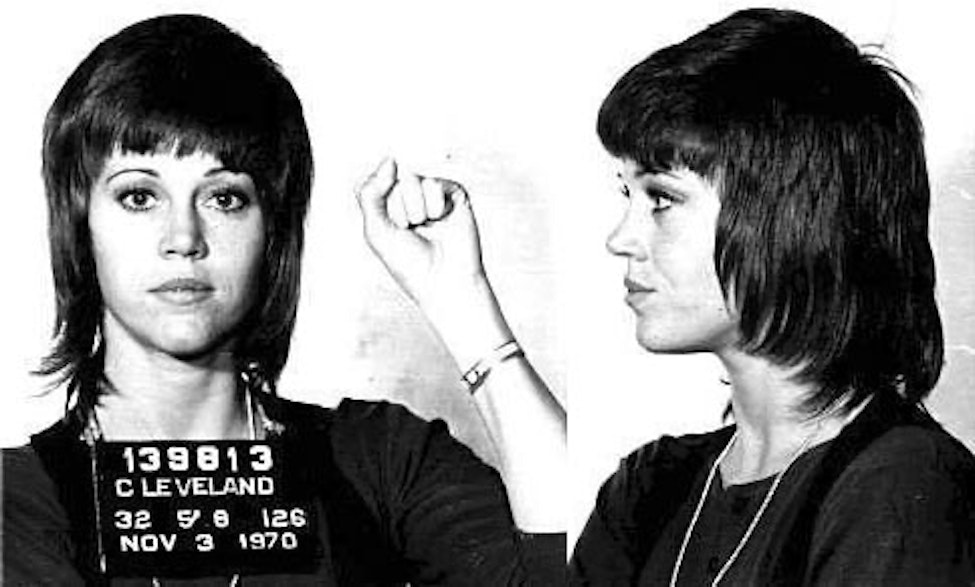 In a 2005 interview with CBS, Fonda reiterated that she had no regrets about her trip to North Vietnam in 1972. “There are hundreds of American delegations that had met with the POWs. Both sides were using the POWs for propaganda… It’s not something that I will apologize for.” 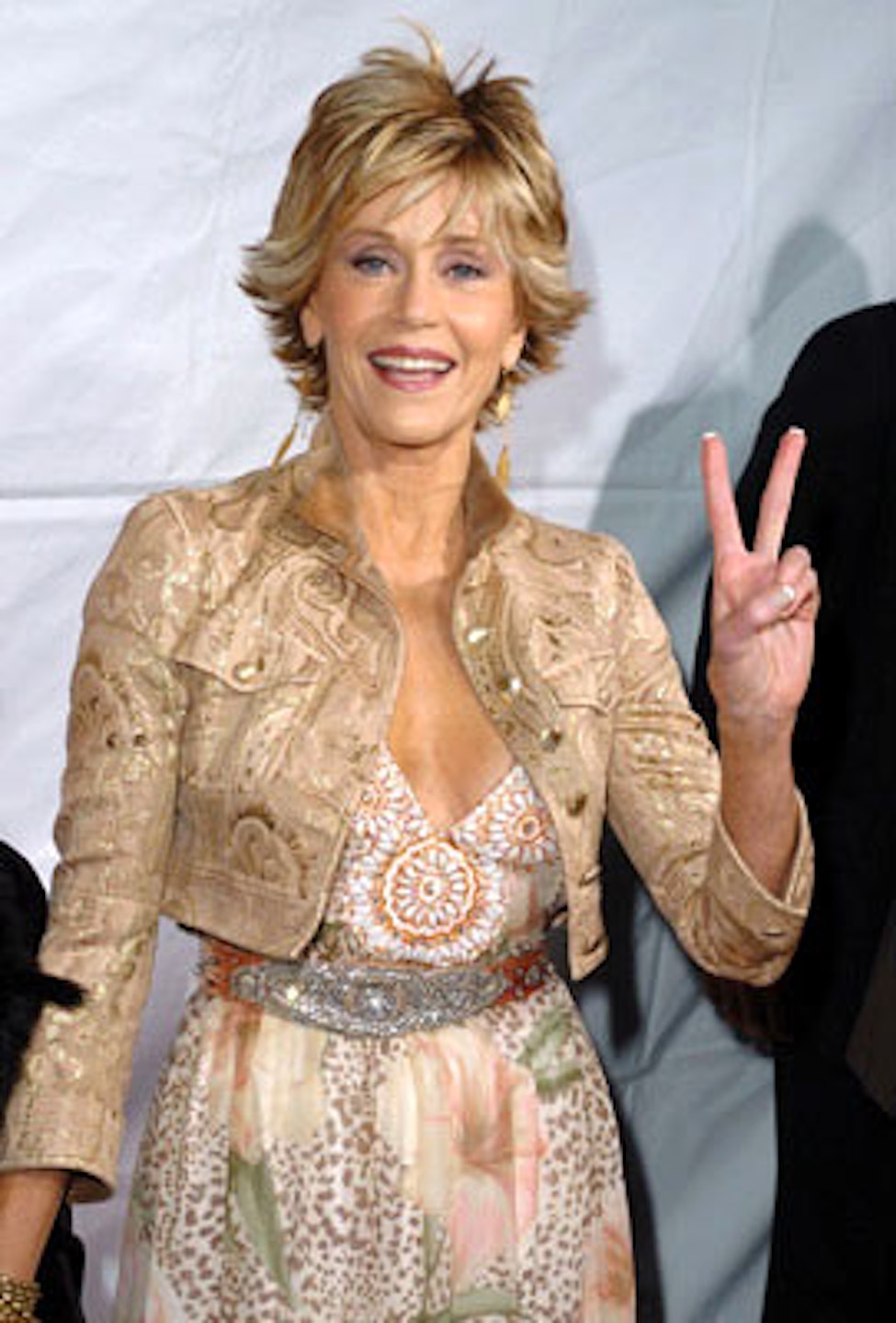 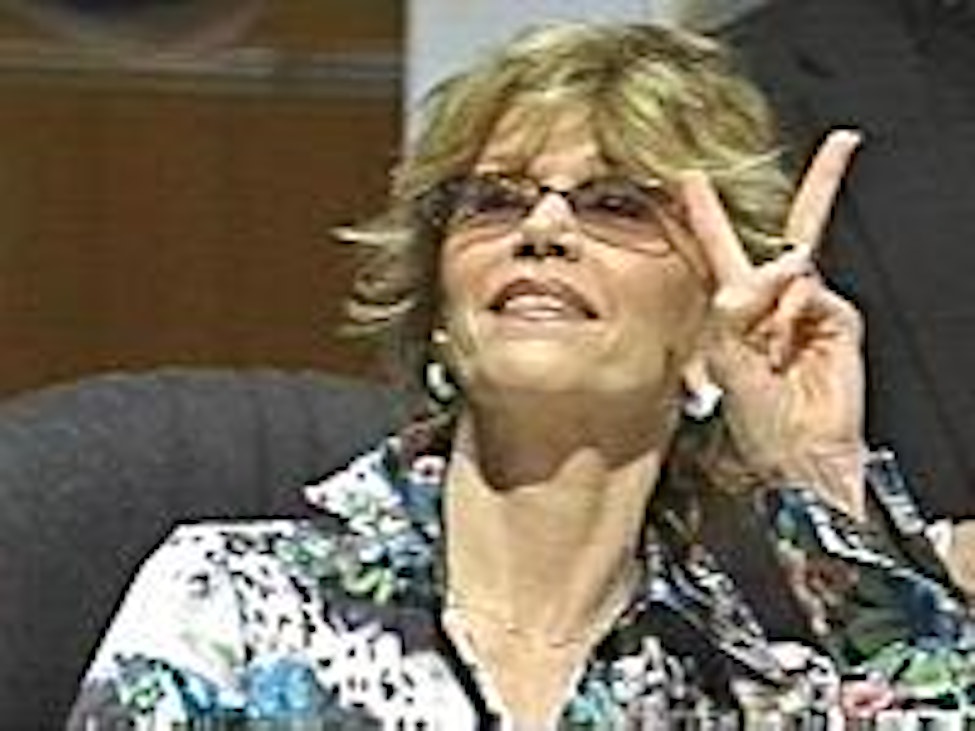 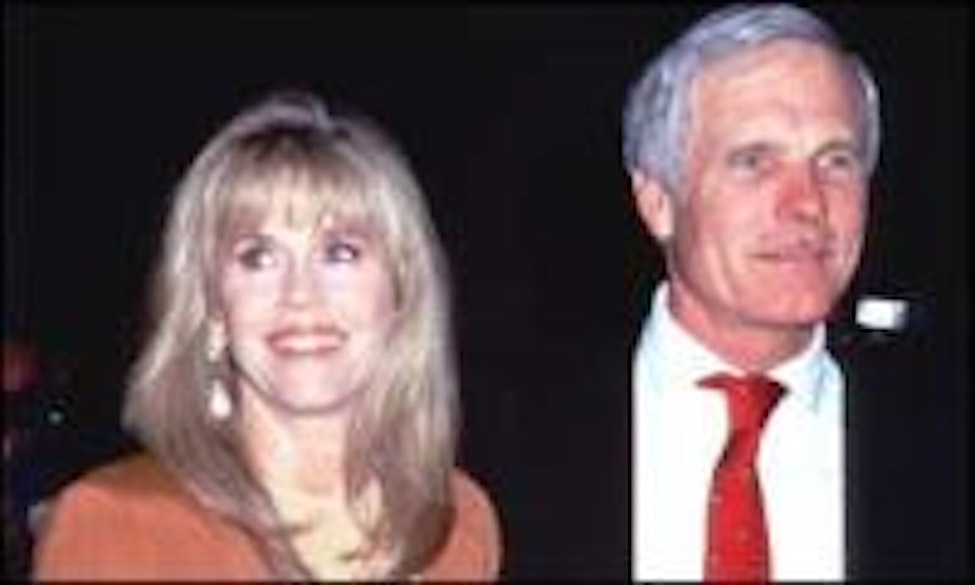 Fonda with last in husband line, Ted Turner, Village drunk and self-appointed ambassador to North Korea, who observed recently, “Obviously, I don’t like to see nuclear proliferation, and I’m very upset about [the North Korean test],” as opposed to his earlier position being “absolutely convinced that the North Koreans are absolutely sincere” about not developing nuclear weapons. 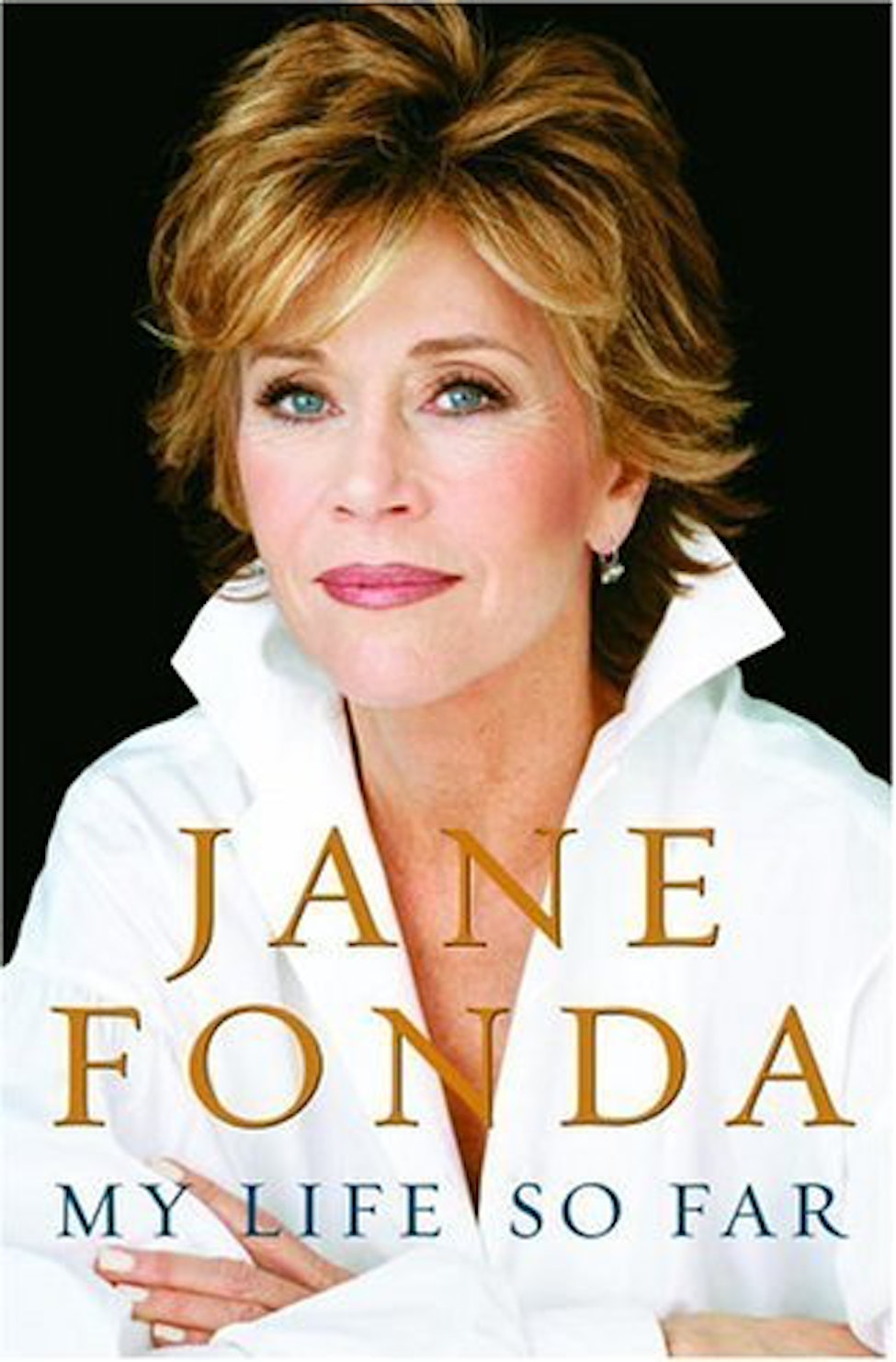 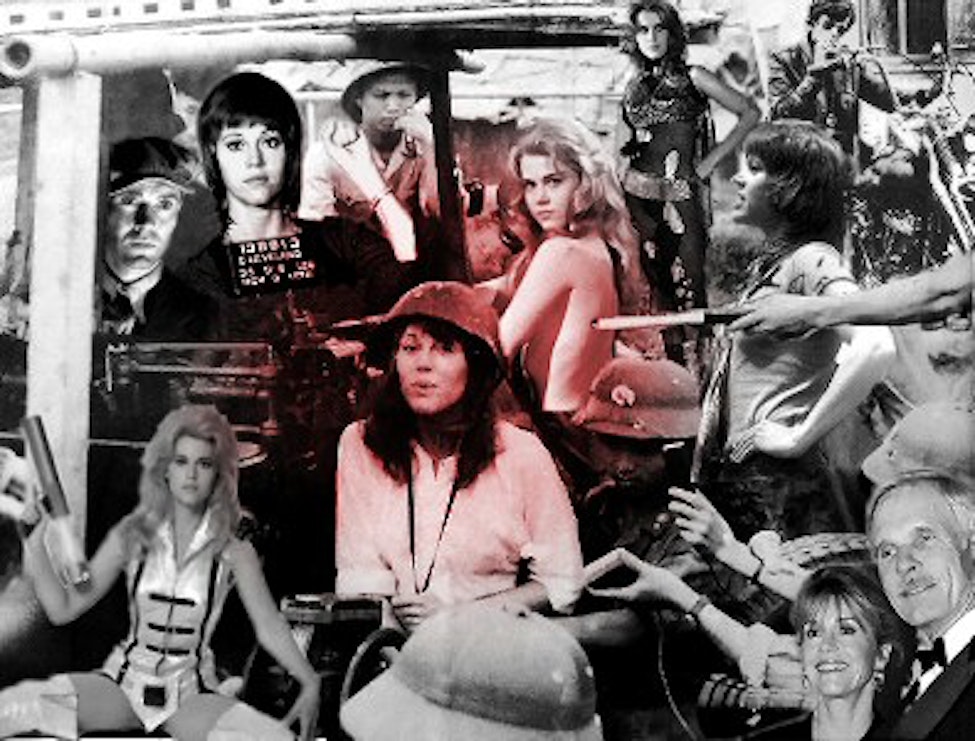 “The foundation of our Empire was not laid in the gloomy age of Ignorance and Superstition, but at an Epocha when the rights of mankind were better understood and more clearly defined, than at any former period.” —George Washington (1783)