“When we assumed the Soldier, we did not lay aside the Citizen; and we shall most sincerely rejoice with you in the happy hour when the establishment of American Liberty, upon the most firm and solid foundations shall enable us to return to our Private Stations in the bosom of a free, peaceful and happy Country.” —George Washington (1775)

We set aside Veterans Day to honor the high price of sacrifice paid by generations of Soldiers, Sailors, Airmen, Marines, and Coastguardsmen, among the more than 41 million veterans who have served our nation since the American Revolution, who have carried forward the banner of Liberty since the first shots were fired at Lexington and Concord. Millions of American Patriots have, for generations, honored their sacred oaths “to Support and Defend” the Liberty that was “endowed by our Creator,” as affirmed in our “Declaration of Independence and enshrined in our Constitution. 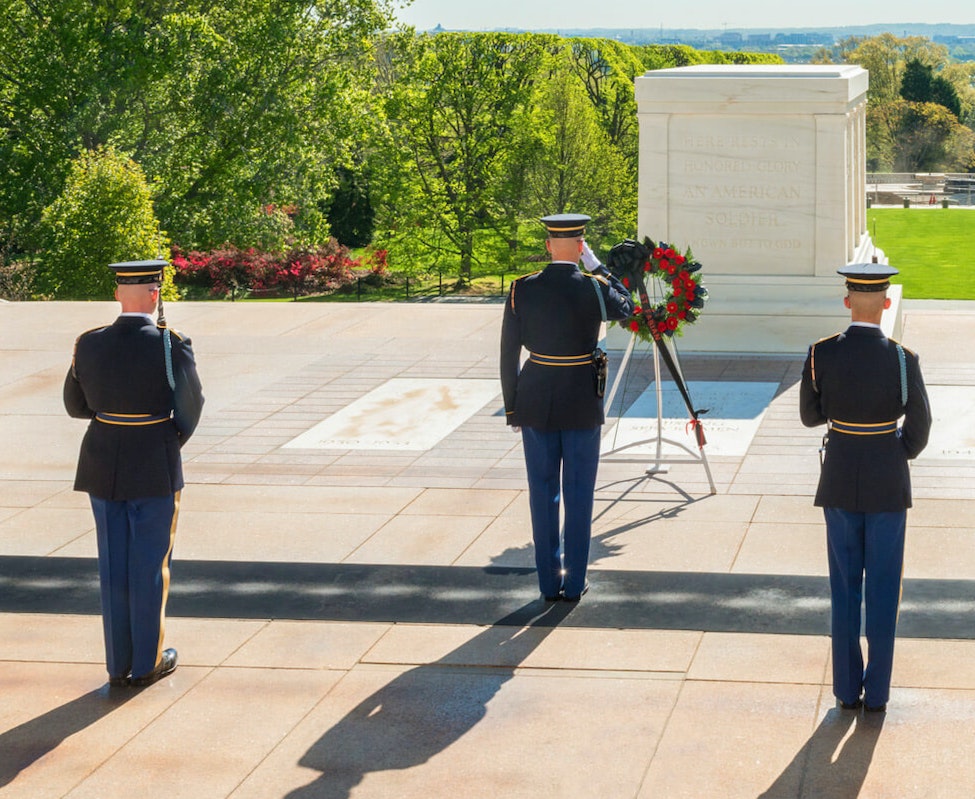 On 11 November 1921, an unknown American soldier from World War I was buried in Arlington National Cemetery in the Tomb of the Unknown, in recognition of WWI veterans and in conjunction with the cessation of hostilities at 1100 on 11 November 1918 — the 11th hour of the 11th day of the 11th month. Veterans Day is observed by a moment of silence and prayer at the 11th hour.

In the years which followed, the remains of three additional warriors have been laid to rest at the tomb, one each from World War II, the Korean War and the Vietnam War. The 2021 observance marked the historic 100th anniversary of that solemn first interment.

Inscribed on the Tomb of the Unknown Soldier are the words, "Here lies in honored glory an American soldier known but to God.”

On November 11, 1921, President Warren G. Harding stated: “On the threshold of eternity, many a soldier, I can well believe, wondered how his ebbing blood would color the stream of human life, flowing on after his sacrifice. … Standing today on hallowed ground … it is fitting to say that his sacrifice, and that of the millions dead, shall not be in vain.” He then called on those present to join him in the Lord’s Prayer: Our Father who are in heaven, hallowed be Thy name. Thy kingdom come, Thy will be done on earth, as it is in heaven. Give us this day our daily bread, and forgive us our trespasses as we forgive those who trespass against us. And lead us not into temptation, but deliver us from evil, for Thine is the kingdom, and the power, and the glory, forever. Amen.“

President Harding requested: "All citizens indulge in a period of silent thanks to God for these valorous lives and of supplication for His Divine mercy on our beloved country.”

In 1924, at the Monument to the American Expeditionary Forces, President Calvin Coolidge stated: “They did not regard it as a national or personal opportunity for gain or fame or glory, but as a call to sacrifice for the support of humane principles and spiritual ideals. … If anyone doubts the depth and sincerity of the attachment of the American people to their institutions and Government, if anyone doubts the sacrifices which they have been willing to make in behalf of those institutions and for what they believe to be the welfare of other nations, let them gaze upon this monument and other like memorials that have been reared in every quarter of our broad land. Let them look upon the representative gatherings of our VETERANS, and let them remember that America has dedicated itself to the service of God and man.”

In 1954 President Dwight D. Eisenhower, former Supreme Allied Commander of World War II, signed legislation formally changing Armistice Day to Veterans Day. Eisenhower wrote, “Let us solemnly remember the sacrifices of all those who fought so valiantly, on the seas, in the air, and on foreign shores, to preserve our heritage of freedom, and let us re-consecrate ourselves to the task of promoting an enduring peace so that their efforts shall not have been in vain.”

Eisenhower declared: “All the history of America bears witness to this truth. Out of faith in God, and through faith in themselves as His children, our forefathers designed and built this Republic. We remember the picture of the Father of our Country, on his knees at Valley Forge seeking divine guidance in the cold gloom of a bitter winter. Thus Washington gained strength to lead to independence a nation dedicated to the belief that each of us is divinely endowed with indestructible rights. We remember, too, that three-fourths of a century later, on the battle-torn field of Gettysburg, and in the silence of many a wartime night, Abraham Lincoln recognized that only under God could this Nation win a new birth of freedom. … By the millions, we speak prayers, we sing hymns — and no matter what their words may be, their spirit is the same — ‘In God is our trust.’”

Of American Patriots, General Douglas MacArthur declared, in his notable May 1962 address to West Point cadets:

The soldier, above all other men, is required to practice the greatest act of religious training — sacrifice. In battle and in the face of danger and death, he discloses those Divine attributes which his Maker gave when He created man in His own image. … No physical courage and no brute instinct can take the place of Divine help which alone can sustain him. However horrible the incidents of war may be, the soldier who is called upon to offer and to give his life for his country is the noblest development of mankind. … My estimate of him was formed on the battlefields many, many years ago, and has never changed. I regarded him then, as I regard him now, as one of the world’s noblest figures; not only as one of the finest military characters, but also as one of the most stainless. His name and fame are the birthright of every American citizen. In his youth and strength, his love and loyalty, he gave all that mortality can give. He needs no eulogy from me, or from any other man. He has written his own history and written it in red on his enemy’s breast. But when I think of his patience under adversity, of his courage under fire, and of his modesty in victory, I am filled with an emotion of admiration I cannot put into words. He belongs to history as furnishing one of the greatest examples of successful patriotism. He belongs to posterity as the instructor of future generations in the principles of liberty and freedom. He belongs to the present, to us, by his virtues and by his achievements. … Duty, honor, country: Those three hallowed words reverently dictate what you ought to be, what you can be, what you will be. They are your rallying point to build courage when courage seems to fail, to regain faith when there seems to be little cause for faith, to create hope when hope becomes forlorn.

Of such sacrifice, 19th century philosopher John Stuart Mill, in his essay “The Contest In America,” wrote, “War is an ugly thing, but not the ugliest of things; the decayed and degraded state of moral and patriotic feeling which thinks nothing worth a war, is worse. A man who has nothing which he cares more about than he does about his personal safety is a miserable creature who has no chance at being free, unless made and kept so by the exertions of better men than himself.” 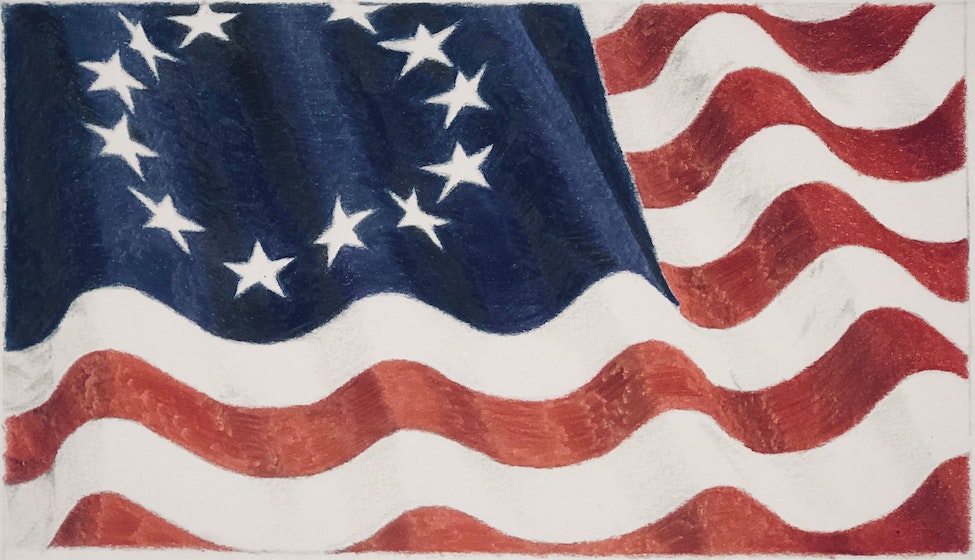 It is a disgraceful irony that, to this day, such “miserable creatures” use their public platforms to dishonor the sacrifices of generations of Patriot veterans who have defended their freedom. 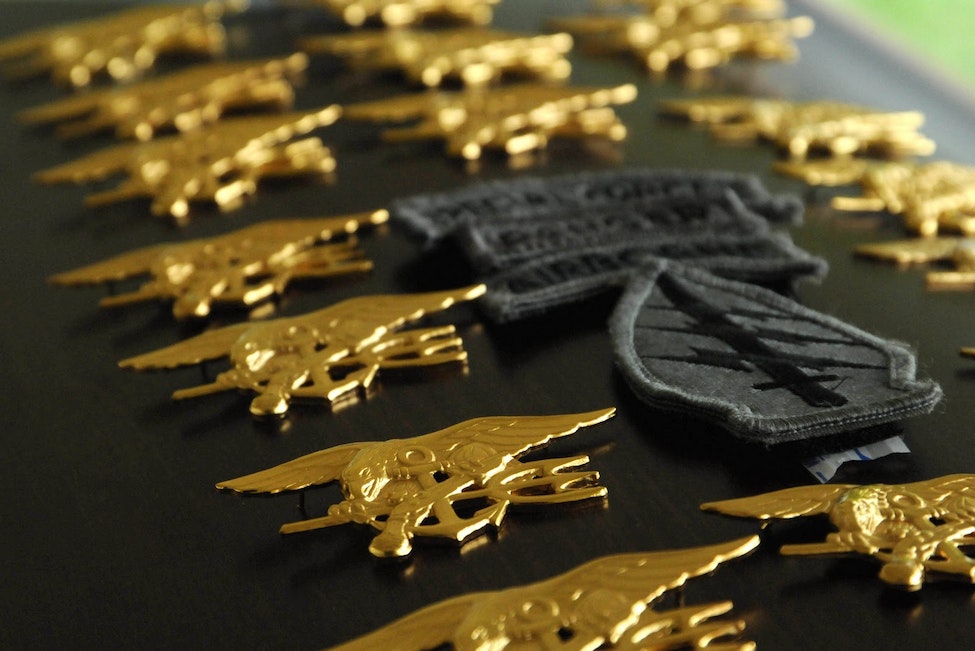 At one point in their lives, every veteran wrote a blank check made payable to “The People of the United States of America,” for an amount up to and including their life.

To genuinely demonstrate your gratitude to our military veterans and those still serving, our fellow American Patriots who have and continue to defend the Liberty we enjoy, here is my suggestion: Strive to be, first and foremost, an American citizen worthy of their sacrifice.

As President Ronald Reagan warned: “Freedom is never more than one generation away from extinction. We didn’t pass it on to our children in the bloodstream. It must be fought for, protected, and handed on for them to do the same, or one day we will spend our sunset years telling our children and our children’s children what it was once like in the United States where men were free.”

President Reagan also declared: “Peace fails when we forget what we stand for. It fails when we forget that our republic is based on firm principles, that with them we are the last best hope of man. … Peace is only maintained and won by those who have clear eyes and brave minds. In memory of those who gave the last full measure of devotion, may our efforts to achieve lasting peace gain strength.”

“Mighty men of valor, men trained for war, who could handle shield and spear, and whose faces were like the faces of lions.” —1 Chronicles 12:8

On this Veterans Day, and every day of the year, may God bless our men and women in uniform, who have stood and continue to stand in harm’s way. For their steadfast devotion to duty, honor and country, we, the American people, offer them and their families our humble gratitude and heartfelt thanks. It is with eternal gratitude that we remember those who have paid the ultimate price in service to our nation.

Recommended Reading: Mark Alexander’s tributes to our military Patriots, and his father and two uncles, all three veterans of World War II, USN, USA, and USMC.

Footnote: Because we receive inquiries, Veterans Day has no apostrophe in its official spelling, as the day does not belong to veterans but is rather for honoring them.