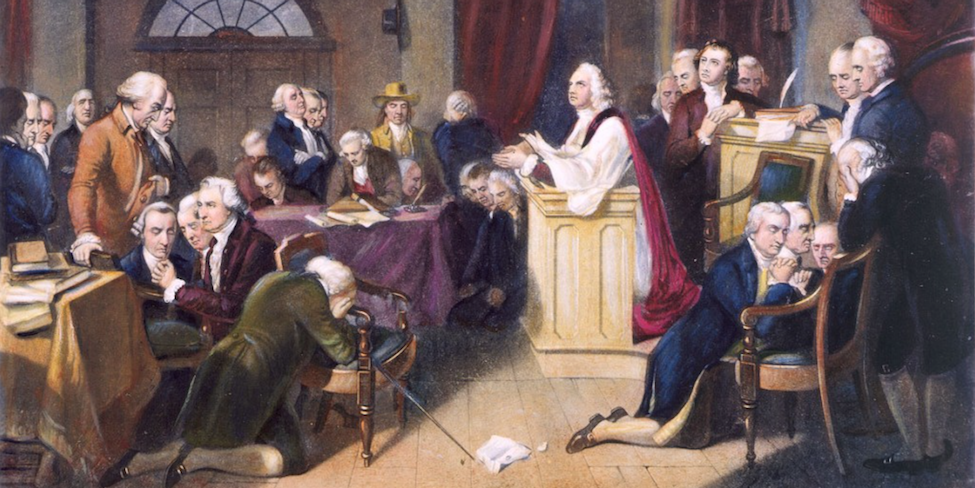 In 1775, on the eve of Revolution, the First Continental Congress called for “a day of publick humiliation, fasting, and prayer.” Indeed, our Founders saw a national day of prayer as a fitting observance. As Ronald Reagan recalled in 1983, “The Treaty of Paris officially ended the long, weary Revolutionary War during which a National Day of Prayer had been proclaimed every spring for eight years.” The tradition continued with America’s first president, George Washington, and numerous presidents thereafter.

In 1796, Washington announced a national day of prayer and encouraged the nation “to … render sincere and hearty thanks to the great Ruler of nations … for the possession of constitutions of government.” Washington further requested his countrymen to “fervently beseech the kind Author of these blessings … to establish habits of sobriety, order, and morality and piety.”

In March of 1798 and 1799, President John Adams instilled national days of prayer in which he enjoined “the citizens … [to] call to mind our numerous offenses against the Most High God, confess them before Him with the sincerest penitence, implore His pardoning mercy, through the Great Mediator and Redeemer, for our past transgressions, and that through the grace of His Holy Spirit, we may be disposed and enabled to yield a more suitable obedience to His righteous requisitions.”

The War of 1812 motivated President James Madison to seek “a Day of Public Humiliation and Fasting and of Prayer to Almighty God for the safety and welfare of these States … of confessing their sins and transgressions, and of strengthening their vows of repentance … that He would be graciously pleased to pardon all their offenses.”

In response to President William Henry Harrison’s death in April 1841, President John Tyler ordered a national day of prayer, noting: “When a Christian people feel themselves to be overtaken by a great public calamity, it becomes them to humble themselves under the dispensation of Divine Providence.” This was followed by another national day of payer in 1849, when cholera was ravaging the nation. President Tyler said, “It is fitting that a people whose reliance has ever been in His protection should humble themselves before His throne … acknowledging past transgressions, ask a continuance of the Divine mercy. It is earnestly recommended that the first Friday in August be observed throughout the United States as a Day of Fasting, Humiliation and Prayer.”

In prescribing a national day of prayer in 1860 — just before the American Civil War broke out — President James Buchanan said: “Let us … unite in humbling ourselves before the Most High, in confessing our individual and national sins. Let me invoke every individual, in whatever sphere of life he may be placed, to feel a personal responsibility to God and his country for keeping this day holy.”

During the height of war in 1863, President Abraham Lincoln put forth a national day of prayer. He observed: “We have forgotten God. We have forgotten the gracious Hand which preserved us in peace, and multiplied and enriched and strengthened us; and we have vainly imagined, in the deceitfulness of our hearts, that all these blessings were produced by some superior wisdom and virtue of our own. Intoxicated with unbroken success, we have become too self-sufficient to feel the necessity of redeeming and preserving grace, too proud to pray to the God that made us! It behooves us then to humble ourselves before the offended Power, to confess our national sins and to pray for clemency and forgiveness.”

In April 1865, President Andrew Johnson announced “a Day for Special Humiliation and Prayer in consequence of the assassination of Abraham Lincoln.”

In 1901, President Theodore Roosevelt, in response to the assassination of his predecessor, William William, noted: “President McKinley crowned a life of largest love for his fellow men, of earnest endeavor for their welfare, by a death of Christian fortitude … Now, therefore, I, Theodore Roosevelt, President of the United States of America, do appoint … September 19 … as a Day of Mourning and Prayer throughout the United States … I earnestly recommend all the people to assemble on that day in their respective places of divine worship, there to bow down in submission to the will of Almighty God, and to pay out of full hearts the homage of love and reverence to the memory of the great and good President.”

The United States was thrust into World War I in 1918, to which the commander in chief responded: “I, Woodrow Wilson, President of the United States of America, do hereby proclaim … a Day of Public Humiliation, Prayer and Fasting, and do exhort my fellow-citizens … to pray Almighty God that He may forgive our sins.”

In 1923, President Calvin Coolidge remarked: “Warren Gamaliel Harding, twenty-ninth President of the United States, has been taken from us. … Now, therefore, I, Calvin Coolidge, President of the United States, do appoint … a Day of Mourning and Prayer throughout the United States. I earnestly recommend the people to assemble on that day in their respective places of divine worship, there to bow down in submission to the will of Almighty God, and to pay out of full hearts the homage of love and reverence to the memory of the great and good President whose death has so sorely smitten the nation.”

In 1941, when the U.S. was forced into World War II, President Franklin D. Roosevelt said, “The year 1941 has brought upon our Nation a war of aggression by powers dominated by arrogant rulers whose selfish purpose is to destroy free institutions. … Therefore, I … do hereby appoint the first day of the year 1942 as a Day of Prayer, of asking forgiveness for our shortcomings of the past, of consecration to the tasks of the present, of asking God’s help in days to come.‘”

In 1952, Congress established the National Day of Prayer as an annual event by a joint resolution, signed into law by President Harry Truman. The NDP designation (36 U.S.C. § 119) calls for the nation “to turn to God in prayer and meditation.” Each year since its inception, the president has signed a proclamation, encouraging all Americans to pray on this day.

Prayer is Almighty God’s prerequisite for true hope and change, and our nation needs an abundance of both right now. The Patriot Post’s National Advisory Board and staff invite you to join us, and millions of our countrymen, in prayer for our nation today at 12:00 local time.

Editor’s note: Thanks to Bill Federer for providing much of this research.

Note: For an excellent resource on nation’s founding, read Mark Alexander’s essays on American Liberty and the National Day of Prayer. You can also purchase our highly acclaimed pocket size Patriot Primers on American Liberty in bulk for distribution to students, grassroots organizations, civic clubs, political gatherings, military and public service personnel, professional associations, and others.