Our Founders Were Forthright About Faith

“The Commander in Chief directs that divine Service be performed every Sunday at 11 oClock in those Brigades to which there are Chaplains; those which have none to attend the places of worship nearest to them. It is expected that Officers of all Ranks will by their attendence set an Example to their men. While we are zealously performing the duties of good Citizens and soldiers we certainly ought not to be inattentive to the higher duties of Religion. To the distinguished Character of Patriot, it should be our highest Glory to add the more distinguished Character of Christian. The signal Instances of providential Goodness which we have experienced and which have now almost crowned our labours with complete Success, demand from us in a peculiar manner the warmest returns of Gratitude and Piety to the Supreme Author of all Good.” –George Washington, General Orders, (May 2nd, 1778) 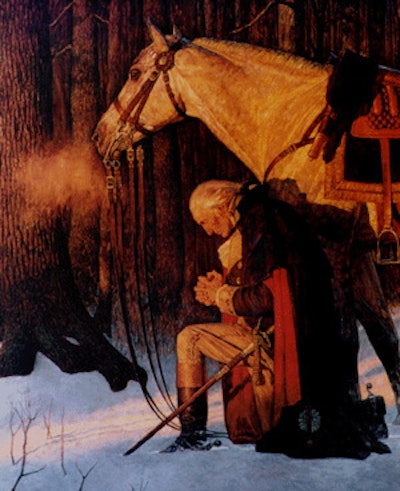 However, the most hallowed religious observance for our family – that with the most deeply rooted traditions, is Christmas. It is not a commercial feeding frenzy for us, but a quiet and reverent time of rest and celebration of the birth of Christ, punctuated by extended family festivities.

Unfortunately there is a perennial societal tension now associated with Christmas. If not for its dire implications for the future of Liberty, the seasonal contortions over “non-offensive greetings” would be humorous. The Left insists the word “Christmas” violates the phony “Wall of Separation” doctrine if a government employee deigns to utter it within earshot, and that it is too ethnocentric for corporate use.

Some years ago, The Patriot Post coined the greeting “Happy Christmahanakwamadan.” We did so in response to the fashionable PC crowd’s ludicrous demands for “inclusive faith neutral” greetings. We also published our legal department disclaimer outlining the terms of acceptance for the greeting as a counterpoint to retailers vying for your business who have instituted policies discouraging or outright prohibiting any mention of “Christmas.” We do not challenge private sector employer’s right to dictate corporate policies on such matters.

However, the ongoing campaign to censor Christmas from public forums is another matter.

For example, this year there were disturbing new guidelines advising members of Congress and government employees that it would be unethical and even illegal to use specific religious greetings in conversation and correspondence with constituents and service recipients. While Virginia Rep. Scott Rigell recorded his rejection of those guidelines, this is an ominous development and foreboding precedent.

Ironically, it’s often these same censors who take shortcuts such as wishing folks “Happy Holidays” or “Merry Xmas.” Perhaps they’re unaware that the word holiday is derived from “Holy Day,” and that Xmas is derived from combining the Greek letter “chi,” denoting “Christ,” with the Old English word for “Mass.”

Meanwhile, over in the Executive Branch, Barack Hussein Obama recently found Jesus when dedicating the 60-foot-tall 2011 Capitol Christmas Tree. Of course, this was only in response to polls indicating that Christians give Obama his lowest job approval ratings. Turns out that Jesus Christ is conspicuously absent from the Capitol Christmas Tree in the form of any ornaments. The tree is adorned, however, with prominently placed handmade ornaments paying adoring tribute to Obama. When our colleagues at Media Research Center inquired about the lack of Christian ornaments, the Architect of the Capitol office responded, “There may be ornaments like those you describe near the top of the tree, or they could have been obscured or moved due to wind or weather.”

No question there is a lot of “wind” around the White House these days.

For the record, civilian Inspectors General and military JAGs cause a lot of heartburn for millions of government and military personnel, who must constantly check their comments because they will lose jobs or advancements in rank because of any public remark that might be construed to advocate a particular theological viewpoint. However, there is no basis in our authentic Constitution for such stringent expurgation, and that would be the same venerable document that outlines the Liberties both civilian and military government employs pledge to “support and defend.”

Our Founders, the framers of our Declaration of Independence and Constitution, had no such concerns about public expressions of faith, as none was warranted. Conversely, they were bold about promoting Christianity and speaking about their own faith. 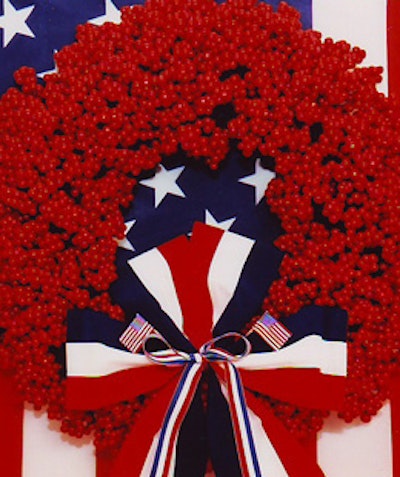 Historian Peter Lillback, author of “Sacred Fire,” an exhaustive scholarly treatise on George Washington, notes that it is only in recent years, with the searchable digital publication of our Founders’ writings, that we get an accurate picture of their faith, and expression of same.

Lillback writes, “Washington referred to himself frequently using the words ‘ardent,’ ‘fervent,’ ‘pious,’ and ‘devout.’ There are over one hundred different prayers composed and written by Washington in his own hand. He described himself as one of the deepest men of faith of his day when he confessed to a clergyman, ‘No Man has a more perfect Reliance on the alwise, and powerful dispensations of the Supreme Being than I have nor thinks his aid more necessary.’ Although he never once used the word ‘Deist’ in his voluminous writings, he often mentioned religion, Christianity, and the Gospel. He spoke of Christ as ‘the divine Author of our blessed religion.’ He wrote of ‘the blessed religion revealed in the Word of God.’ He encouraged seekers to learn ‘the religion of Jesus Christ.’ He even said to his soldiers, ‘To the distinguished Character of Patriot, it should be our highest Glory to add the more distinguished Character of Christian.’”

Believe it or not, Washington did not need to consult pollsters or focus groups, as General or President, before issuing proclamations of faith. He spoke them from his heart, just as most of our Founders did.

Here follows, in alphabetical order, a small sample of how other notable Founders expressed their faith.

Samuel Adams: I [rely] upon the merits of Jesus Christ for a pardon of all my sins. … I conceive we cannot better express ourselves than by humbly supplicating the Supreme Ruler of the world … bringing in the holy and happy period when the kingdoms of our Lord and Savior Jesus Christ may be everywhere established, and the people willingly bow to the scepter of Him who is the Prince of Peace. … We may with one heart and voice humbly implore His gracious and free pardon through Jesus Christ, supplicating His Divine aid … [and] above all to cause the religion of Jesus Christ, in its true spirit, to spread far and wide till the whole earth shall be filled with His glory.

John Hancock: That the spiritual kingdom of our Lord and Savior Jesus Christ may be continually increasing until the whole earth shall be filled with His glory.

Patrick Henry: Being a Christian … is a character which I prize far above all this world has or can boast. … The Bible is a book worth more than all the other books that were ever printed. … This is all the inheritance I can give to my dear family. The religion of Christ can give them one, which will make them rich indeed.

John Jay: Condescend, merciful Father! to grant as far as proper these imperfect petitions, to accept these inadequate thanksgivings, and to pardon whatever of sin hath mingled in them for the sake of Jesus Christ, our blessed Lord and Savior; unto Whom, with Thee, and the blessed Spirit, ever one God, be rendered all honor and glory, now and forever. … The Bible is the best of all books, for it is the word of God and teaches us the way to be happy in this world and in the next. Continue therefore to read it and to regulate your life by its precepts. … Providence has given to our people the choice of their rulers, and it is the duty as well as the privilege and interest of our Christian nation, to select and prefer Christians for their rulers.

Thomas Jefferson: I am a Christian in the only sense in which He wished anyone to be: sincerely attached to His doctrines in preference to all others. … I am a real Christian – that is to say, a disciple of the doctrines of Jesus Christ.

James Madison: I have sometimes thought there could not be a stronger testimony in favor of religion or against temporal enjoyments, even the most rational and manly, than for men who occupy the most honorable and gainful departments and [who] are rising in reputation and wealth, publicly to declare their unsatisfactoriness by becoming fervent advocates in the cause of Christ.

I saved my favorite quote on Christmas for last: “How many observe Christ’s birth-day! How few, his precepts! O! ‘tis easier to keep Holidays than Commandments.” –Benjamin Franklin (1743)

My point in listing these snippets of wisdom from our Founders is to make the case plain that the Left’s proscription on the expression of faith, censorship that is antithetical to the very existence of our Constitution and Liberty, will not cease until such expressions have been expelled from all public venues and forums. Then, and only then, can the rule of men fully supersede the Rule of Law.

Please join our team in prayer for our uniformed Patriot Soldiers, Sailors, Airmen, Marines serving in places far away, and especially for the families enduring their absence, so that we might once again celebrate Christmas as a free people.

As always, on behalf of our staff and National Advisory Committee, I am humbled to stand with you among the ranks of our Patriot countrymen. We wish peace and God’s blessing upon you and your family.

Happy Holy Days and Merry Christ’s Mass! And in keeping with the spirit of this season, remember that attitude is a reflection of gratitude – a grateful heart leads to a joyful spirit!

P.S. If you have not already done so, please take a moment to support our Annual Campaign today by making a contribution – however large or small. If you prefer to support us by mail, please use our printable donor form.

“A government ought to contain in itself every power requisite to the full accomplishment of the objects commmitted to its care, and to the complete execution of the trusts for which it is responsible, free from every other control but a regard to the public good and to the sense of the people.” —Alexander Hamilton (1788)