The Law of Unintended Consequences

“The basis of our political systems is the right of the people to make and to alter their Constitutions of Government. But the Constitution, which at any time exists, ‘till changed by an explicit and authentic act of the whole People, is sacredly obligatory upon all.” –George Washington (1796) 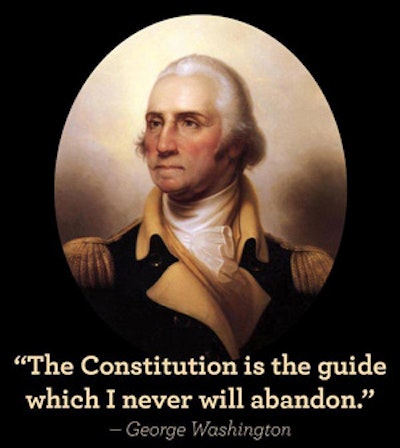 The “law of unintended consequences” is an idiomatic admonition regarding the manipulation of complex systems. The notion of unintentional consequence has its origin with 18th-century political economist Adam Smith and the Scottish Enlightenment.

In the present, it is used more in rebuttal to the hubristic notion that humans are so brilliant and possess sufficient discernment about complex systems that we can predict outcomes with great accuracy. It is similar to Murphy’s Law – “Anything that can go wrong will go wrong” – except it is not asserting the absolute.

20th-century sociologist Robert Merton noted three primary factors contributing to unanticipated consequences: First, incomplete analysis because it is impossible to anticipate all variables; second, errors in analysis of what is known about the problem; third, immediate interests overriding long-term interests.

Our nation is besieged by unintended consequences. Most notably, the 2008 election of a charismatic “community organizer” peddling a “hope and change” mantra. It is now painfully clear, after the re-election of Barack Obama, that his mantra has resulted in a plague of pessimism and an atrocious fundamental transformation of America.

But not all unanticipated consequences are bad.

Shortly after Obama’s first election, a grassroots groundswell of concern over our government’s abject disregard for the Constitution emerged. That concern galvanized in the Tea Party Movement, a broad coalition of Americans from all walks of life with a common goal of restoring Constitutional Rule of Law and the Essential Liberty enshrined therein.

Fortunately, this movement is more ideological than political. While the media labels some constitutional constructionists as “Tea Party candidates,” the underlying movement defies traditional political party labels – and this constitutional coalition is alive and well.

There are two proscriptions for amending our Constitution. These are specified in Article V as ratified.

“The Congress, whenever two thirds of both Houses shall deem it necessary, shall propose Amendments to this Constitution, or, on the Application of the Legislatures of two thirds of the several States, shall call a Convention for proposing Amendments, which, in either Case, shall be valid to all Intents and Purposes, as Part of this Constitution, when ratified by the Legislatures of three fourths of the several States, or by Conventions in three fourths thereof, as the one or the other Mode of Ratification may be proposed by the Congress; Provided that no Amendment which may be made prior to the Year One thousand eight hundred and eight shall in any Manner affect the first and fourth Clauses in the Ninth Section of the first Article; and that no State, without its Consent, shall be deprived of its equal Suffrage in the Senate.” 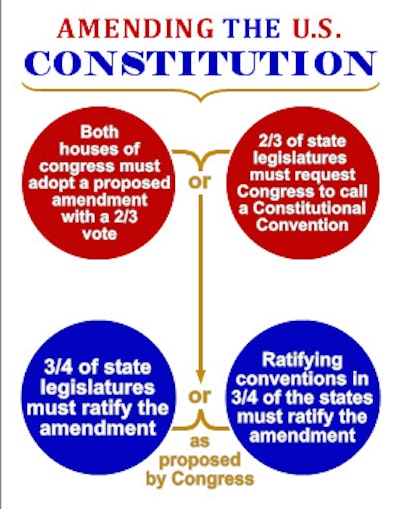 Since our Constitution was ratified and became operational on March 4, 1789, there have been approximately 11,600 amendment proposals, of which 33 were adopted by Congress and sent to the states for ratification. Of those, 26 amendments were ratified by state legislatures and one, the 21st Amendment, which repealed the 18th Amendment (prohibition on alcohol), was ratified by state conventions.

What makes the Michigan request notable is that there already are 12 applications from other states for conventions to consider a Balanced Budget Amendment. All were rescinded – most because it was thought that the Gramm-Rudman-Hollings Act negated the need for a Balanced Budget Amendment. Of course, Congress created as many bypasses around Gramm-Rudman as they have around the Constitution.

But there is a debate as to whether a state may rescind its Article V application. Rep. Duncan Hunter (R-CA) has called on Speaker John Boehner (R-OH) to seek a legal opinion on whether that threshold has been met: “With the decision by Michigan lawmakers, it is important that the House – and those of us who support a Balanced Budget Amendment – determine whether the necessary number of states have acted and what the appropriate role of Congress should be in this case.”

Indeed, that answer is being sought by quite a few constitutional scholars who are advocates of Article V Conventions, including Lawrence Lessig, Sanford Levinson, Larry Sabato, Jonathan Turley and Mark Levin.

Levin, who distributes our Essential Liberty Guides at conservative conferences, has generated substantial interest and support for 11 amendments he outlined in his book, “The Liberty Amendments: Restoring the American Republic.” He is calling for a national dialogue on these amendments, with the ultimate objective of stopping unmitigated and unlawful violations of our Constitution by the central government. 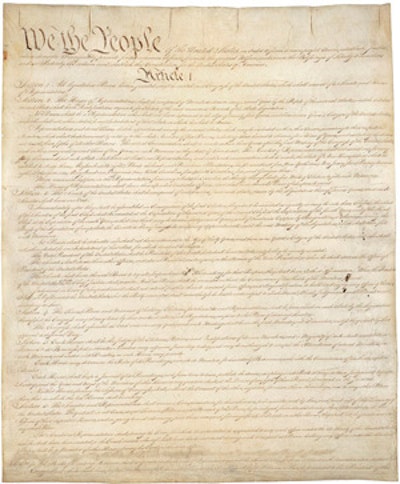 Conservative political analyst George Will is an advocate of another measure, The Compact for America, a Goldwater Institute initiative which, according to Will, “would use the Constitution’s Article V to move the nation back toward the limited government the Constitution’s Framers thought their document guaranteed.”

The Compact is a renewed federal budget containment measure, and as Will concludes, “In the 85th and final of the Federalist Papers written to persuade Americans wary of centralized power to ratify the Constitution, Alexander Hamilton said: 'We may safely rely on the disposition of the state legislatures to erect barriers against the encroachments of the national authority.’ States would be the prime movers of, and would be substantially empowered by, the institute’s amendment-by-compact plan.”

While we await a legal determination from Boehner on the question of whether the 34-state threshold for an Article V Convention has been met, there are two important considerations about which approach should be taken to enact amendments.

First, it is not clear whether the scope of amendments to be considered by a convention, once convened, can be limited. Could those advocating statist tyranny commandeer a convention?

But the delegates to the original Constitutional Convention determined that the Articles were not workable and proposed an entirely new Constitution, in effect discarding the Articles of Confederation without objection from the states. Fortunately, our Framers’ objective was to codify Liberty as “endowed by our creator,” and as specified in our Declaration of Independence.

They believed that all who followed in the executive, legislative and judicial branches of government, and those duly authorized thereunder, would abide by their sacred oaths to Support and Defend“ our Constitution.

According to Alexander Hamilton, ”[T]he present Constitution is the standard to which we are to cling. Under its banners, bona fide must we combat our political foes – rejecting all changes but through the channel itself provides for amendments.“ 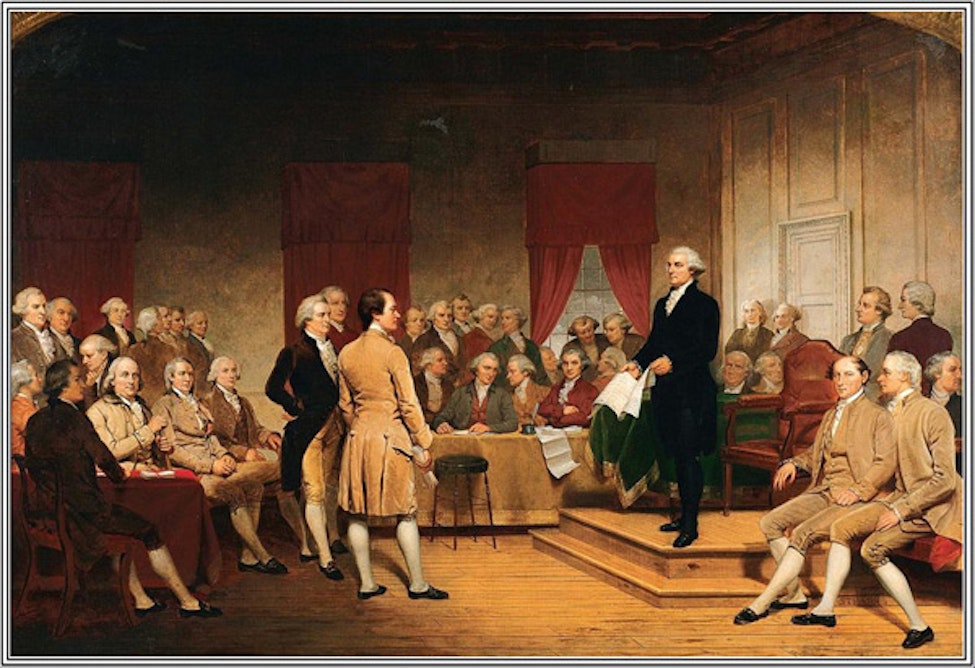 If that legal and moral obligation had been compliantly observed, this column would not even be necessary.

So what is the risk that such lawlessness would hijack an Article V Convention, especially since, as James Madison questioned in his notes on Article V ambiguities, "How was a Convention to be formed? By what rule decide? What the force of its acts?” None of those questions are answered in the Constitution.

Federalist Society constitutional expert Michael Stokes Paulsen, Distinguished University Chair and Professor at St. Thomas School of Law, argues that such a convention would have the “power to propose anything it sees fit.”

My colleague, Heritage Foundation constitutional scholar Matt Spaulding, notes, “The largest question is whether an amendments convention can be limited to specific amendments or even topics. The pro-convention argument assumes that the power to limit the convention is inherent in the power to call the convention in the first place. I’m not so sure that follows: The text says that upon application of the states Congress ‘shall call a Convention for proposing Amendments,’ not for confirming a particular amendment already written, approved, and proposed by state legislatures (which would effectively turn the convention for proposing amendments into a ratifying convention). Indeed, it is not at all clear as a matter of constitutional construction (and doubtful in principle) that the power of two-thirds of the states to issue applications for a convention restricts, supersedes, or overrides the power of all the states assembled in that convention to propose amendments to the Constitution.”

Thus, given the persuasive power of the Leftmedia and Democrat Party conglomerate, their ability to advance populist measures for amendment consideration could spell the end of what remains of our Constitution.

But the second consideration about which of the two approaches should be taken to enact amendments is the overarching question of whether either approach will matter in the end. For as John Adams noted, “We have no government armed with power capable of contending with human passions unbridled by morality and religion… Our Constitution was made only for a moral and religious people. It is wholly inadequate to the government of any other.”

If the executive, legislative and judicial branches of the central government do not abide by existing constitutional constraints, why would anyone believe they would abide by additional constraints in the future?

In either case, caveat emptor.

(Note: In an upcoming column, I will reintroduce a third measure, the establishment of a Constitutional Confederation of the States, to restore constitutional integrity, which affirms the Constitution as ratified, rather than seeks to amend it further.)

“Equal and exact justice to all men, of whatever persuasion, religious or political.” —Thomas Jefferson (1801)