Liberty — Rule of Law Over Rule of Men

“We the People of the United States, in Order to form a more perfect Union, establish Justice, insure domestic Tranquility, provide for the common defence, promote the general Welfare, and secure the Blessings of Liberty to ourselves and our Posterity, do ordain and establish this Constitution for the United States of America. … Done…the seventeenth day of September, in the year of our LORD one thousand seven hundred and eighty seven.” –George Washington and the delegates 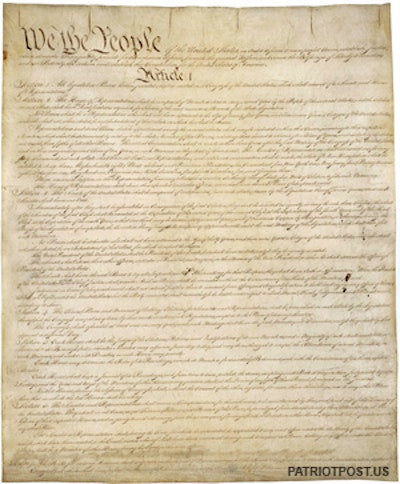 On 17 September, 1787, our Founders enshrined in our nation’s Constitution, the Liberty set forth in our Declaration of Independence. Our forefathers understood that the unalienable Rights of Man as fully and eternally “endowed by their Creator” and set forth in our Constitution, would be tested every day beyond that signing. (Read our Patriot’s Primer on American Liberty.)

Indeed, the Rule of Law embodied in our Constitution will always be under siege by statist regimes, “Democratic Socialists” like Barack Obama and Hillary Clinton, and their Leftist NeoCom cadres (most recently the so-called “antifa movement” of self-proclaimed anti-fascist fascists). These statists seek to replace our Republic’s Constitutional Rule of Law with the rule of men under their diluted “[living constitution](ttps://patriotpost.us/alexander/2970),” the inevitable terminus of the latter is tyranny.

As John Adams made plain in 1775, “They define a republic to be a government of laws, and not of men.”

Much of the burden of insult done to our Constitution by members of the executive, legislative and judicial branches of government, will be shouldered by the next generation, including my children, and as in the path, forthright and steadfast young conservatives in their generation will have to hold the line against tyranny.

Like millions of other American Patriots, especially parents, I am of the same opinion as Thomas Paine on the matter of passing our burden to them: “If there must be trouble, let it be in my day, that my child may have peace.”

A majority of Americans are “progressively” being led astray by an empty promise of “hope and change.” What the nation received instead was a perilous attempt by a small cadre of Leftist elites who have vowed to make good on Barack Obama’s radical commitment to “fundamentally transform the United States of America.”

To arm yourself with the right intellectual ammo to reverse that transformation, I invite you to read any or all of these collected essays outlining the Liberty proclaimed in our Declaration of Independence, and enshrined in our nation’s Constitution. After all, if we are to “secure the Blessings of Liberty to ourselves and our Posterity,” we must first know precisely what it is we’re defending.

Start with our Primer on American Liberty, a brief but comprehensive essay on the history of our legacy of Liberty. (Pocket copies can be purchased for [bulk distribution here](https://patriotpostshop.com/categories/85))

The Unalienable Rights of Man — A Civics Lesson: A concise exposition on the principle that the endowment of Liberty is eternal.

A ‘Living Constitution’ for a Dying Republic: For its first 150 years (with the notable exception Marbury v. Madison in 1803), our Constitution stood as our Founders, and more importantly, “the people,” intended – as is – in accordance with its original intent. In other words, it was interpreted exegetically rather than eisegetically, textually as constructed, not as could be re-interpreted by later generations of jurists.

The First Statement of Conservative Principles: It took the election of a “community organizer” and ideological Socialist, Barack Hussein Obama, to launch a popular resurgence of interest in constitutional Rule of Law and the First Principles upon which our nation was founded, and not a moment too soon.

On American Patriotism: American Patriots will not stand idly by while the last vestiges of Liberty succumb to tyranny. In Jefferson’s words, “Honor, justice, and humanity, forbid us tamely to surrender that freedom which we received from our gallant ancestors, and which our innocent posterity have a right to receive from us. We cannot endure the infamy and guilt of resigning succeeding generations to that wretchedness which inevitably awaits them if we basely entail hereditary bondage on them.”

The Birthright and Inheritance of Freedom: “Let us consider, brethren, we are struggling for our best birthrights and inheritance… Let us disappoint the Men who are raising themselves on the ruin of this Country.” –Samuel Adams

The ‘Tea Party’ Movement: “The people of the U.S. owe their Independence & their liberty, to the wisdom of descrying in the minute tax of 3 pence on tea, the magnitude of the evil comprised in the precedent. Let them exert the same wisdom, in watching against every evil lurking under plausible disguises, and growing up from small beginnings.” –James Madison

When Debating a Liberal, Start With First Principles: Rule Number One: You must define the debate in terms of First Principles, which is to say, you must be able to articulate those principles. “On every question of construction, carry ourselves back to the time when the Constitution was adopted, recollect the spirit manifested in the debates and instead of trying what meaning may be squeezed out of the text or invented against it, conform to the probable one in which it was passed.” –Thomas Jefferson

Tyranny Is Transient — Liberty Is Eternal: In the words of Thomas Paine in 1776, “These are the times that try men’s souls,” but the fact is that at all times in our history, Liberty has been threatened by its antithesis, tyranny – and this will always be true. But the assurance of Liberty is eternal.

The Patriot Declaration: We are American Patriots, defenders of Liberty and First Principles… The Patriot Declaration is not a petition. It is a “Declaration of Cause and Necessity” and stands on its own as a resolution of intent for all who sign it. Just as important, it serves as due notice for those who would abandon their oath to “Support and Defend the Constitution” and abuse their office to the detriment of individual liberty and states’ rights.

Finally, I invite you to observe Constitution Day by visiting The Patriot’s outstanding Historic Documents repository for the complete texts of our nation’s most significant formative documents, and to see our excellent selection of constitutional items at The Patriot Shop.

This week, as our family celebrates the birthday of my firstborn son, we are reminded of the challenges he, his siblings and their peers will face in future generations. We pray that the upcoming midterm election will reflect a great public awakening to the perilous threats to liberty we now face, and foretell a trend to restore the integrity of our Constitution. Let us resolve this Constitution Day to arm and rearm ourselves with the First Principles necessary to defend Liberty.

And I leave you with these words from [Ronald Reagan | http://Reagan2020.US/] from his Sixth State of the Union Address: “Why is the Constitution of the United States so exceptional? Well, the difference is so small that it almost escapes you – but it’s so great it tells you the whole story in just three words: We the people. in the constitutions [of other nations], the government tells the people…what they are allowed to do. In our Constitution, we the people tell the government what it can do and that it can do only those things listed in that document and no others. Virtually every other revolution in history has just exchanged one set of rulers for another set of rulers. Our revolution was the first to say the people are the masters, and government is their servant.”

(On a personal note, in our household, we observe Constitution Day further because it is the date of birth of my eldest son. I suppose there really is no such thing as coincidence, because this young man, like his younger sister and brother, proudly represents the promise of Liberty for the next generation. They are each outspoken advocates for both Liberty and constitutional Rule of Law in their schools and clubs.