The Endowed Rights of Man

“God who gave us life gave us Liberty. Can the liberties of a nation be secure when we have removed a conviction that these liberties are the gift of God? Indeed I tremble for my country when I reflect that God is just, that His justice cannot sleep forever.” –Thomas Jefferson (1774) 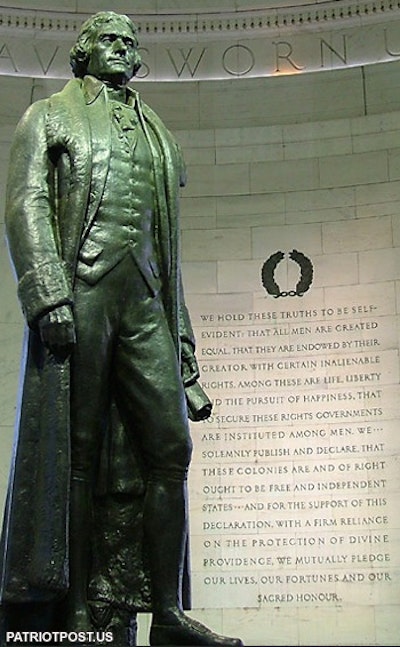 Amid all the contemporary political and cultural contests, too many conservatives fail to make the case for overarching eternal truths – whether in debate with adversaries across the aisles of Congress, or with neighbors across Main Street.

Lost in the din is the foundational endowment of American Liberty, and any debate that does not begin with this eternal truth will end with temporary deceits.

The most oft-cited words from our Declaration of Independence are these: “We hold these truths to be self-evident, that all men are created equal, that they are endowed by their Creator with certain unalienable Rights, that among these are Life, Liberty and the pursuit of Happiness.”

The eternal assertion that Liberty for all people is “endowed by their Creator” and is thus “unalienable” should require no defense, because “we hold these truths to be self-evident,” and because the rights of man are irrevocable from the “Laws of Nature and of Nature’s God.”

The root of all debate between Liberty and tyranny – or, in political parlance, between Right and left – is the contest to assert who endows Liberty – God or man.

The Left’s position has been made plainly evident by Barack Hussein Obama, who has a history of deliberately and repeatedly omitting the words “endowed by their Creator” when citing in open constituent forums the Declaration’s reference to “Rights.” What, exactly, is the inspiration for such overt and explicit omissions by the titular head of the Democratic Party?

Contemporary Leftist protagonists seek to replace Rule of Law with the rule of men. This is because the former is predicated on the principle that Liberty is “endowed by our Creator,” while the latter asserts that government is the giver of Liberty.

The history of man, since its first record, has repeatedly and tragically documented that when the people settle for the assertion that government is the source of their rights, tyranny is the inevitable result. And tyrants always attempt to undermine Liberty by driving a wedge between it and its foundational endowment by our Creator.

Asserting that such endowment is only religious, rather than innate and eternal, generations, American liberals have driven that wedge by asserting that our Constitution provides a “wall of separation” between church and state. But does it?

The short answer is “yes,” but it is most certainly not the faux wall constructed by judicial activists, who have grossly adulterated the plain language of our First Amendment especially during the last 50 years. 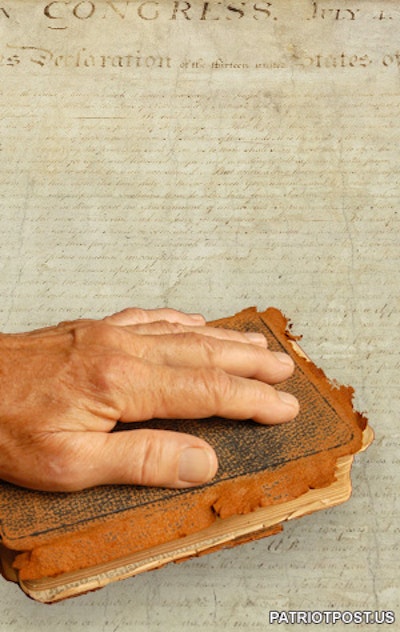 Contrary to what many liberals would have us believe, the words “wall of separation between church and state” do not appear in our Constitution – nor is this notion even implied. Thomas Jefferson penned those words in an obscure 1802 letter to the Danbury Baptist Association in response to concerns about Connecticut’s establishment of Congregationalism as their state church. Jefferson assuaged their concerns, telling the Baptists that the First Amendment prohibited the national government from establishing a “national church,” but he concluded rightly that the Constitution prohibited the national government from interfering with the matters of state governments – a “wall of separation,” if you will, between federal and state governments.

The “wall of separation” argument is thus a phony one. Indeed, it is a blueprint for tyranny.

We are created, from the beginning, in the Image of God, and that image is the essence of Liberty, the well of all rights for all people for all time.

Our enlightened Founders, in their revolutionary opposition to tyranny, looked far beyond kings and parliaments to the enduring source of the rights of man, and they enumerated in our Declaration of Independence that we are, indeed, created in God’s Image for His purpose, and that no man could strip that endowment from the soul of another. Thus, we have the equal capacity to be free, personal, rational, creative and moral beings, and we are entitled to be so through His endowment.

These rights and freedoms were further enshrined in our Constitution.

In 1776, John Hancock wrote of Jacob Duché, the first Chaplain appointed by the Continental Congress, “Congress … from a consideration of your … zealous attachment to the rights of America, appoint(s) you their Chaplain.” Duché, Pastor of Philadelphia’s Christ Church, captured the spirit of the American Revolution, saying, “Civil liberty is as much the gift of God in Christ Jesus … as our spiritual freedom… ‘Standing fast’ in that liberty, wherewith Christ, as the great providential Governor of the world, hath made us free.”

It is in that spirit that we at The Patriot Post adopted our motto, Veritas vos Liberabit – “The Truth Will Set You Free” (John 8:32). That is the essence of the assertion that we are “endowed by our Creator” with life and Liberty. 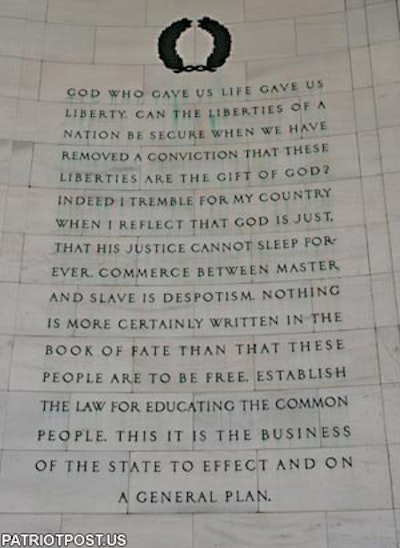 Ignorance of the true and eternal source of the Rights of Man is fertile ground for the Left’s assertion that government endows such rights. It is also perilous ground, soaked with the blood of generations of American Patriots. As Jefferson wrote, “The tree of Liberty must be refreshed from time to time with the blood of patriots and tyrants. It is its natural manure.”

Indeed, the “Cycle of Democracy” demands this tonic. And despite the pervasive assault on Liberty by the current legions of Leftist NeoComs, to paraphrase the great Prussian military historian, theorist and tactician Carl von Clausewitz, “the best defense is a good offense.”

In his 1800 letter to fellow Declaration signer Benjamin Rush, Thomas Jefferson wrote, “I have sworn upon the altar of God eternal hostility against every form of tyranny over the mind of man.”

Like millions of our generation’s American Patriots, I have sworn likewise. We must never forsake our Sacred Honor.

No matter what setbacks we face, Liberty is an eternal endowment. Thus, we must hold the lines on defense, and regroup for relentless attack on offense.

In honor of this, the 237th anniversary of our Declaration of Independence, contemplate these wise words of our Founders, and please consider supporting The Patriot Post‘s mission in defense of Liberty. 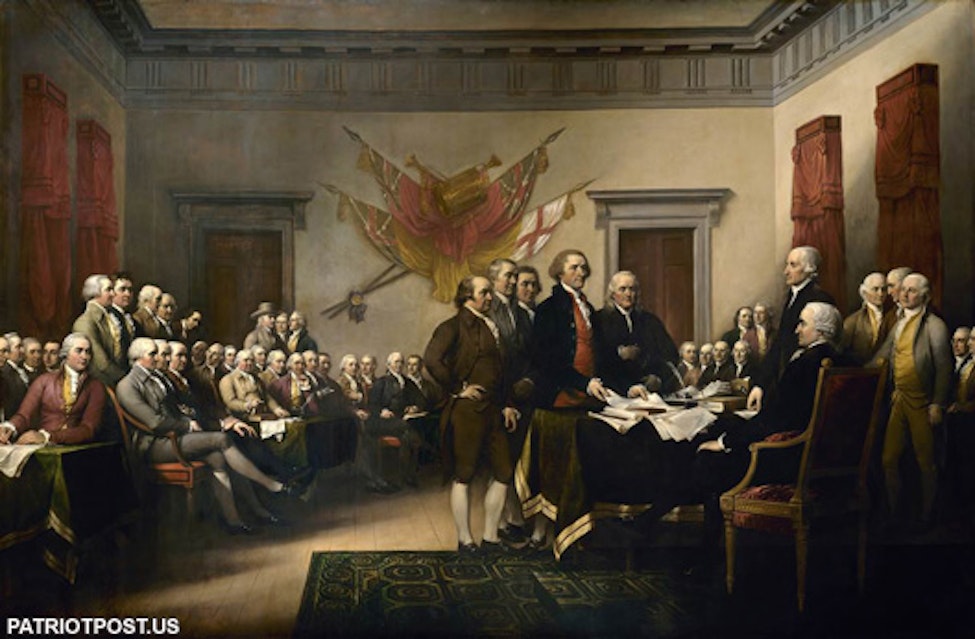 “May every citizen … have a proper sense of the Deity upon his mind and an impression of the declaration recorded in the Bible, 'Him that honoreth Me I will honor, but he that despiseth Me shall be lightly esteemed.’” –Samuel Adams

“This will be the best security for maintaining our liberties. A nation of well-informed men who have been taught to know and prize the rights which God has given them cannot be enslaved. It is in the religion of ignorance that tyranny begins.” –Benjamin Franklin

“The belief in a God All Powerful wise and good, is so essential to the moral order of the world and to the happiness of man, that arguments which enforce it cannot be drawn from too many sources nor adapted with too much solicitude to the different characters and capacities impressed with it.” –James Madison

“The sacred rights of mankind are not to be rummaged for among parchments and musty records. They are written, as with a sunbeam, in the whole volume of human nature, by the Hand of Divinity itself, and can never be erased or obscured by mortal power.” –Alexander Hamilton

“But where says some is the king of America? I’ll tell you Friend, he reigns above, and doth not make havoc of mankind like the Royal Brute of Britain. … [L]et it be brought forth placed on the divine law, the word of God; let a crown be placed thereon, by which the world may know, that so far as we approve of monarchy, that in America THE LAW IS king. For as in absolute governments the king is law, so in free countries the law ought to be king; and there ought to be no other. But lest any ill use should afterwards arise, let the crown at the conclusion of the ceremony be demolished, and scattered among the people whose right it is.” –Thomas Paine in Common Sense

On behalf of our Uniformed Patriots

“Though The Patriot Post does not ask support from military personnel, as a Marine officer, I can’t let your Independence Day campaign pass without telling our families and friends back home how much your words in defense of Liberty encourage our pursuit of Liberty on behalf or our nation. Thank you for all you do to support us and US – Semper Fi!” –Senior Officer, USMC

The Patriot Post is a beacon of Liberty kept bright by the generous support of Patriots nationwide. Please help us to enlist evermore Patriots to our ranks.

If you are able, please support The Patriot Post and its mission today. If you prefer to support us by mail, please send your check with printable donor form.