“The consciousness of having discharged that duty which we owe to our country is superior to all other considerations.” –George Washington

Every week, a challenge I face as publisher of The Patriot Post is determining which subject among all the current news and policy issues concerning Liberty and constitutional integrity should be the subject of my weekly column. I mention this because deep into this week’s treatise and just a few hours ahead of deadline, I received a message from one of our Patriot readers, who offered a far more powerful perspective on where we are as a nation than anything I’d been writing.

That message was from Mike “Smack” McGinn, and began: “Only under the administration of a former ‘community organizer,’ a product of the corrupt Chicago political machine, who never served a day of his life in uniform, could a 20-year retired Marine Corps Officer be prohibited from visiting the Arlington National Cemetery resting place of his father, a 30-year retired Marine Corps Officer with distinguished combat service, on the most hallowed of days for our fallen and deceased military servicemen and women – Memorial Day.”

Col. McGinn was a graduate of the United States Naval Academy’s Class of ‘57.

His USNA yearbook notes, “It was virtually impossible to be in Jim’s presence for more than five minutes without laughing, even if you had just flunked a double-weight Electrical Engineering quiz. He was a farmer turned city boy who loved a party, a good book, and lots of romance, if and when he could separate himself from the arms of Morpheus.”

After graduation, McGinn completed the requisite flight schools and flew the F-8U Crusader out of Marine Corps Air Station El Toro in California. As the war in Vietnam was heating up, then Capt. McGinn transitioned to an aircraft that would move him closer to the action – the UH-1 Huey helicopter gunship. He flew two tours in Vietnam and earned the Distinguished Flying Cross in 1969.

“For heroism and extraordinary achievement in aerial flight while serving as a Pilot with Marine Light Helicopter Squadron 357, Marine Aircraft Group Thirty-Six, First Marine Aircraft Wing in connection with combat operations against the enemy in the Republic of Vietnam. On 6 March 1969, Major McGinn launched as Wingman in a flight of two armed UH-1E helicopters assigned the mission of supporting a flight of twelve helicopters which was to conduct the medical evacuation of casualties and the resupply of a reconnaissance company that was heavily engaged in combat with a large North Vietnamese Army force deep in enemy-controlled territory. Following a briefing in which he was informed that because of inclement weather the friendly unit had not been resupplied for three days, had run out of rations, and was dangerously low on water and ammunition, Major McGinn ignored the extremely adverse weather conditions as he skillfully maneuvered his aircraft below a fifty foot ceiling to locate the embattled company, and then returned to the Vandegrift Combat Base. Escorting the flight to the beleaguered unit, he established an orbit for the flight above the clouds. Undaunted by the heavy volume of hostile fire directed at his helicopter, Major McGinn then led the transport helicopters one at a time into the precarious area, fearlessly maneuvered his gunship on repeated rocket and strafing runs, and delivered his ordnance upon the North Vietnamese Army positions with such devastating effectiveness that the hostile fire was suppressed sufficiently to enable all the supplies to be delivered and all the casualties to be extracted. Before leaving the dangerous area, he boldly delivered his remaining rockets upon an enemy bunker with such pinpoint accuracy that the emplacement was destroyed. Major McGinn’s courage, superior airmanship, and unwavering devotion to duty in the face of great personal danger were instrumental in accomplishing the hazardous mission and were in keeping with the highest traditions of the Marine Corps and the United States Naval Service.”

After serving in Vietnam, Col. McGinn was Commanding Officer of HMA-169 at MCAF Camp Pendleton and flew AH-1 Cobra helicopters. A year later, he became CO of HMM-165 afloat flying CH-46 Sea Knight helicopters. He served additional O-6 billets until his retirement in 1987.

Mike McGinn, like his father before him, is a retired Marine aviator. He flew F/A-18 Hornets from 1988 to 2004, including combat tours over Bosnia and during Operation Iraqi Freedom.

He writes, “Each Memorial Day, we go to visit Dad and pay our respects, driving up from Southern Maryland. This is the first time I’ve been turned away from the Cemetery grounds.”

Mike and his wife Monica left their home early Monday morning, expecting to encounter the usual entry delay into the Cemetery grounds for Memorial Day.

Inching their way through traffic that morning, as they had on previous Memorial Day pilgrimages, Mike and Monica made it to the front of the line at the entrance checkpoint, with an Arlington National Cemetery access pass and a DoD military officer vehicle sticker clearly displayed on his windshield, when they were abruptly waved off and directed to leave the area immediately. Apparently, Barack Obama’s motorcade was en route for the ceremony at the Tomb of the Unknowns and the area was being locked down for security.

The McGinns were not turned away on previous Memorial Days when President George Bush arrived to place a wreath at the Tomb, but a lot has changed in the last year.

For the record, in 1961 while James Arthur McGinn was serving his country, flying Crusaders for the Marine Corps, an unknown woman, Ann Dunham, who had taken up with a Kenyan socialist, Barack Hussein Obama, was giving birth to their son, BHO, Jr., in Honolulu, Hawaii.

As Capt. McGinn was preparing for combat in Vietnam, young Barry O was on his way to Indonesia with his mother and her second husband, Lolo Soetoro.

As Maj. McGinn was earning his DFC, BO was converting to his stepfather’s Islam, even though his mother was an avowed atheist.

As Col. McGinn was completing his Marine billets, BO was attending Occidental College and then Columbia University; a period of Obama’s life that to this day remains shrouded in mystery and devoid of college transcripts. 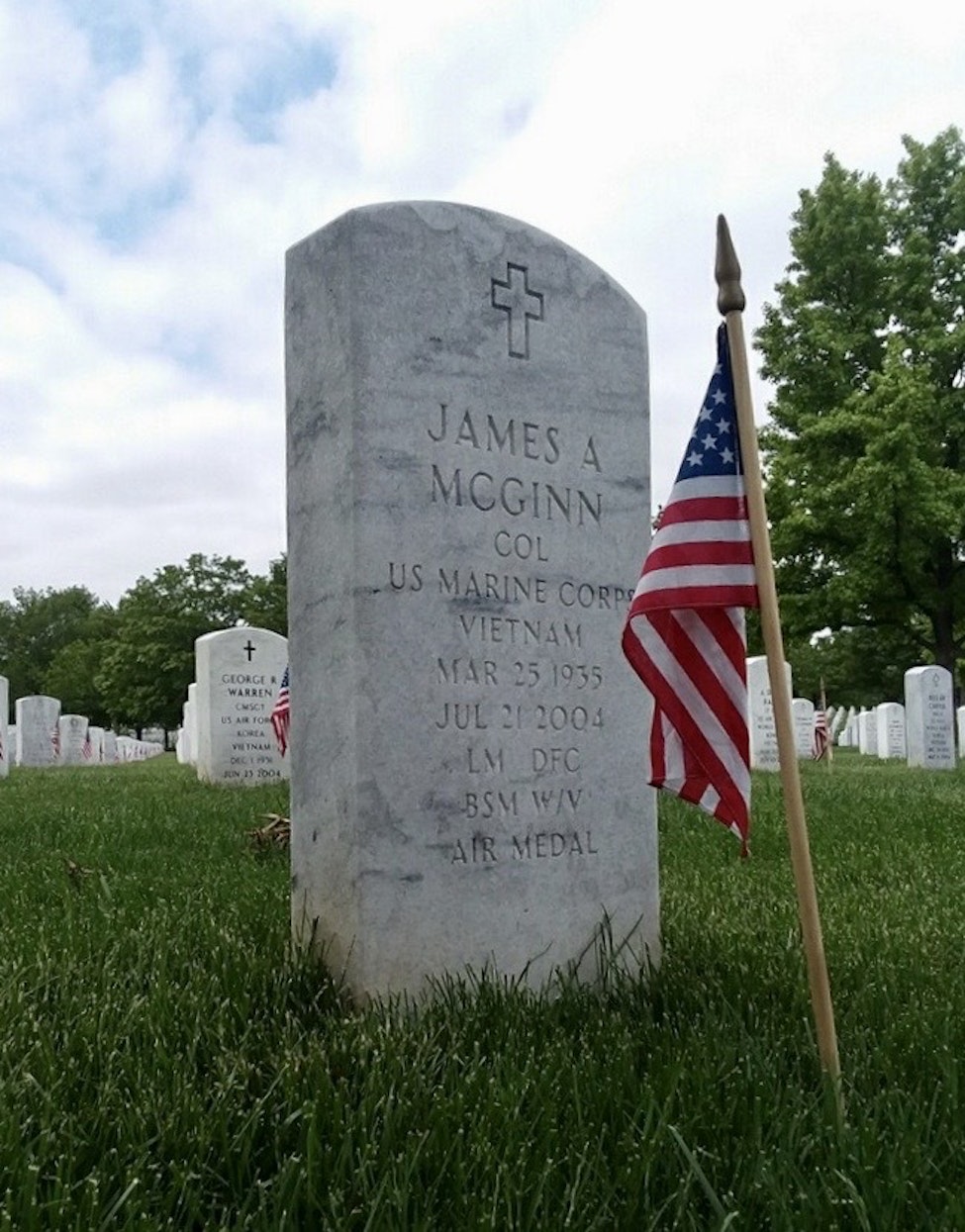 In 1994, as Mike McGinn was launching in his F/A-18 for combat tours over Bosnia, Obama was in Chicago, being mentored by an Afrocentric racist Jeremiah Wright, and Marxist Weather Underground terrorists William Ayers and Bernardine Dohrn among others, who were, in turn, launching BO’s political career.

In 2003, when Mike was flying missions over Iraq, the “community organizer” was on a mission to be elected to the U.S. Senate with the help of John Kerry and other treasonous Leftists. The rest is, as they say, history…

Fast forward to this week, as combat veteran Mike McGinn was in line to visit the gravesite of his heroic father, and is turned away because a leftist wastrel community organizer, who duped the American electorate, was having lanes cleared for his presidential motorcade, so he could go through the motions of a memorial wreath placement at Arlington – despite his loathing of military service members.

This incident is a tragic metaphor, if you will, for the state of our nation under the “leadership” of a man who has no honor, and who is an avowed enemy of Liberty and its most ardent Patriot defenders – those who uphold their oaths “to support and defend the Constitution,” not undermine it.

The current circumstances notwithstanding, let me say to both James and Mike McGinn, and their families, on behalf of your fellow Patriots across this grateful nation, Fideli Certa Merces – “to the faithful there is certain reward,” as noted on all Marine Honorable Discharge orders.

May the “consciousness of having discharged that duty” be and remain, “superior to all other considerations.”

Of Border Apprehensions and Overnight Flights