A ‘Gay Parody’ of Marine Sacrifice

The Desecration of the USMC War Memorial

“Every thing useful and beneficial to man, seems to be connected with obedience to the laws of his nature, the inclinations, the duties, and the happiness of individuals, resolve themselves into customs and habits, favourable, in the highest degree, to society. In no case is this more apparent, than in the customs of nations respecting marriage.” –Samuel Williams (1794) 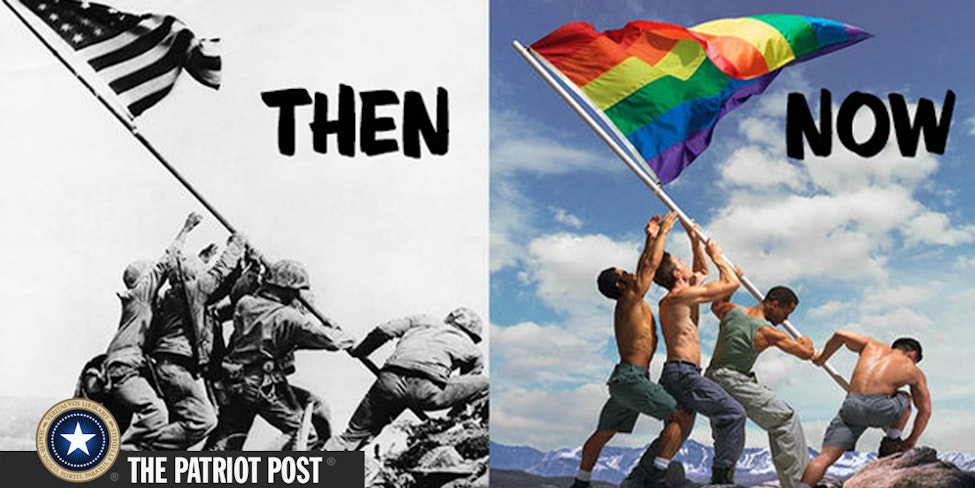 “By their victory, the 3rd, 4th and 5th Marine Divisions and other units of the Fifth Amphibious Corps have made an accounting to their country which only history will be able to value fully. Among the Americans serving on Iwo island, uncommon valor was a common virtue.” —Admiral Chester Nimitz

“Holland, the raising of that flag on Suribachi means a Marine Corps for the next five hundred years.” —Secretary of the Navy James Forrestal to General Holland Smith on the Iwo beach below

Last week, I visited the Museum of the Marine Corps in Quantico, Virginia.

Among a plethora of remarkable artifacts from Marine operations dating back to the Corps’ founding on 10 November 1775 is the World War II American flag that was raised above Iwo Jima’s Mount Suribachi 70 years ago. I was amazed by this particular display, as I did not know the Iwo flag, and the smaller one that preceded it, had been recovered and archived.

It was a privilege to stand before that American flag with my son, who had just graduated from Officer Candidates School at MCB Quantico — the “Crossroads of the Marine Corps.” We didn’t say much. Instead, we quietly contemplated the price of Liberty won under that Star-Spangled Banner. It seemed a fitting way to prepare for an Independence Day celebration. 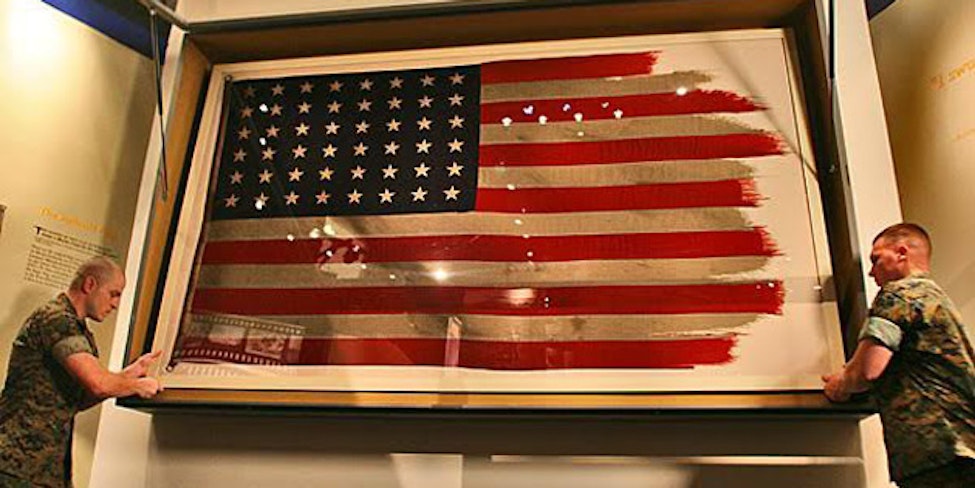 While the sacrifices represented within that hallowed museum were overwhelming, we were both humbled and awestruck by the flag exhibit because its docent narrator was an 89-year-old veteran of the Iwo Jima assault, Private First Class Frank Matthews, 2d Battalion, 24th Regiment, 4th Division, USMC.

The Marine invasion of Iwo Jima, known as “Operation Detachment,” began on February 19, 1945, and continued through March 27. Taking Iwo Jima, the first of the Japanese home islands, was critical to our success in the Pacific, as it would eliminate enemy airfields there and provide the U.S. with airfields for cover during the planned invasion of Japan.

That tiny volcanic island, about one-third the size of Manhattan, was heavily fortified by a nation that well knew its strategic significance. Iwo Jima, whose name means “Sulfur Island,” contained approximately 18,000 warriors of the Imperial Japanese Army, who built a vast network of bunkers, concealed artillery and a 12-mile network of cave tunnels. Our invading force comprised 70,000 Marines. The 36-day assault resulted in more than 20,000 American casualties, including 6,800 dead. Nearly every Japanese fighter was killed. Only 216 were taken prisoner.

Think about those numbers for a moment.

Iwo Jima marked the beginning of the end of the Pacific War, which culminated in the battle of Okinawa (which lasted 82 days and resulted in more than 10,000 dead) and the atom bombings of Hiroshima and Nagasaki.

Our narrator, then just 18 years old, spent 28 days in combat on Iwo, and his mission was, as he states, “to kill Japanese.” He landed on Iwo the second day of battle and fought his way north. “That was the only time in my life I’ve ever been involved in hand-to-hand combat. I was a skinny kid from North Carolina.”

He recounted the brutal beach landings — more than 2,400 Marines died on the first day alone.

He told the story behind a large exhibit photo of himself entitled “Flame Warfare,” in which he is using an M2 flamethrower. He notes that on the tenth day of the battle his gunnery sergeant instructed him to pick up a flamethrower from a fellow Marine who had just been killed by a sniper. “I was more afraid of that gunny than I was of the Japanese, so I put it on,” said Frank. “I hated the thing. It weighed 83 pounds. I weighed about 150.” 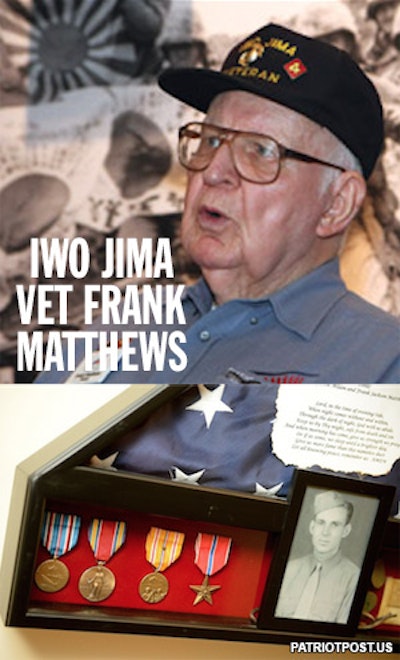 Asked by a young person if he was afraid, Frank responded, “I was afraid alright, but I was afraid I was going to do something stupid. I didn’t have time to be afraid of anything else.”

He was pleased to point out something that few people know — among the major ships at Iwo, the Nevada, the Tennessee and the West Virginia, all three had been sunk at Pearl Harbor. Each was re-floated, refitted and put back into action. The Nevada even went to the Atlantic for the Normandy invasion before returning to the Pacific for the Iwo Jima invasion.

Frank was wounded three times in his 28 days of relentless combat. And he notes solemnly that, after the battle concluded, “There should have been 36 men in my platoon. There was only one. And you’re looking at him.”

Honoring the valor of his fellow Marines, Mr. Matthews now spends about 20 hours each week narrating the events of Iwo Jima for visitors. I have known more than a few veterans of Iwo Jima, but I will never forget hearing from this one, standing before that Mt. Suribachi flag.

The iconic photograph, “Raising the Flag on Iwo Jima,” was taken on February 23, 1945, four days into the battle, by Joe Rosenthal. Ironically, Rosenthal had been rejected by the Army because of his poor eyesight, but joined the Associated Press and traveled to the Pacific as a war correspondent.

Rosenthal, who was only 5’ 5", stood on a sandbag and a pile of stones just in time to catch the flag being raised by five Marines (Ira Hayes, Michael Strank, René Gagnon, Harlon Block and Franklin Sousley) and a Navy corpsman (John Bradley). Despite the awesome triumph that this moment captured, there was much more fighting and dying to be done on Iwo Jima. In the days ahead, three of those Marines — Strank, Block and Sousley — were killed in combat.

Rosenthal’s photo is the basis for the United States Marine Corps War Memorial monument at Arlington National Cemetery. Inscribed on the front (west) side of the Memorial are the words of Admiral Nimitz, “Uncommon Valor Was A Common Virtue,” and “Semper Fidelis.” On the east side, the inscription reads, “In Honor And Memory Of The Men Of The United States Marine Corps Who Have Given Their Lives To Their Country Since 10 November 1775.”

Inspired by Frank Matthews’ recounting of the grueling battle, on the afternoon of our visit, I took some time to research and review my knowledge of the Iwo Jima campaign.

Searching for information, the first and most recent listing was a report in The Washington Post about the controversy over a “parody” photograph of that flag raising, featuring a group of homosexuals raising the so-called “gay pride” flag on a hilltop — a deeply offensive photo taken some years ago by Ed Freeman for the cover of a homosexual advocacy magazine.

After the June 26 Supreme Court decision striking down state prohibitions against same-sex marriage, Freeman wrote with great pride, “When I took this picture almost ten years ago, it never, never occurred to me that it would someday come to symbolize the victory we are celebrating today. Congratulations to all of us! Love to you all.”

But the re-circulation of this photo, inspired by Barack Obama’s rainbow White House and all the other rainbow nonsense, has resulted in a significant protest from Marine vets and Patriots from all walks of life. 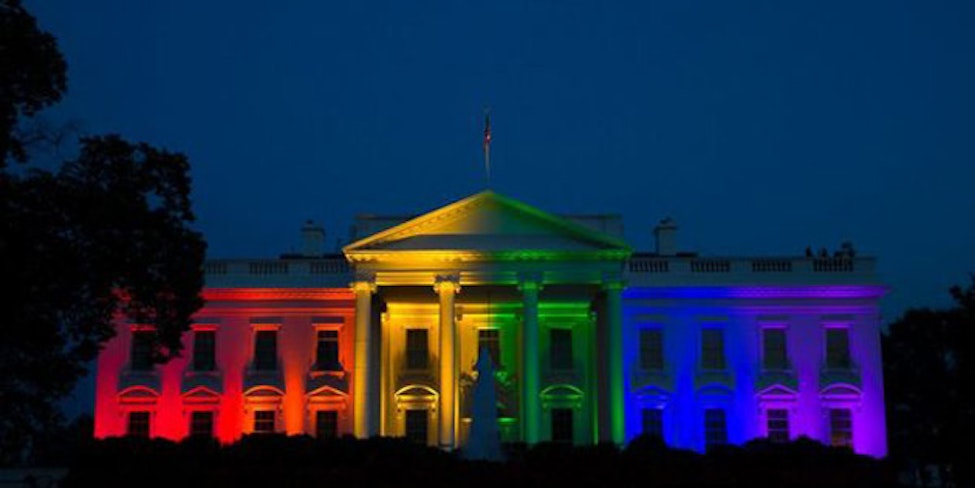 Now, according to Freeman, who is selling the image, “The principle complaint that people have is that I am equating the gay struggle with the contribution and sacrifice of American servicemen. … For God’s sake, no. I totally support people in uniform. There is no comparison going on here.”

I really have no words to express the guttural anger this image stirred in my soul after visiting with Frank Matthews just hours before being visually assaulted by Freeman’s image. (Any words I might express would fail to make it through your email filters.) Of course, no words are really needed.

A picture may be worth a thousand words, but the Rosenthal and Freeman photos side by side speak a million words about the contrast between American Patriots and “gay culture.”

In all fairness, I should note here that among those highly offended by the photograph in question are some in the “same-sex” camp. Despite our differences on notable cultural and faith issues, I have several “gay” friends who contacted me to express their outrage after the images made headlines.

One of them summed it up best: “I don’t think the White House should be used as a f—ing rainbow billboard for gay rights, and I am indignant over this ‘parody’ photograph. I hoped you would not see it as I know your devotion to God, country and family would be deeply offended. I, too, am indignant. My uncle was a Marine Corps officer who served at Guadalcanal and Okinawa. Were he alive to see the so-called gay version of the Iwo Jima photograph, I’d be sore ashamed. Gays, lesbians and assorted others take the bait of anything that comes our way if it’s sprayed with a rainbow. I’m embarrassed. The raising of that flag is etched into our collective American soul, embodying the toil, bravery and sacrifice required to preserve freedom, something to which we were once committed at all costs. Some things are sacred and you don’t mess with them. Let us all raise the flag of the United States of America.”

On this, we can certainly agree. Semper Fi. 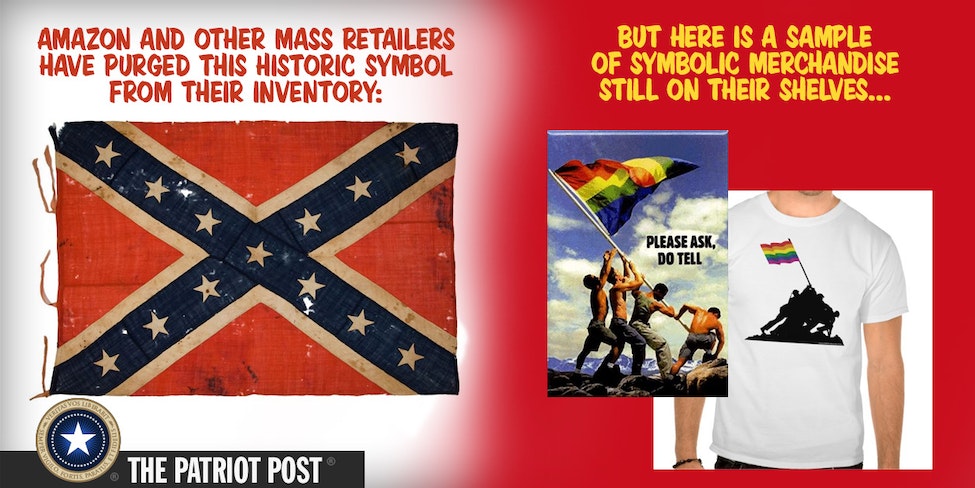