The Birthright and Inheritance of Freedom

“Let us consider, brethren, we are struggling for our best birthrights and inheritance… Let us disappoint the Men who are raising themselves on the ruin of this Country.” –Samuel Adams (1772) 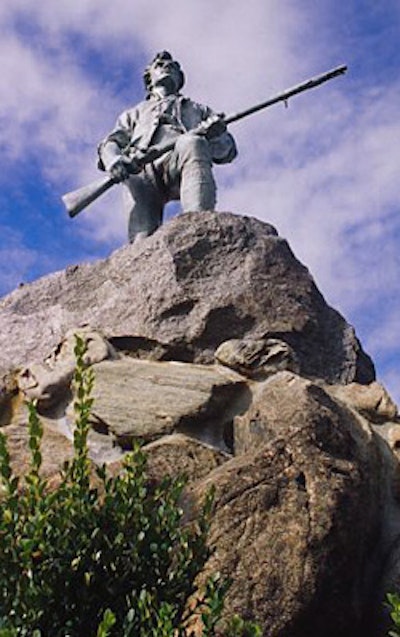 A year ago, the election of Barack Hussein Obama was an egregious affront to our national legacy and a clarion call to action for many good citizens who honor the rights and obligations of liberty.

In November 2008, it was difficult to accept that a majority of our countrymen had fallen into such a stupor that they could be lulled by the dullard droll of “hope ‘n’ change”; that they could be conned into electing an inexperienced charlatan, an unapologetic socialist, to the office of president.

At the time, Obama’s politically moderate supporters scoffed at the charges of socialism, but unlike Bill Clinton, who ran to the center after being elected, Obama has run as fast and far to the left as possible, just short of publicly declaring our Constitution null and void.

Too many Americans have been complacent about liberty, believing it to be their birthright and the birthright of generations to come. They have enjoyed the fruit of liberty defended by others, taking rights for granted and knowing nothing of the obligations for maintaining that blessing. Most Americans have never had to fight for liberty and, thus, have little concept of its value or any sense of gratitude for its accumulated cost – a cost paid by generations of Patriots who have pledged their Lives, their Fortunes and their Sacred Honor.

I encourage you to take heart, though, because change is coming, and not the variety proffered by Obama and his ilk.

There is a groundswell of conservative activism rising up across our great nation, as citizens are awakening to this ominous threat of constitutional adulteration and tyranny. Citizens are speaking out for liberty at public forums, attending grassroots “Tea Parties,” making a stand for Liberty.

The first real political results of that uprising were manifest in the elections of Bob McDonnell and Chris Christie to the executive branches of the states of Virginia and New Jersey, respectively. Each of these men vanquished a Democrat opponent for whom Barack Obama had extensively campaigned, and each had done so in a state that Obama had easily carried a year earlier. McDonnell’s 18-point victory in Virginia, for example, represented a 25-point turnabout from Obama’s 7-point margin in 2008.

Even the loss in New York’s 23rd Congressional District, which pitted Doug Hoffman against Democrat Bill Owens, was heartening. Despite Leftist “Republican” Dede Scozzafava withdrawing from the race and endorsing Democrat Owens rather than Hoffman, despite Democrats and the misguided Republican “leadership” spending more than $2 million against him, Hoffman (“C” for Conservative Party) almost won. Owens took 48 percent to Hoffman’s 46 percent, with Scozzafava, whose name was still on the ballot, receiving 6 percent.

The restoration of constitutional Rule of Law is on the horizon, but it will reach landfall only if our growing tide of conservative voices makes it so. We cannot undo generations of civic negligence in one or two election cycles, but we can, no, we must halt this downward spiral, and the crisis we find ourselves in now presents a great opportunity for the future.

The burden of bearing the flame of liberty has always fallen upon an “irate, tireless minority.”

If there is one thing that distinguishes you, as a Patriot Post reader, from the majority of Americans, it is the spirit and character that you share with hundreds of thousands of other Patriot readers, who are heartened by the awesome power that has emboldened Patriots from the dawn of our nation, who understood that an irate, tireless minority, keen on setting brushfires of freedom in the minds of men, will prevail.

Thank you for your strength, preparedness, vigilance and faithfulness.

Like many of you, I have devoted my entire adult life to the mission of ensuring individual liberty, restoring constitutional limits on government, and to promoting free enterprise, a strong national defense and traditional American values.

I have raised my hand seven times in the service of our nation, affirming and reaffirming my oath to “support and defend” our Constitution.

For the last 14 years, I have had the great privilege of working with an extremely talented and dedicated group of editors and staff in our publishing office and around the nation. Together, we have taken The Patriot Post from its humble beginnings to the most highly acclaimed “voice of constitutional conservatism” on the Internet.

Since 1996, The Patriot has been on the frontlines of the battle to restore constitutional limits on government and the judiciary – and millions of Patriots have joined our ranks in the last decade. Please note that we don’t just “preach to the choir.” Though our primary mission has been to provide grassroots leaders across the country with the proper constitutional construct for tackling critics on the Left, we now reach a much broader audience.

Because The Patriot is distributed without charge, our message of liberty is reprinted, forwarded and reposted by hundreds of thousands of our subscribers so that it is available to millions of others.

While we have now won several skirmishes, there are formidable battles ahead, and we must redouble our preparations for the oncoming fight.

Now, those who know me personally, as you might surmise, would not describe me as being “touchy-feely.” (In fact, when I hear the jingle “reach out and touch someone,” I start by estimating windage and elevation … but I digress.)

That notwithstanding, I do in fact care a great deal about the welfare of our editors and staff, and their families.

For that reason, I ask that you take a moment and consider their dedication and sacrifice.

From very early mornings, to very late nights, to working vacations and weekends, they work tirelessly and sacrifice much to research, write, compile and edit every issue, all under tight deadlines.

And, for their valiant efforts, your Patriot staff receives only modest compensation for their relentless pursuit of our mission, and they rely upon your generosity to help us provide our product, free of charge, to countless thousands of our military, collegiate, political and mission field readers.

So, it is with the urgency of our times and devotion for our staff that I announce our Annual Campaign is under way.

If you have not already done so, I humbly request that you take a moment to support The Patriot online today by making a contribution – however large or small. (If you prefer to support us by mail, please use our Printable Donor Support Form or print the donor guide below.)

As long-time Patriot readers know, we don’t dwell in a shiny office building at a fashionable address inside the DC Beltway, nor are we sustained by any political, special interest or parent organization. We do not assault your senses with online or e-mail third-party advertising. Our mission and operations are funded by – and depend entirely upon – the voluntary financial support of American Patriots like YOU.

As always, I thank you for the honor and privilege of serving you as editor and publisher of The Patriot. We are humbled to count you among our readers. On behalf of our National Advisory Committee and staff, thank you and may God bless you and your family!

(Note: You can view our expense allocations here) Once your donation has been recorded, your e-mail address is removed from our appeal and update lists. However, when the year-end campaign is complete, we will send you a report.)