National Security — Beyond the Mattis Memes

Allies respect Gen. Mattis for his fearless courage, and adversaries fear him for the same reason.

“National defense is one of the cardinal duties of a statesman.” —John Adams (1815) 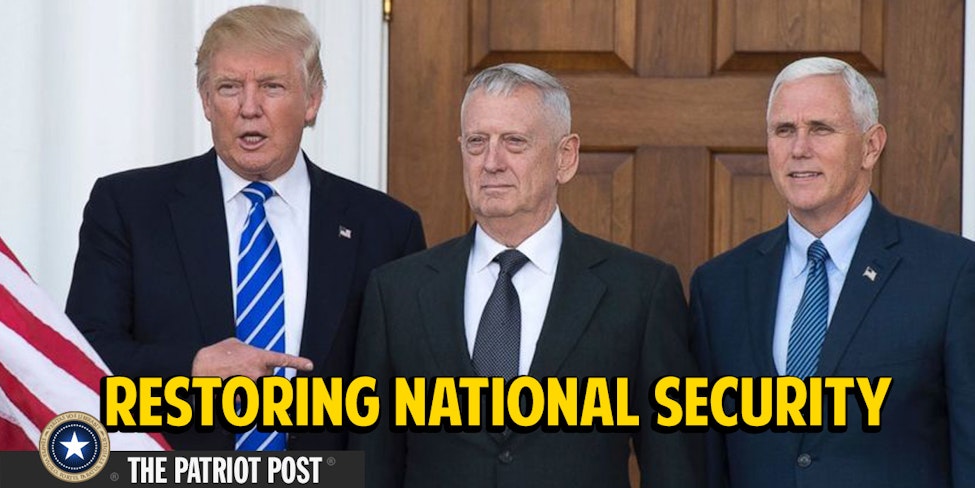 In 1790, George Washington outlined in his first annual message to the nation his maxim of peace through superior firepower: “To be prepared for war, is one of the most effectual means of preserving peace.”

The “peace through strength” principle was cyclically borne out over the 200 years between Washington and Ronald Reagan. As President Reagan said famously, “‘Deterrence’ means simply this: making sure any adversary who thinks about attacking the United States, or our allies, or our vital interests, concludes that the risks to him outweigh any potential gains. Once he understands that, he won’t attack. We maintain the peace through our strength; weakness only invites aggression.”

But our restored strength after the Jimmy Carter fiasco was squandered by Bill Clinton, who ignored the growing Islamist threat and repeatedly failed to neutralize Osama bin Laden.

Again, cyclically, after the catastrophic 9/11 attack on our nation, President George W. Bush endeavored to rebuild our military might in order to prosecute Operation Enduring Freedom and Operation Iraqi Freedom, and to win a hard-fought military victory in Iraq.

But no sooner had Bush left office than Barack Obama and his secretary of state, Hillary Clinton, maliciously began to undermine our standing in the world — so much so that our nation’s security is, once again, at great risk.

Enter President-elect Donald Trump, who announced last week that he would nominate Gen. James Mattis as secretary of defense, a formidable military leader.

Putting the Pentagon under the charge of a man nicknamed “Mad Dog” (which he hates) puts the worldwide enemies of Liberty on notice.

Our allies respect James Mattis for his fearless courage and character, and our adversaries fear him for the same reason.

Gen. Mattis served until March 2013 as the 11th commander of U.S. CentCom, when Barack Obama forced him into early retirement. After 41 years in Marine leadership, Gen. Mattis was not willing to play along with Obama’s political retreat from Iraq, which was directly responsible for the rise of the Islamic State and the humanitarian crisis that followed.

After his retirement ceremony, Mattis planned a cross-country drive back to his home state of Washington, but, according to his colleague, MajGen. Michael Ennis, “The route he chose was dictated by the Gold Star Mothers he had to visit along the way … zig-zagging to get to as many as he could to personally talk to them. He personally wrote hand-written notes to every parent whose son or daughter was killed under his command.”

Reflecting on Obama’s retreat from prosecuting ISIL, in 2014 Gen. Mattis testified, “You just don’t take anything off the table up front, which it appears the administration has tried to do. Specifically, if this threat to our nation is determined to be as significant as I believe it is, we may not wish to reassure our enemies in advance that they will not see American ‘boots on the ground.’ If a brigade of our paratroopers or a battalion landing team of our Marines would strengthen our allies at a key juncture and create havoc [and] humiliation for our adversaries, then we should do what is necessary with our forces that exist for that very purpose. We have the most skilled, fierce and certainly the most ethical ground forces in the world and I don’t think we should reassure the enemy in advance that they will never face him.” 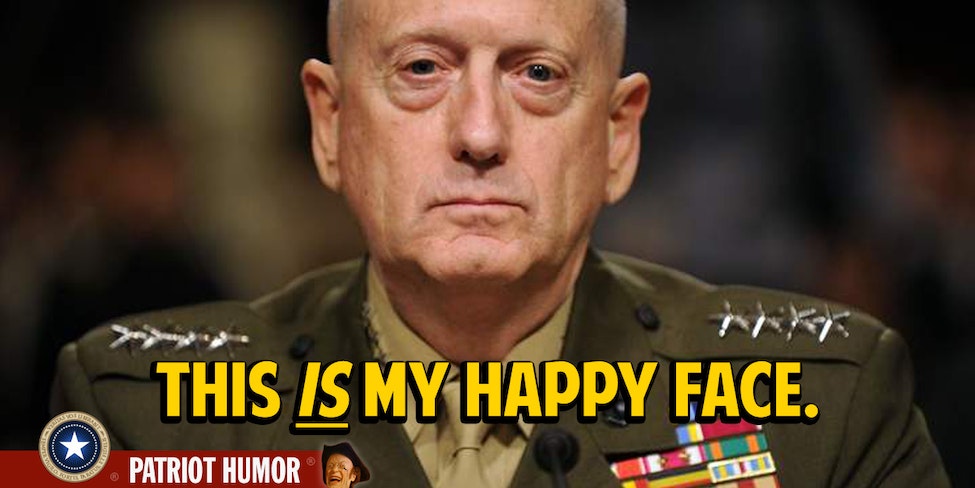 He was much too kind… The incoming administration faces what all incoming Republican administrations have faced in the last century after Democrats depart: Foreign policy FUBAR!

I have never met Jim Mattis, but several of our National Advisory Board military members have served beside him in senior military billets. They describe Mattis as a modern-day George Patton, but without all the warm fuzzies!

They concur with the Marine Corps Times’ assessment that Mattis is the “most revered Marine in a generation,” deserving of a place alongside legendary Leathernecks such as LtGen. Lewis B. “Chesty” Puller and LtGen. John A. Lejeune.

James Mattis is known as a student of history. In this respect, he’s similar to his World War II Army predecessor, Gen. George “Old Blood and Guts” Patton, who was also a prolific reader — particularly of his enemy’s writings. Mattis has a personal library that exceeds 7,000 volumes and is known as the “Warrior Monk” both for his intellect and for being a lifelong bachelor.

He has a long history of publishing required reading lists for his Marines, subjecting them to his personal standards of intellectual rigor and aptitude. He believes as he has often preached, “The most important six inches on the battlefield is between your ears.”

(You can read Gen. Mattis’ views on developing warrior intelligence, ponder some of his more memorable quotes and listen to a few of his lectures on The Patriot Post’s Mattis page.)

His decades-long career is rich with anecdotes, but in this season I’ll reflect on one in particular that exemplifies his care for those under his command.

As told by retired Gen. Charles Krulak, who was the Marine Corps Commandant at the time, on Christmas Day 1998 then-BGen. Mattis stood duty for a young Marine officer so he could spend the day with his family.

It is not unusual for senior Marine officers to relieve junior officers from Christmas duty posts, but when told by one General officer about another, it is worth retelling.

Every year, Gen. Krulak and his wife baked countless cookies in the days ahead of Christmas, put them in little packages and, beginning at 0400 on Christmas Day, he would deliver cookies to all the Marine duty posts around Washington.

Making his final delivery of the day, Gen. Krulak asked the Marine Lance Corporal on duty who the officer of the day was.

Normally, of course, the officer of the day would’ve been a junior officer, not a general officer.

According to Krulak, he replied to the Corporal, “No, I know who Gen. Mattis is. I mean, who’s the officer of the day?”

“I looked around the duty hut. In the back there were two cots: One for the officer of the day and one for the enlisted Marine. I said, ‘OK, who was the officer who slept on that cot last night?’”

No sooner had the question been answered a third time than BGen. Mattis entered the room.

Krulak recalls, “So I said to him, ‘Jim, what are you standing the duty for?’ And he said, ‘Sir, I looked at the duty roster for today and there was a young major who had it, who is married with a family. I’m a bachelor and I thought, "Why should the major miss out on the fun of having Christmas with his family?” And so I took the duty for him.’“

Krulak concluded, "It says volumes about Jim Mattis and his leadership style. He did it very unobtrusively. He just took the duty.”

Indeed it does, and the same could be said for most Marine officers.

Because of his recent release from uniformed service, Gen. Mattis will require House and Senate waivers for the seven-year moratorium on military officers taking a civilian appointment at the Pentagon. GOP leaders have proposed a stopgap spending bill including a bypass for the Mattis waiver. Even if that fails, it’s unlikely the waiver will be an issue given the high esteem in which he is held with most on Capitol Hill.

However, expect to hear objections from a few braying congressional cupcakes who think some of his “Mattisisms” are insensitive. 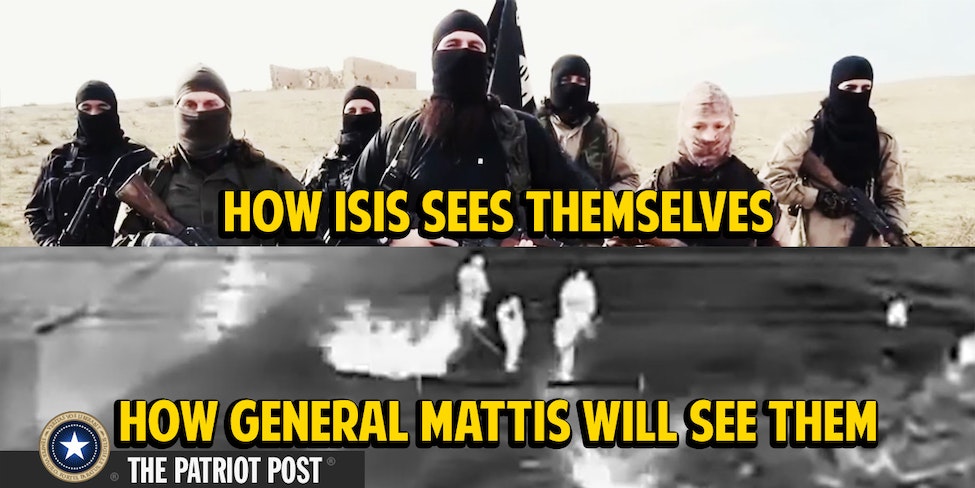 Frankly, I find his remarks to be very sensitive — to the support and defense of our Constitution and Liberty.

“Find the enemy that wants to end this experiment [in American democracy] and kill every one of them until they’re so sick of the killing that they leave us and our freedoms intact.”

“You go into Afghanistan, you got guys who slap women around for five years because they didn’t wear a veil. You know, guys like that ain’t got no manhood left anyway. So it’s a hell of a lot of fun to shoot them.”

“Be polite. Be professional. But have a plan to kill everybody you meet.”

“The first time you blow someone away is not an insignificant event. That said, there are some a—holes in the world that just need to be shot.”

“I come in peace. I didn’t bring artillery. But I’m pleading with you, with tears in my eyes: If you f—k with me, I’ll kill you all.”

“We’ve backed off in good faith to try and give you a chance to straighten this problem out. But I am going to beg with you for a minute. I’m going to plead with you, do not cross us. Because if you do, the survivors will write about what we do here for 10,000 years.”

Footnote: Patriots, while our annual budget is a drop in the bucket compared to the big Beltway organizations, our outreach certainly is not. We have increased the scope of our mission and operations every year without increasing our budget. Today, countless grassroots and grasstops conservatives rely on The Patriot Post as a steadfast touchstone for Liberty, and we remain the most cost-effective conservative force multiplier on the Web.

We have launched our year-end sustaining fund campaign. Please help us extend Liberty to the next generation of American Patriots.