Far more parents are permanently separated from their children after being murdered by illegal immigrants.

In the final presidential debate last week, among the many lies Joe Biden regurgitated was a whopper about the Trump administration separating 545 children from parents at the border. According to Biden, “Their kids were ripped from their ams and separated and now they cannot find over 500 sets of those parents and those kids are alone. Nowhere to go. Nowhere to go. It’s criminal.”

That spurious claim set millions of emotionally incontinent leftist heads on fire. What is “criminal” is that many of those children (18 and younger) were brought here by human traffickers — the same “coyotes” who are funneling children into sex-trafficking rings.

The fact is, 485 parents have been located, and ZERO want to be repatriated with their children in their home countries.

And on the “separation” claim, President Donald Trump would have done well to respond to Biden that far more parents are permanently separated from their children after being murdered by illegal immigrants.

The day before the presidential debate, a black Houston police commander, Harold Preston, was murdered by an illegal immigrant, Rolando Manzano-Martinez, who had a long list of prior convictions, including felony convictions for carrying a firearm and assault charges. Responding to a call for help, Sgt. Preston and his partner, Officer Courtney Waller, were both shot while attempting to protect the wife and son of Manzano-Martinez. Waller survived.

Sgt. Preston was just weeks from his retirement, and he is now permanently separated from his family, his community, and his brothers and sisters in blue. Democrats didn’t take a knee for him. 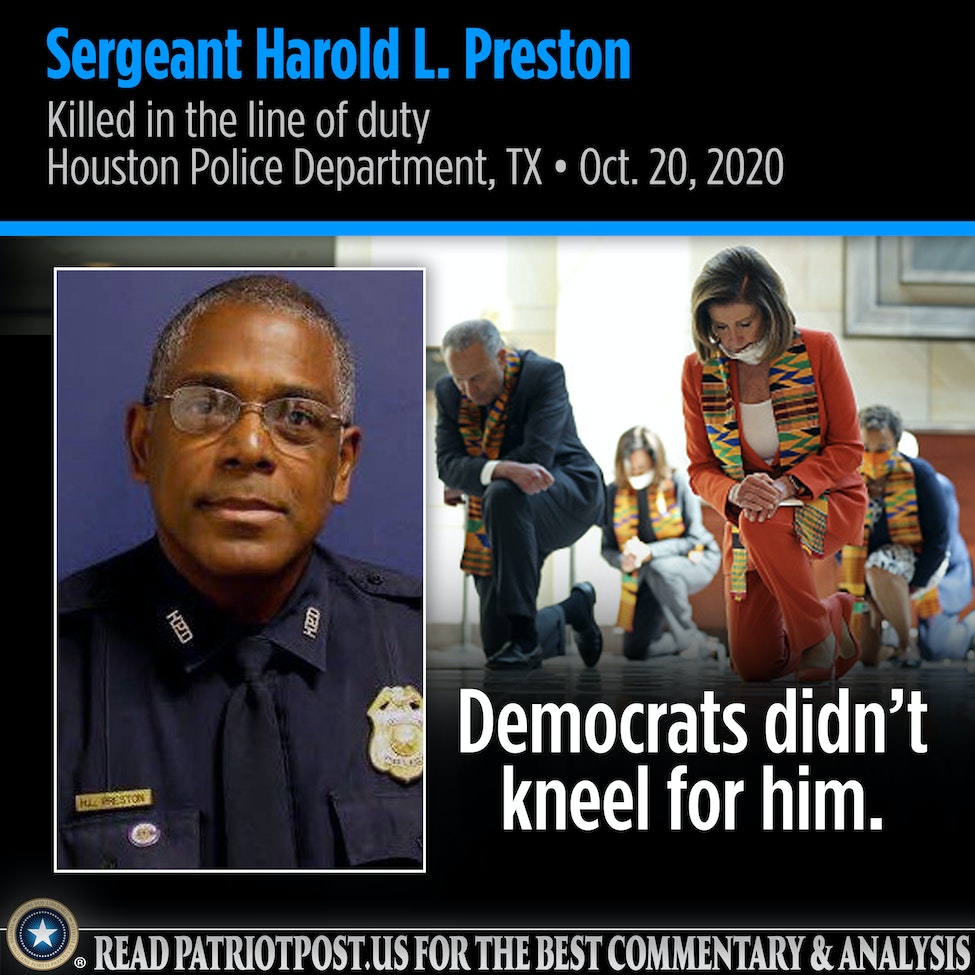 Criminal resistance to enforcement of immigration laws by Democrat governors and mayors, who established so-called “sanctuary cities, has been vigorous. But there is no sanctuary for their victims.

Houston is not technically a sanctuary city, but Police Chief Art Acevedo, doing the political bidding of Demo Mayor Sylvester Turner, has restricted his department from cooperating with ICE and other federal agencies. On Sgt. Preston’s death, Acevedo said, "We have lost a wonderful human being, and as good as he was as a cop, he was a better human being.” Nice sentiments for a police chief who paved the path for Preston’s murder.

Millions of illegal immigrants are on the streets, most of whom are not a direct threat to Americans. But as immigration lawyer Nolan Rappaport notes regarding the scope of the criminal threat: “70 percent of the 27,494 known or suspected aliens in [Bureau of Prisons] custody had been convicted of non-immigration-related crimes, as had 39 percent of the 23,580 known or suspected aliens in [US Marshals Service] custody. But that information isn’t even close to being comprehensive. Approximately 90 percent of the aliens incarcerated are held at state and local facilities.”

Joe Biden has repeated his promise earlier this year that, if elected, “In the first 100 days of my administration, no one — no one — will be deported at all. From that point on, the only deportations that will take place are for commissions of felonies in the United States of America.” So, an illegal immigrant has to commit a felonious assault before Biden will consider them deportable? Manzano-Martinez won’t be deported. He is a guest at one of our taxpayer-funded correctional institutions, where his room, board, educational, recreational, and healthcare needs will be “free.”