Christmas 2020: The Light of the World

An exceptional account of the search for the Light of the world.

“I am the light of the world. Whoever follows me will never walk in darkness, but will have the light of life.” —Jesus of Nazareth (John 8:12)

This week, many friends viewed with much interest what astronomers believe may have been the Christmas Star of Bethlehem, which guided the Wise Men to the place of Jesus’s birth. The conjunction of Jupiter and Saturn is a rare phenomenon, when the two planets are aligned so closely as to appear as one very bright star. It has been almost 400 years since the two planets were this close in alignment, and almost 800 years since it occurred at night.

This rare occurrence brought to mind an exceptional account of the Star of Bethlehem written by two of my favorite historians, the husband-and-wife team of David and Jeanne Heidler. They are authors of what I consider to be the best-reading historical narrative on the life of George Washington, Washington’s Circle: The Creation of the President, among other works. (A selection of their best essays appear on our site in the Heidler archive section.)

I invite you to read “The Baby in the Barn” below.

But first, fellow Patriots, a note about our Patriot Christmas: I ask that our team take a break with their families for the week between Christmas and the New Year. We will resume our regular publishing schedule Monday, January 4.

The Baby in the Barn — Look Skyward on Christmas Eve

The kings were on their knees, and their treasure had not been placed aside for safekeeping but was being offered to the newborn in the straw.

The light hurt their eyes and worse, it frightened them. A kind voice, more inside their heads than heard, told them not to be scared, and that helped. That, and the sheep, who were strangely calm. The voice said other things, but they could hardly understand any of it. It was all very confusing. In the distant sky there had been a rising star brighter than any they had ever seen, and that alone would have been cause to recall the night and tell down through the generations of the strange celestial event. But then the light had come, and the voice, and they were perplexed and uneasy. They were also drawn toward the star, without quite knowing why.

It led to Bethlehem, and under it everything became more peculiar still. The light shone down on a rude stable, and though not many people were gathering at it, enough were assembling to make the scene more than curious. At the center seemed to be a young couple. He seemed worried, and she was obviously tired. They had been caught out on a journey, and she had been too near her time, and the baby had come in this inhospitable barn. The shepherds looked to see the infant, but only gradually did they realize that the newborn boy had been wrapped in rough cloth and placed in the straw of a feeding trough. There was livestock, but it kept its distance. Like the sheep in the fields, these animals were oddly calm.

The gathering was an absurd conglomeration of shepherds and nobility, magi from afar who were kings by the sign of their crowns, who had obviously been going somewhere else with valuable cargo, including gold. Yet the kings were on their knees, and their treasure had not been placed aside for safekeeping but was being offered to the newborn in the straw.

Moving closer to see him, the shepherds found it hard to look at him for too long without wanting to cry, and to laugh, both at the same time. They would have suspected sorcery, but they had wanted to cry and had been allowed to laugh. As their throats tightened and their eyes welled, they felt a great mirth, inexplicable and uncontrollable. It was like falling in love, without the heartache, like seeing sunrise without feeling weary about the coming day, or sunset without dread over the coming dark. The baby in the barn under the star with kneeling kings and exhausted parents did that. The animals were calm, as if they alone knew. Anyone not there would never have believed it. At least at first.

Down through the ages, this unlikely tableau from more than two thousand years ago has been repeated in celebratory annual pageants staged by old and young alike, and in almost every instance and despite the most careful preparations, the Nativity is always destined to seem absurdly wrong in its particulars. The school play most often suffers this fate. Parents can labor for weeks over costumes, but one of the kneeling magi will reveal that he is wearing tennis shoes. The sets can be carefully constructed and repeatedly tested, but the innkeeper’s door will stick, the angel descending on the shepherds will teeter uneasily and forget her lines, and those brave enough to cast a real baby in the role of Christ will have a talker ready to babble over everyone’s speech or a crier who has had quite enough of Christmas pageants and raises the decibels accordingly. And yet, and just as it was that night in Bethlehem, it will all be perfect.

In The Bells of St. Mary’s, Sister Mary Benedict invites Father O'Malley to watch the first and second grade kids rehearse their Nativity play. Ingrid Bergman brought to her role as Sister Mary Benedict a kind of seraphic loveliness spiced by an almost hidden but nevertheless discernible will of iron, while Bing Crosby’s O'Malley was affable, easy-going Bing at his best. They smile as they watch the kids move awkwardly through the stages of the tale ticking off the required tribulations leading up to the birth. The little narrator, who is also playing Joseph, battles through a respiratory ailment that causes him to breathlessly announce the obvious — Mary is tired, there is no room at the inn, they’ll have to make do in the stable — and finally there is Jesus in the manger. As this unfolds, Bing asks Bergman what they have planned for an ending, expecting that it will be “Silent Night” or “Adeste Fidelis.” She’s allowed them a free hand in the staging and substance, though, and their choice of a closing song for the newborn Jesus is foolishly wrong. Except that it is just perfectly right. They sing “Happy Birthday.”

The best story about these plays gone wrong has to be the one involving a serious director, real animals on loan from a petting zoo, carefully fashioned sets, and fastidiously designed costumes. Rehearsals had put everything beyond the possibility of error, but at the last minute the director relented to allow a special education student a small speaking part. His teacher had been lobbying for this since the start of the project, but it was finally his parents visiting on the afternoon of the performance to convey how much it would mean to him that convinced Madame Director. She would let him have a go as the innkeeper who turns away Joseph and Mary. There was no time to rehearse, but she ran him through the single line “There-is-no-room-in-the-inn-go-to-the-stable” and showed him how to shut the door a half dozen times. She was convinced that nothing could go wrong.

That night, Joseph and Mary came to the inn and knocked on the door. The lad opened it and listened impassively to Joseph’s request for accommodations. He said his line perfectly and closed the door. Director, special education teacher, and his parents exhaled in relief. But the kid then opened the door and called after Joseph and Mary.

Everyone on stage and in the wings froze, minds spinning about how to recover from this mad ad lib, a derailment that ruled out the stable, the manger, the wise men, the shepherds, the borrowed livestock. Before anyone could recover and try to save the play, a smattering of applause broke the silence. It grew in volume until all the parents were on their feet whistling, clapping, and cheering.

It is the only instance in stagecraft where the play is most definitely not the thing. Depicting the Nativity derives its greatest pleasures from the unexpected, a congregational jubilation that covers for flubbed lines, silly costumes, and rickety sets. The King of a boundless dominion doesn’t mind, having been in the first of these incongruous productions where the audience wanted to cry, but felt like laughing, and fell in love.

That sort of feeling fills even slightly inhabited households with the sense that a grand community of celebrants is simultaneously observing the happy rituals of belief, rebirth, and giving, for at Christmas even those who are alone are not isolated. “And that, of course, is the message of Christmas,” wrote Taylor Caldwell. “We are never alone. Not when the night is darkest, the wind coldest, the world seemingly most indifferent. For this is still the time God chooses.”

As Christians look skyward on Christmas Eve and sing then and throughout the day following, no voice, inward or outward, is isolated in that noisy chorus that rattles the stars and has God smile on His children as we remember that stable, as the simple shepherds fearful of the star gazed in peaceful wonder on the weary couple, the kneeling kings, the tranquil animals. And in a manger, Him. 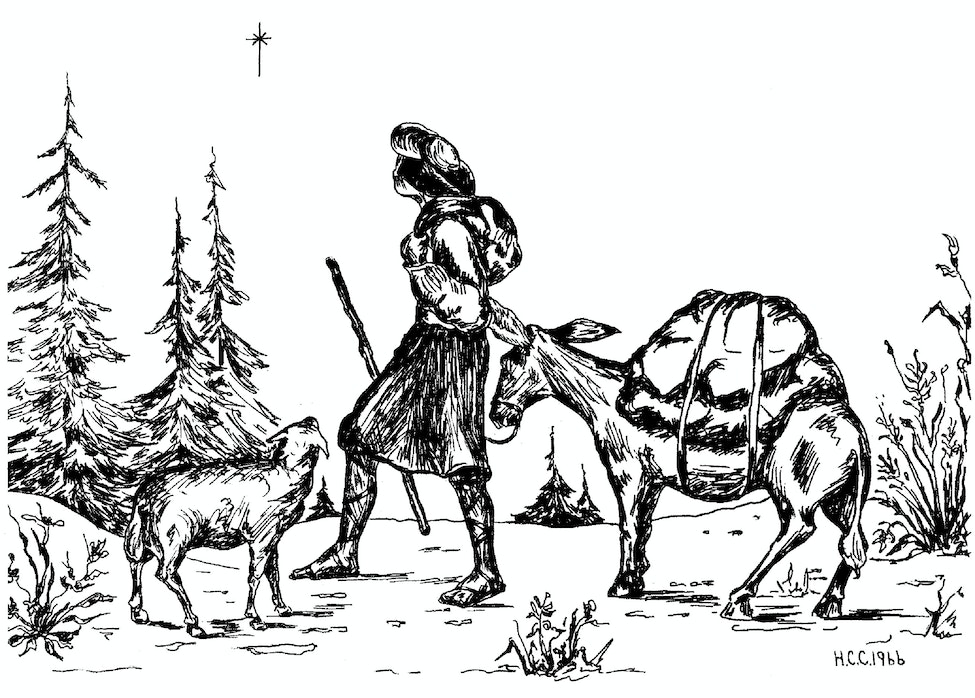