What Should the Minimum Wage Be?

$15 is over twice the current minimum wage and more than three times where it should be.

The progressive Left seems to be hell-bent on destroying America. “House Democrats believe that the minimum wage hike is necessary. Therefore, this provision will remain in the American Rescue Plan,” House Speaker Nancy Pelosi declared last week. “Democrats in the House are determined to pursue every possible path in the Fight For 15.” Indeed, Section 2101 of the American Rescue Plan Act of 2021 (HR 11) calls for “gradually” increasing the federal minimum wage from its current $7.25 per hour rate to $15.00 per hour by 2025 and then indexing it to median wage growth after that.

Thankfully, calmer heads have prevailed in the Senate (at least as of this writing). Despite Senate Majority Leader Chuck Schumer’s rant that Democrats “are not going to give up the fight to raise the minimum wage to $15 to help millions of struggling American workers and their families,” Senate parliamentarian Elizabeth MacDonough, the chamber’s nonpartisan arbiter of its rules, said the minimum-wage hike must be dropped from the COVID-19 bill under reconciliation rules.

Prominent Democrats have trotted out their usual talking points concerning the minimum wage during this pandemic, and they’re taking full advantage of the advice given by Barack Obama’s Chief of Staff Rahm Emanuel during the Great Recession of 2008: “You never want a serious crisis to go to waste. … It’s an opportunity to do things that you think you could not do before.”

As for wages, Senate Budget Committee Chair Bernie Sanders insists, “Let’s be clear: The $7.25 an hour federal minimum wage is a starvation wage.”

Schumer adds, “Americans working 40 hours a week should be able to put food on the table and a roof over their families’ heads, but with the minimum wage stuck at $7.25, far too many are working hard and still in poverty. Raising the minimum wage to $15 an hour is one step Congress should take right now, particularly with the COVID-19 crisis stretching families’ resources further than ever.”

According to Washington Democrat Patty Murray, chair of the Senate Committee on Health, Education, Labor and Pensions, “Throughout this pandemic, Democrats and Republicans alike have joined together in rightly calling our frontline workers ‘heroes.’ But despite their tireless work and the risk of COVID exposure, too many of these workers are paid wages so low, they can’t afford to pay for even their most basic needs. And because of systemic inequities and discrimination, workers of color, and in particular, women of color, are much more likely to be paid poverty-level wages.”

House Committee on Education and Labor Chair Robert Scott, the Virginia Democrat who introduced the Raise the Wage Act of 2021 (HR 603), the language of which has been folded into the American Rescue Plan Act, argues, “Even before the COVID-19 pandemic, the $7.25 federal minimum wage was economically and morally indefensible. Now, the pandemic is highlighting the gross imbalance between the productivity of our nation’s workers and the wages they are paid. Many of the essential workers who have braved a public health crisis to keep food on the table and care for our loved ones are still not being paid enough to provide for themselves or their families. Today, a full-time worker cannot afford a modest, two-bedroom apartment in any county in the U.S.”

While our “government masters” strut and pontificate in their respective chambers, the question that no one seems to want to honestly answer is this: What should a minimum wage actually be? We already know what leftists want. They ultimately want to be able to control every aspect of our lives, wages being merely one of those things. Sadly, the conservative Right seems unable to effectively rally around a strong counter to the Left’s demand for a “living wage.”

As any economist worth his salt will tell you, in a free market economy, the wage that an employer pays and that an employee receives is (or is supposed to be) a “negotiation” between those two parties. The employer would obviously like to obtain the employee’s labor at the lowest possible cost, whereas the employee would like to be compensated by the employer for his or her labor at the highest possible rate. Where they meet in the middle is where the pay rate should be. In the case of a minimum wage, that rate would be the intersection of the maximum rate an employer would pay for unskilled labor and the minimum rate an unskilled laborer would accept for minimal skill and services. It is sheer insanity to believe that a centrally controlled federal government can determine what that rate should be, and even more insane to apply a single minimum wage across the entire economy. The free market minimum wage in downtown New York City will be vastly different than the minimum wage in Twin Falls, Idaho.

The federal government codified a minimum wage in the Fair Labor Standards Act of 1938 (29 U.S.C. 206(a)(1)) and set it at 25 cents per hour. There is no automatic indexing of the minimum wage rate in the law, so Congress must regularly revisit and update it, which it has done on 21 occasions. The most recent change came in 2009, when the rate was raised from $6.55 per hour to $7.25 per hour. That rate is depicted by the solid green line in the chart below. The dashed green line reflects the minimum wage rate implementation proposed in the American Rescue Plan Act of 2021. 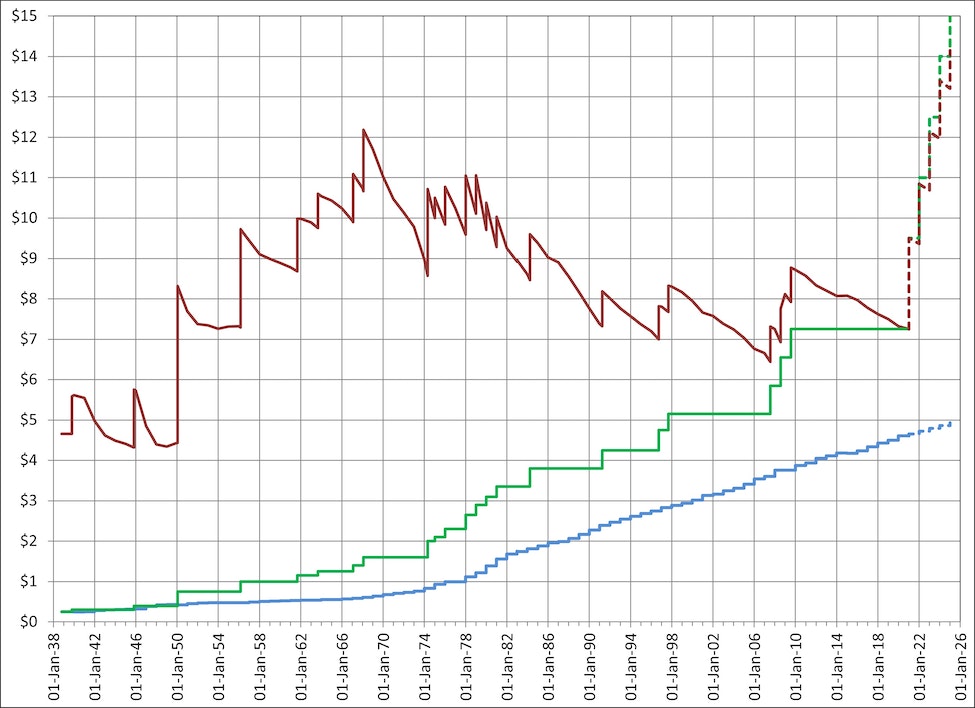 For an “apples-to-apples” comparison, the magenta line converts “then year” minimum-wage rates into current dollars using the Bureau of Labor and Statistics Consumer Price Index (CPI). It also assumes a 1.5% inflation rate for future years. The inflation-adjusted rate has ranged from a low of $4.32 per hour in 1945 to a high of $12.19 per hour in 1968 and it has averaged around $8.00 per hour over the 82-year life of the Fair Labor Standards Act.

As a “thought experiment,” we ran a model in which we assumed that the Fair Labor Standards Act included language mandating the minimum wage rate be annually indexed to the CPI. The solid blue line in the graph reflects what that rate would have been. One could argue that few could have complained about the rate, seeing as in each year it was being increased so as to maintain the “buying power” of a minimum-wage earner. Using this model, the minimum wage today would be just $4.66 per hour instead of $7.25 per hour.

In essence, the current minimum wage has kept the compensation for unskilled workers 0.55% ahead of inflation, but leftists want to more than double the current federal minimum wage — or more than triple what the rate would have been had it simply been indexed to the CPI. Then, with a straight face, they try to convince us that doing so will “boost” the economy. To envision what will happen on a national scale, one need look no further than the economic situations in California, where the statewide minimum wage as of January 1 is $14.00 per hour (for businesses with 26 or more employees), or in cities like Seattle, San Francisco, and New York City, where the minimum wage is already $15.00 per hour.

Leftists used the crisis of the 2008 Great Recession to give us the Affordable Care Act. We’ve seen how “affordable” healthcare has become since then. Now they’re using another crisis to give us the American Rescue Plan, which will do little to “rescue” us, particularly if it incorporates the language of HR 603. American Patriots need to do everything in their power to resist and defeat this effort lest we become Venezuela.