The president is more interested in forcing compliance than following the science.

Every cadet at West Point is required to memorize Major General John M. Schofield’s Definition of Discipline. The passage begins: “The discipline which makes the soldiers of a free country reliable in battle is not to be gained by harsh or tyrannical treatment. On the contrary, such treatment is far more likely to destroy than to make an army.” When it comes to medical tyranny, it seems the current commander-in-chief, Joe Biden, is intent on destroying an army by way of his vaccination mandates.

In his order mandating COVID-19 vaccination, Secretary of Defense Lloyd Austin described the military’s longstanding mandatory vaccine schedule as “familiar to all of our Service members, and mission-critical inoculation is almost as old as the U.S. military itself.” It’s true that General George Washington’s variola inoculation of the Continental Army against smallpox was a calculated and effective measure to preserve their fighting strength and ultimately win the American Revolution. Well-tested and safe vaccines provide vital protection for troops, especially in countries where diseases are prevalent or in combat conditions where basic hygiene and sanitation are difficult to maintain. The vaccines previously required by the military are known to be effective and sterilizing against disease while having adverse event risks of one in millions. The secretary closed his order by boldly stating, “Our vaccination of the Force will save lives.”

Unfortunately, the COVID-19 vaccines are still experimental, carry significant risks despite the Federal Drug Administration’s tepid licensing and underhanded emergency authorization extension, and in some cases even end lives. Healthcare is a very personal and individualized issue. Each person must weigh the risks and benefits of medical decisions themselves free of coercion. On November 2, Lieutenant Colonel Theresa Long testified before Congress detailing her firsthand experience treating the rising vaccine injuries of service members and unequivocally saying she believed vaccination was worse than the virus for young, healthy members of the military. She also recounted numerous instances of threats and intimidation used by military commanders to force soldiers into vaccination despite real concerns.

The Department of Defense is not only turning a blind eye to COVID-19 vaccination risks, but Secretary Austin’s order explicitly denies natural immunity due to prior infection, stating, “Those with previous COVID-19 infection are not considered fully vaccinated.” Just as General Washington’s example provides historical context for military vaccinations, his misguided penchant for exsanguination ultimately killed him and is a cautionary tale of employing medical interventions lacking sound scientific support.

According to VAERS, COVID-19 vaccinations account for 9,425 adverse event deaths in 2021 so far. This is a whopping 96.4% of the total for all vaccines, making them orders of magnitude more dangerous than other well-tested vaccines. The same can be said for the 41,965 adverse event hospitalizations, of which COVID-19 vaccines account for 97.8% of the total. The bad news doesn’t end there, especially for the revolutionary but untested mRNA vaccines that commandeer our own cellular biology to have ribosomes create COVID-19-specific spike proteins and induce an immune response. 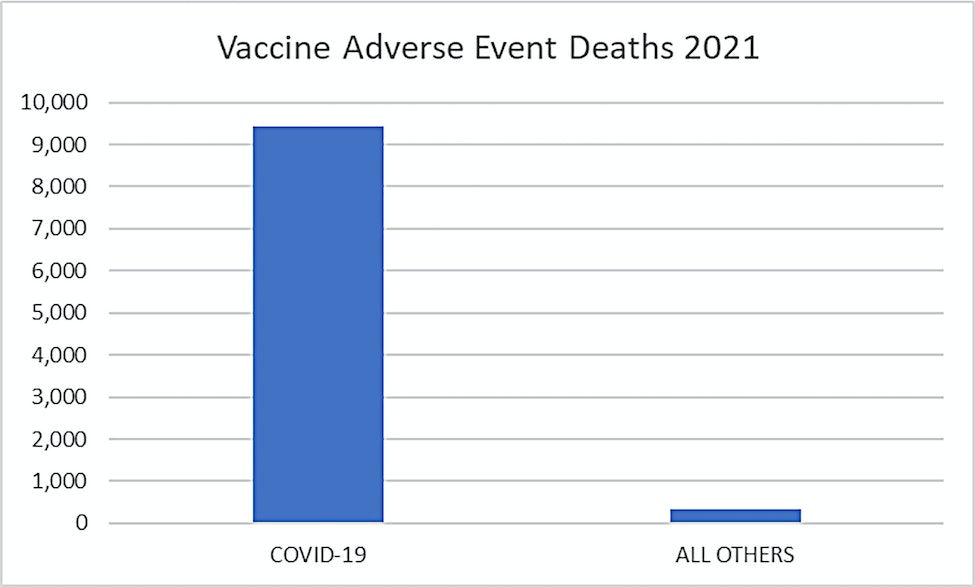 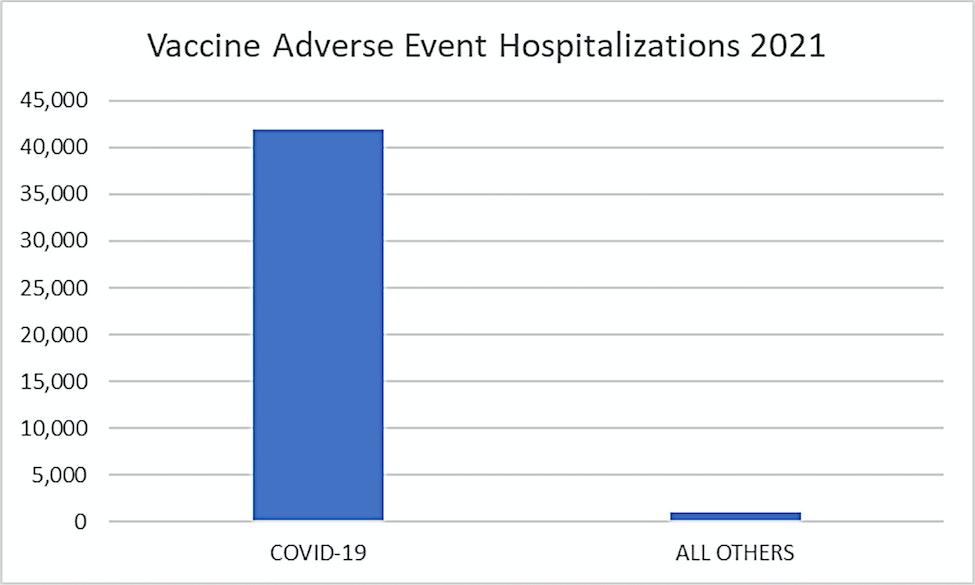 An Israeli study of Pfizer’s BNT162b2 vaccine in October 2021 found the risk of an adverse event for males aged 16 to 29 years old to be one in 10,000 — the highest risk among all demographics. To make matters worse, another Israeli study found that Pfizer vaccine antibodies dropped precipitously after 90 to 120 days and continued to drop when compared to natural immunity. This might explain why Pfizer destroyed its study’s placebo group at roughly the same time.

A recent Swedish study found similar results. In this case, using a retrospective cohort of 1.68 million Swedes by pairing vaccinated and unvaccinated individuals one-to-one, researchers found that the Pfizer vaccine’s effectiveness dropped from 92% in the first 30 days to 47% between 121 and 180 days with no effectiveness detected past 211 days. The drop was fastest in males, the elderly, and individuals with comorbidities. It’s no surprise the CDC began aggressively pushing boosters within six months of vaccination. Unfortunately, there’s no guarantee that antibodies generated by the booster will be any more durable than with the initial regime. Patients also run the risk of an adverse event with each additional shot.

The massive drop in antibodies likely explains the rising prevalence of breakthrough infections. Worse yet, the most recent UK Health Security Agency COVID-19 Vaccine Surveillance Report shows a disturbing trend of vaccinated individuals contracting COVID-19 at higher rates than the unvaccinated. The rate of infection in vaccinated individuals is practically double their unvaccinated counterparts in all age groups from 40 to 79. Only in ages 18 to 29 and over 80 are they almost equal, and very few children are vaccinated at all. While unvaccinated deaths are still double those of the vaccinated, vaccinated deaths are rising, and deaths below age 50 are virtually nonexistent. The charts below show both phenomena using numbers from the report. 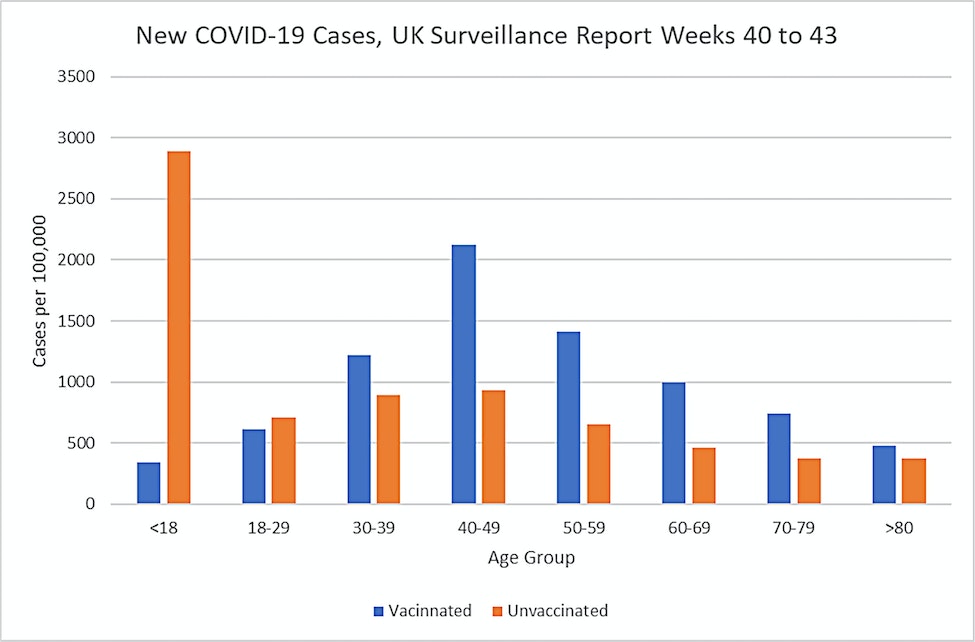 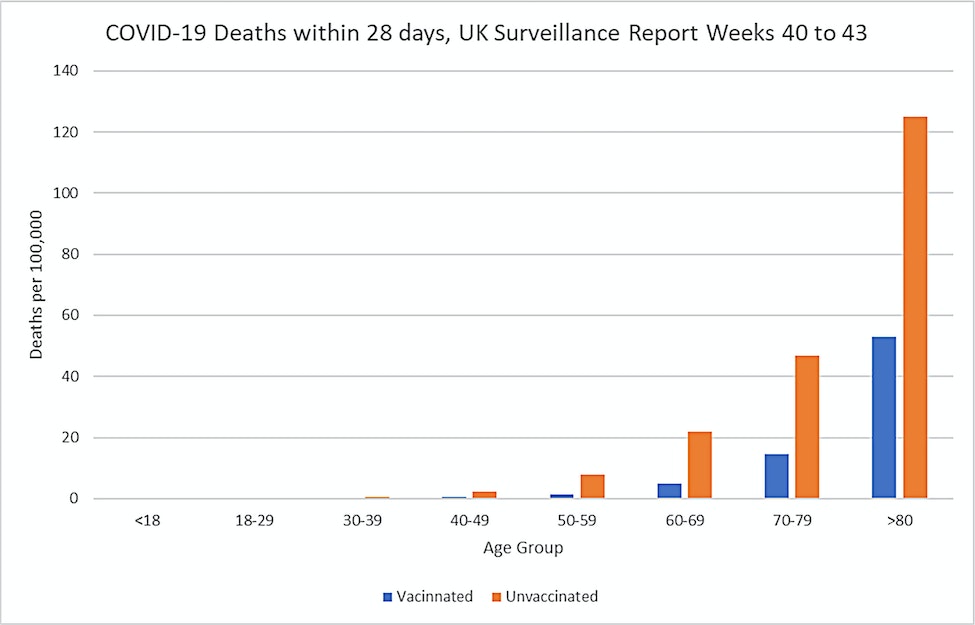 Additionally, natural immunity from infection has proven to be far superior to vaccine-induced immunity. Two additional Israeli studies, here and here, show that vaccine-induced antibodies decay much faster than those from natural infection. Natural infection also provided equal or greater protection. A Cleveland Clinic study in the United States observed that “COVID-19 did not occur in anyone over the five months of the study among 2579 individuals previously infected with COVID-19” and that “individuals who have had SARS-CoV-2 infection are unlikely to benefit from COVID-19 vaccination.”

So what does all this mean for military service members? Secretary Austin’s order directly contradicts the science supporting natural immunity from previous infection. The U.S. military consists predominantly of healthy young men that are simultaneously at the lowest risk from natural infection and the highest risk of adverse events from vaccination. At a minimum, previous infection should exempt service members from any COVID-19 vaccination requirements when we know natural immunity from infection is more robust than vaccine-induced immunity. Given the high risk and waning effectiveness of vaccines, natural infection of healthy individuals is even preferred to vaccination in many cases. It’s clear the COVID-19 vaccines are still experimental in nature, regardless of the highly politicized rulings and findings of the Food and Drug Administration or Centers for Disease Control. Secretary Austin, the Biden administration, and the CDC are more interested in forcing compliance than following the science.

While dubiously legal under the FDA’s licensing rulings and underhanded emergency authorization extension, Secretary Austin’s order is clearly immoral and unethical given its wholesale dismissal of the advantages of prior infection and ignoring the elevated risk of COVID-19 vaccination for young military service members. He and the Biden administration are intentionally using our familiarity with safe and effective vaccines prior to COVID-19 to force experimental treatment on military service members. Any decision on vaccination against COVID-19 should remain a personal and voluntary decision.

If there was ever a time to refuse an order on ethical and moral grounds, Secretary Austin’s COVID-19 vaccination order is that time. The Army’s manual on Leadership, ADP 6-22, states clearly in its first chapter: “Making an ethical choice and acting on it when faced with an ethical or moral issue can be difficult. Sometimes it means standing firm and disagreeing with a leader. These occasions test character.” Unfortunately, doing so is not without consequence, as the manual notes. “There is a risk when disobeying what is perceived to be an unlawful or immoral order — and it may be the most courageous decision an Army professional ever makes.” Courageous indeed, as service members are being threatened with letters of reprimand, relief or disqualification from command, ruined careers, and even dishonorable discharge for refusing vaccination.

(Lee Miller is a West Point graduate and combat veteran.)