The nation’s imprisonment numbers are way down, and — shocker — crime rates are way up.

Ah, 1992. Recall what happened back then: Bill Clinton won the presidency, and a crime wave would soon thereafter grip the nation — a crime wave that resulted in the passage of The Violent Crime Control and Law Enforcement Act of 1994, a piece of legislation that included “three-strikes” mandatory life sentences for repeat violent offenders, funding for community policing and prisons, a so-called assault weapons ban, and the Violence Against Women Act.

It was a crime bill that Joe Biden was for before he was against. That’s “young” Scranton Joe in the picture below, muscling his way into the frame and hovering over Bill Clinton’s left shoulder to make sure he gets due credit for the bill’s passage. 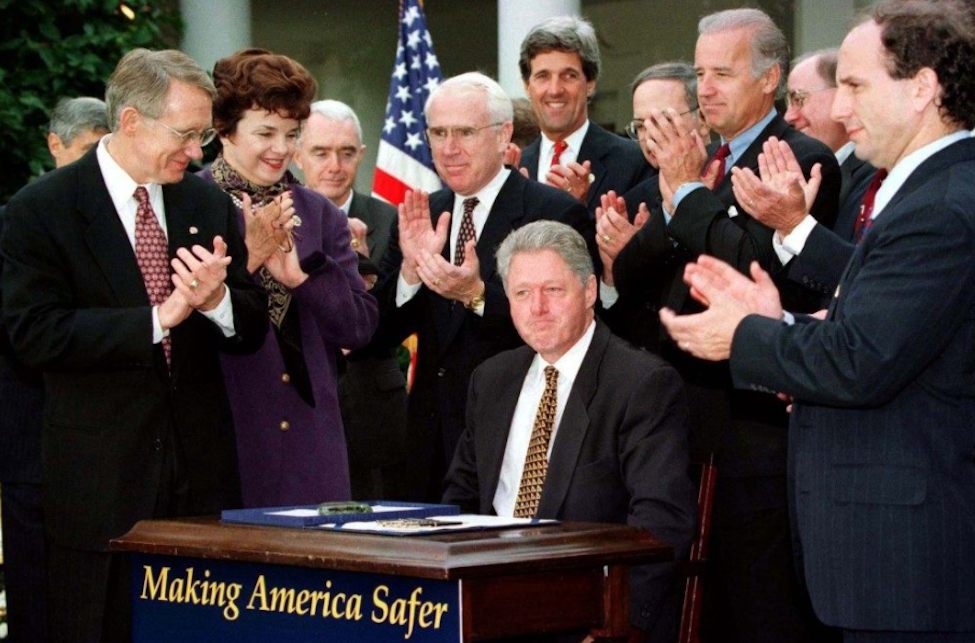 Nearly three decades later, though, when he made his third run for the presidency, Biden’s support for the 1994 crime bill became untenable. It didn’t matter that he’d co-sponsored the bill, and it didn’t matter that it had succeeded in helping to reduce crime. Joe Biden, like every Democrat, desperately needed the black vote. But the Congressional Black Caucus — a majority of whose members had voted for the crime bill’s passage — had long since denounced it as racist. And so, Biden began to distance himself from a bill he once proudly championed.

Why, you ask, are we looking back on these ancient events? Because we think Biden and his fellow Democrats will once again be forced to appear that they’re tough on crime. Incarcerations are way down, and crime is way up. And as we reported earlier this month, a dozen large U.S. cities — Albuquerque, Austin, Baton Rouge, Columbus, Indianapolis, Louisville, Philadelphia, Portland, Rochester, St. Paul, Toledo, and Tucson — had each eclipsed the single deadliest year in their history. (Incidentally, that number of record-setting murderous cities is now 17.)

Something’s got to give. Perhaps today’s soft-on-crime Democrats will see the writing on the wall and try to strike a tough-on-crime pose prior to next November’s widely expected electoral shellacking. That seems to be what San Francisco’s hard-left Mayor London Breed did recently, and it’ll be interesting to see if other Democrats follow suit.

As for the Congressional Black Caucus and its regular refrain of a systemically racist prison system that disproportionately incarcerates blacks for nonviolent offenses, take note: “Roughly 80% of black prisoners were in prison for murder, manslaughter, rape, robbery, aggravated assault, burglary, car theft, or weapons charges,” notes columnist Daniel Horowitz. “So, the notion that we have an over-incarceration problem among black criminals is a complete hoax — and in fact, we have an under-incarceration crisis among all demographics, especially for violent crimes and car thefts.”

Prison reform is a great idea — in theory. Donald Trump tried it, and anyone who saw the joy and the gratitude expressed toward him by Alice Marie Johnson couldn’t help but be moved. Johnson had already served almost 22 years of a life sentence for a first-time nonviolent drug conviction before then-President Trump commuted her sentence.

Unfortunately, not every offender is an Alice Johnson. Unfortunately, as one of our colleagues recently put it, “Some people just need to be behind bars.”