The Olympics Are Flopping, and That’s a Good Thing

The early viewership ratings are in, and they don’t look good for the Communist Chinese and their corporate enablers.

But they are. Boy are they ever. As the Associated Press reports: “Through the first four nights of competition, NBC is on track for the lowest-rated Winter Games in history. Friday night’s coverage on NBC, USA Network and Peacock averaged 12.8 million viewers, significantly down from the 27.8 million average in Pyeongchang four years ago.”

NBC is facing a cataclysmic loss of audience for the 2022 Winter Olympics as viewership tanked for Friday’s Opening Ceremony, averaging just 16 million. It is a record low for the Opening Ceremony (20.1 million for 1988 in Calgary was the previous record) and a whopping 43 percent below the 2018 Games in South Korea that notched 28.3 million viewers despite also dealing with a less than advantageous Asian time zone for American audiences. It comes on the heels of Thursday’s ratings disaster that saw just 7.7 million people tune in, dramatically below same-night audiences of 2018 (16 million) and 2014 from Russia (20.02 million).

Clearly, the “Not One Minute” viewership boycott championed by Fox News’s Laura Ingraham and others has had an impact.

This schadenfreude comes at a cost, of course. We love our country, and we love sports, so it’s only natural that we love the athletes who represent our country in international competition. But when weighed against the prospect of a propaganda victory for a murderous Olympics host, the Chinese Communist Party, which continues to abuse human rights and continues to cover up the origins of COVID-19, the choice to tune out is without a doubt the right one. A comparison from Nazi Germany to Communist China — from Berlin in 1936 to Beijing in 2022 — might seem overblown, but there’s currently not a more brutal nor more globally ambitious force on the planet than China’s rapacious communists. 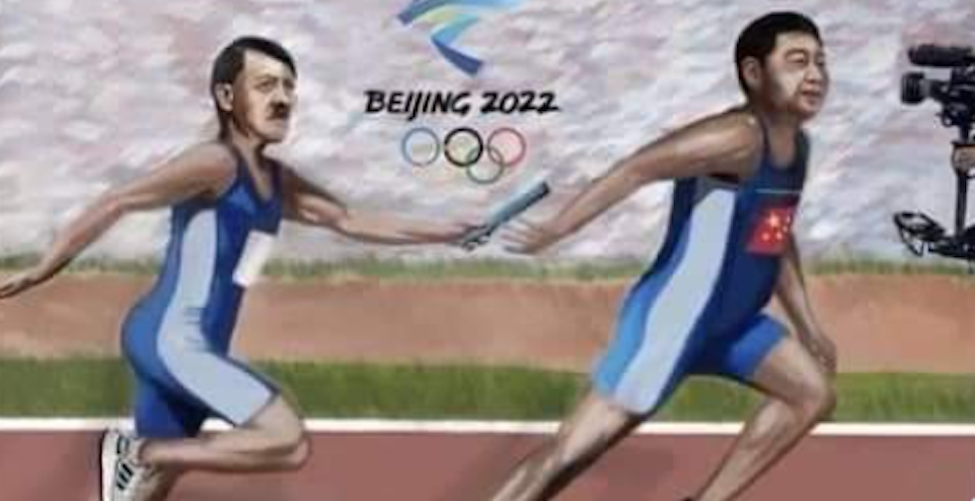 And the ratings crash couldn’t have happened to a nastier network than NBC, nor a more money-grubbing collection of see-no-evil corporate sponsors than Proctor & Gamble, Visa, and Coca-Cola. All three are part of the Olympic Partner Programme, the highest level of Olympic sponsorship offered by the corrupt International Olympic Committee.

National Review’s Jim Geraghty takes a kinder approach to NBC’s predicament, but without absolving the network for surely having known what it was getting into. He writes: “It isn’t the athletes’ fault that the IOC selected Beijing — not even a particularly cold or snowy city! — to host an Olympics for the second time in 14 years. It is not even NBC’s fault, although apparently the network’s billion-dollar investment in broadcasting the games makes it a hostage-partner to whatever propaganda the Chinese government chooses to present.”

Indeed, the propaganda. Not much discussion of the pandemic that has now killed more than 900,000 Americans and nearly six million people worldwide. And no Uyghur genocide to see here, folks — not when the commies go so far as to prop up a Uyghur torchbearer during the opening ceremonies.

“The sky is definitely not falling,” said NBCUniversal Television Chairman Mark Lazarus, trying gamely to put on his bravest face. “Yes, we have run into a bunch of bad factors that have made it harder for us. But most importantly, we had a realistic view on the audiences we were going to deliver, and we are delivering what we promised to the marketing community. But our trend line is pretty good. Our ratings have gone up the last three days. We are feeling that America is finding the Olympics.”

Is America really “finding” the Olympics? We’ll find out in the coming days. In the meantime, we can redouble our commitment: Not One Minute.

‘The GOP Base Is Still Resentful Over the COVID Response’

“The natural progress of things is for liberty to yield and government to gain ground.” —Thomas Jefferson (1788)