Yet Another Fake Hate Crime?

These hoaxes have very real victims — even if the Left and the mainstream media don’t want to talk about them.

We know what you’re thinking: Another fake hate crime?

And we couldn’t agree more. We’re just as tired of them as you are. But it’s critical that we continue to report on them, to publicize them widely, because their effects are no less destructive than those of authentic hate crimes.

A Black female student at a California high school admitted to putting racist graffiti above water fountains, according to an official with the school district. “While identification of the person involved in this incident has been addressed, we also will remain focused on supporting the healing of students and staff who have been impacted by this troubling act of vandalism,” Sacramento City Unified School District Superintendent Jorge Aguilar said Thursday.

What kind of graffiti? The kind that Joe Biden fantasizes about. We’re talking Jim Crow 2.0. Jim Crow on steroids. Even — dare we say it? — Jim Eagle. Take a look: 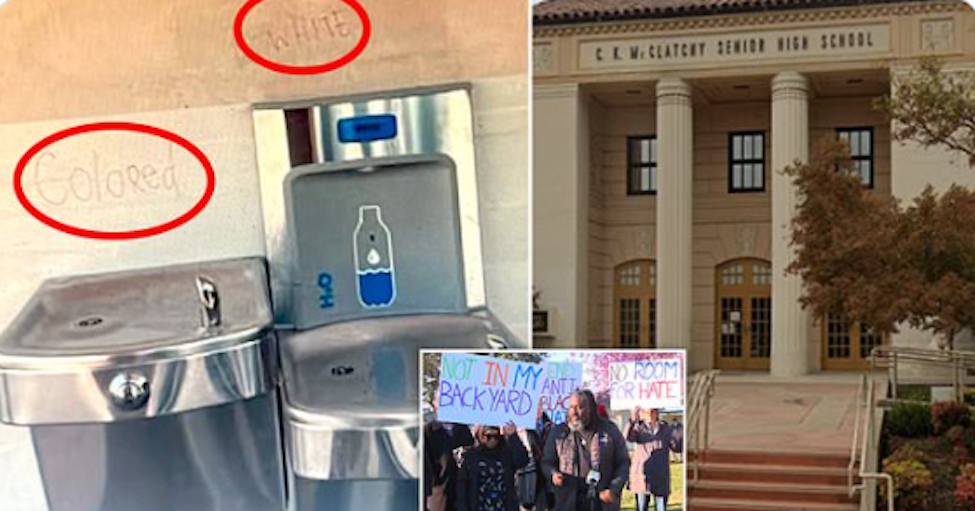 As for “the healing of students and staff,” we wonder: Is Aguilar referring to the students and staff who were falsely smeared by this hoax? And what about the punishment of the perpetrator? Surely, she’ll be expelled. After all, the Greater Sacramento NAACP has been demanding that the district “investigate, identify, expel and arrest those responsible.”

“We are expecting the school to do something about it not just say, ‘We found them.’ We want some accountability because they won’t stop,” said Greater Sacramento NAACP President Betty Williams.

Now, though, it seems Ms. Williams and her colleagues have gone silent. Why might that be? Sadly, she’s right about one thing: The perpetrators of these hoaxes won’t stop — at least not unless and until they’re held as severely accountable as the ostensible perps would be.

Lucky for us, the district pays good money for a “race and equity monitor” named Mark T. Harris to deftly and fairly navigate these racially troubled waters. And, as Harris told CBS 13, a black student did indeed admit to writing the words “White” and “Colored” over those two water fountains. Confession was probably a good idea, since she was caught in the act on the school’s videotape system. The school district didn’t release the student’s name, though.

“I don’t believe those words that were on those water fountains were racist,” Harris said. “I do not believe they were hate crime or hate speech. Part of it quite honestly is because the admitted perpetrator is a young African American woman. … It was a prank that went sideways.”

Ah, well. It was just a prank. And what’s a little racially incendiary prank among friends, right?

The leadership of the Sacramento City Unified School District can dismiss this incident as a prank if they so choose. But it’ll be to their deep disgrace. Only by punishing the perpetrators, inoculating the masses, and fire-proofing our institutions against these acts of racial arson can we rid American society of this scourge.