The “news” network knows its anti-scientific gender narrative doesn’t sell, so it resorts to fakery.

Those on the Left might not be able to say what a woman is, but they’re certainly trying to make Will Lia Thomas look like one.

Thomas, whose XY chromosome pairs allowed him to toy with the XX field on his way to a 500 meter freestyle title at last weekend’s NCAA women’s swimming national championships, looked decidedly unfeminine at the end of his race. So the Photoshoppers at NBC News decided to do something about it. Unfortunately for the Fake News peddlers at the peacock network, the American people aren’t as dumb as they’d surmised. As the Washington Examiner reports:

Viewers were quick to take note of NBC show Today’s attempt to feminize photos of controversial transgender college swimmer Lia Thomas that appeared during a discussion of the ongoing NCAA championship races. Photos of the student-athlete on the program had been heavily filtered, removing imperfections and softening features, sparking conversation on social media.

This, then, isn’t news; it’s propaganda. It’s a lie. When leftists don’t think they have a winning argument, they put their thumb on the scale — or in this case, they put their cursor on the skin-smoothing feature. No, it’s not as audacious as Josef Stalin airbrushing his political enemies out of existing photos, nor as overtly evil as Time magazine darkening and blurring O.J. Simpson’s mugshot, but the end result is the same: the pushing of a false reality. Or, as Donald Trump might say: fake news.

Speaking of Trump, his former White House director of digital content, Jonathan Gallegos, wasn’t impressed with the hacks at NBC, inasmuch as they used way too much cowbell. “It’s clear this job was not done by a professional,” he said. “This level of skin smoothing is a hallmark sign of an amateur job.”

In this case, NBC didn’t even have the decency to ask permission before vandalizing the photo. “When I first noticed the airbrushing on the segment referenced,” said photographer and University of Pennsylvania graduate Erica Denhoff, “I thought something was honestly wrong with the video. But then, I watched it again and thought, ‘Wait a minute, this appears to be intentional. Lia’s features are softened.’” She added: “I’m surprised and disappointed. … I pride myself on providing authentic images as a photojournalist.”

As it turns out, NBC had also doctored a previous photo Denhoff had taken of the 6-foot, 4-inch Thomas, giving him a softer appearance and a nice tan for good measure. So this isn’t a one-off; it’s an orchestrated campaign to falsely feminize a person who went through puberty as a male and began his Penn swimming career on the men’s team. 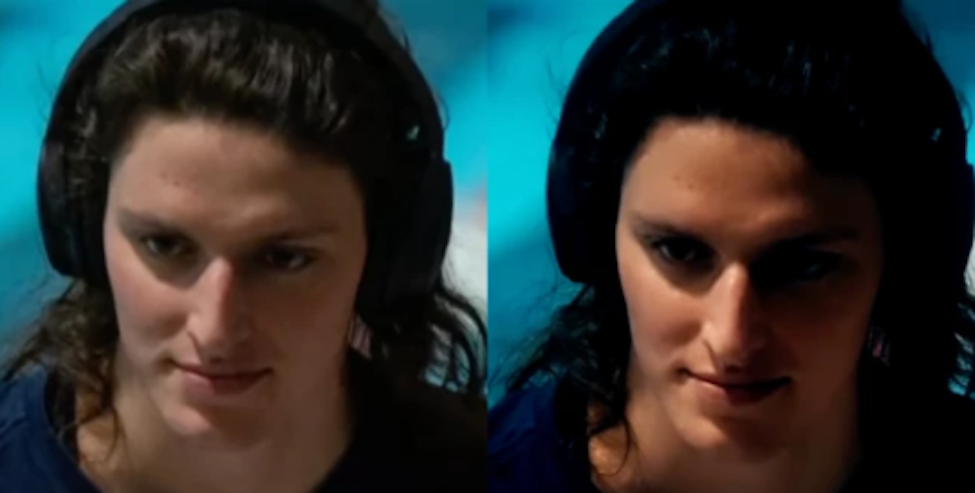 What all this tells us is that leftists don’t even believe their own laughably anti-scientific gender narrative. Think about it: If they really believed that men and women are indistinguishable, why do they feel the need to lie about it?