Two years of established facts should allay the concerns of nearly anyone still wearing a mask.

“The pandemic has eased, but not the compulsion of many Americans to cover their faces,” says former New York Times science writer John Tierney. Somehow, after two years and myriad data, many “true believers” remain.

Fully vaccinated adults are still wearing masks on their solitary walks outdoors, and officials have been enforcing mask mandates on airline passengers and on some city-dwellers and students. (Though [Monday’s] ruling by U.S. District Judge Kathryn Kimball Mizelle in Tampa, declaring the Biden administration’s mask mandate for public transportation unlawful, comes as welcome news.) Maskaholics in the press are calling for permanent masking on trains, planes, and buses. High school students in Seattle staged a protest demanding that a mask mandate be reinstated, and psychologists now deal with the anxieties of children who don’t want their classmates to see their faces. They’re suffering from “mask dependency,” as this psychological affliction is termed in Japan, where a long tradition of mask-wearing during flu season has left some individuals afraid at any time to expose their faces in public.

It’s a difficult addiction to overcome, according to the Japanese therapists who specialize in treating it — but a simple remedy might help some maskaholics. It’s a graph that should be required viewing for everyone still wearing a mask and every public official or journalist who still insists that mask mandates “control the spread.”

This graph was put together by data analyst Ian Miller. He’s written a book compiling COVID data about masks, Unmasked: The Global Failure of COVID Mask Mandates. But the graph itself is incredibly illuminating because it reveals that whether a state had a mask mandate or not made virtually no difference whatsoever in the number of COVID cases in the state: 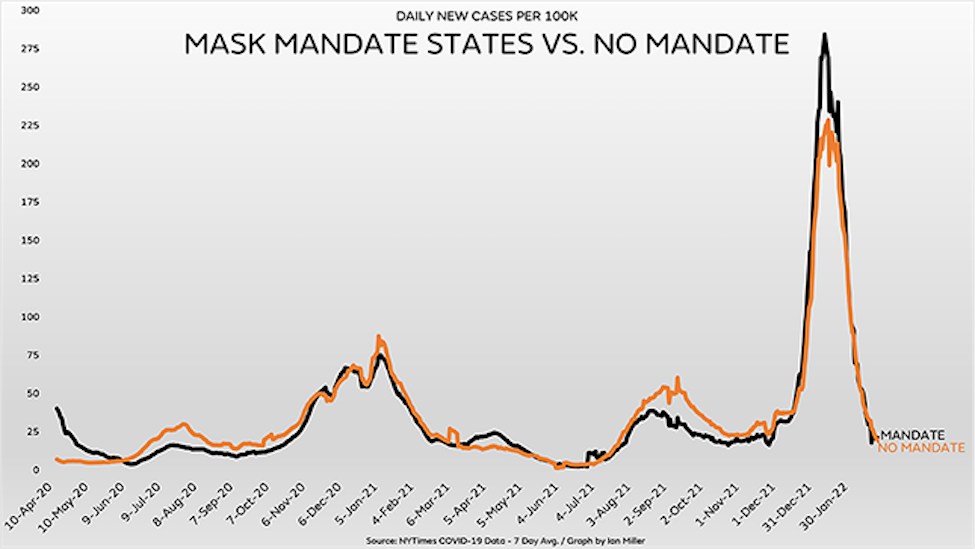 The graph tracks the results of a natural experiment that occurred nationwide during the pandemic. Eleven states never mandated masks, while the other 39 states enforced mandates. The mandates typically began early in the pandemic in 2020 and remained until at least the summer of 2021, with some extending into 2022. The black line on the graph shows the weekly rate of Covid cases in all the states with mask mandates that week, while the orange line shows the rate in all the states without mandates.

As you can see from the lines’ similar trajectories, the mask mandates hardly controlled the virus. By the time the mandates were introduced in New York and other states in the spring of 2020 (at the left side of the graph), infections had already been declining in those states, and the mandates didn’t prevent a surge later that year, when cases rose and fell in nearly identical trajectories regardless of states’ mask policies. The pandemic’s second year saw slight deviations in both directions, but those reflected the seasonality of the virus and the geography of mask mandates, which remained more common in northern states. Cases were higher in the non-mandate states last summer, when the seasonal surge in the South disproportionately hit Republican states without mandates, but those states went on to have fewer cases during the winter, when the seasonal surge in the North hit more Democratic states with mandates.

If you add up all the numbers on those two lines, you find that the mask mandates made zero difference. The cumulative rate of infection over the course of the pandemic was about 24 percent in the mandate states as well as in the non-mandate states. Their cumulative rates of Covid mortality were virtually identical, too (in fact, there were slightly more deaths per capita in the states with mask mandates).

He reminds readers that virtually no one recommended masks before the pandemic. Not Anthony Fauci and not big organizations.

In their pre-Covid planning strategies for a pandemic, neither the Centers for Disease Control nor the World Health Organization had recommended masking the public—for good reason. Randomized clinical trials involving flu viruses had shown, contrary to popular wisdom in Japan and other Asian countries, that there was “no evidence that face masks are effective in reducing transmission,” as the WHO summarized the scientific literature.

Eventually, of course, these people and entities “bowed to political expediency and media hysteria.”

Mandating masks gave the illusion of doing something against the virus. When the initial spring wave in 2020 subsided, public officials and journalists claimed that the mandates had worked, and they kept up the pretense even when Covid surged again later that year despite the continuing mandates. The resurgence was blamed on people disobeying the mandates, never mind the surveys showing widespread compliance.

Tierney goes through a lot more data, not just comparing U.S. states but foreign countries, and it all supports the conclusion that masks just didn’t do much to stop the spread. Thus, he concludes, “Covering up may give the maskaholics a false sense of security — but they could breathe more easily if they’d just face the facts.”

“If Congress can do whatever in their discretion can be done by money, and will promote the General Welfare, the Government is no longer a limited one, possessing enumerated powers, but an indefinite one, subject to particular exceptions.” —James Madison (1792)