Will There Ever Be Justice for Hillary and Her Henchmen?

If there’s one thing we’re learning about Beltway justice, it’s that it increasingly favors Democrats over Republicans.

Maybe, after he’s been sent unceremoniously into retirement with a coin-flip conviction of Clinton campaign lawyer Michael Sussmann and a more likely conviction of low-level Steele dossier cut-out Igor Danchenko, maybe then Special Counsel John Durham will write a book about all this. Because, increasingly, that seems like the only way this story is going to be told.

Not that it needs to be told. By now, everyone knows what happened. Everyone knows that Hillary Clinton, the modern era’s most miserable failure of a presidential candidate, approved a plan during her 2016 campaign against Donald Trump to feed false allegations of her opponent’s collusion with Russia to the media, thereby unleashing an FBI investigation of Trump that would plague the entirety of his presidency.

And how do we know this? Because the evidence tells us so. And because Hillary’s campaign manager admitted as much under oath on Friday. As The Washington Free Beacon reports:

Testifying to a federal court in the trial of Clinton campaign lawyer Michael Sussmann, Robby Mook noted that Clinton signed off on a scheme to send journalists data about possible links between Donald Trump and Russia’s Alfa Bank. The effort was successful, as a news outlet just days before the election published a story that alleged covert connections between Trump and the bank. The allegation has since been debunked, with the FBI finding there was not a nefarious link between Trump and Alfa Bank.

Mook was asked at the trial to read a statement [actually a tweet] Clinton released that touted the Slate story. Clinton wrote that “computer scientists have apparently uncovered a covert server linking the Trump Organization to a Russian-based bank.” She linked to a statement from Jake Sullivan, her foreign policy adviser, that said the story “could be the most direct link yet between Donald Trump and Moscow.” 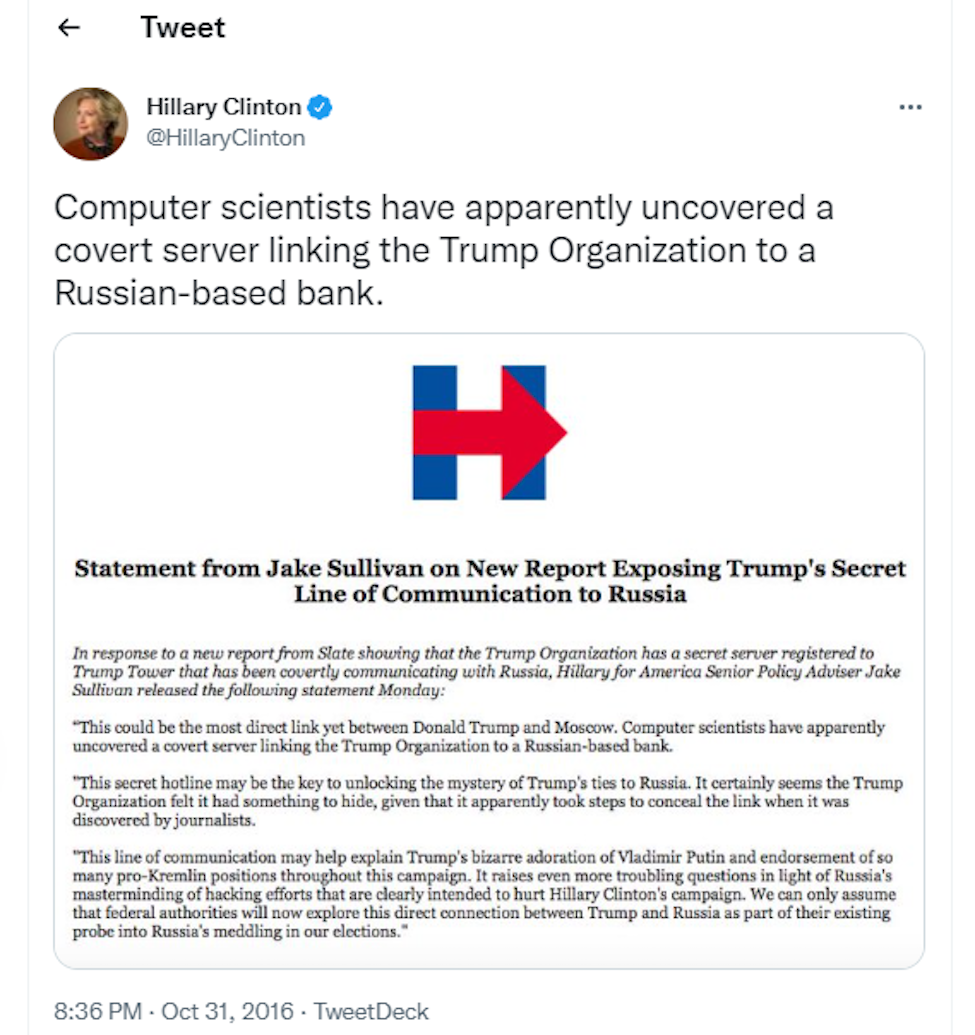 That’s Crooked Hillary in action. As the Wall Street Journal editorial board writes: “The Clinton campaign created the Trump-Alfa allegation, fed it to a credulous press that failed to confirm the allegations but ran with them anyway, then promoted the story as if it was legitimate news. The campaign also delivered the claims to the FBI, giving journalists another excuse to portray the accusations as serious and perhaps true.”

“A lie can travel half way around the world,” said Mark Twain, “while the truth is putting on its shoes.”

And so, even as the evidence of the worst dirty trick in American political history continues to mount, we’ve had a sinking feeling that the principals in this sorry affair — Hillary Clinton, Barack Obama, Susan Rice, John Brennan, James Clapper, James Comey, Andrew McCabe, and Peter Strzok — would never be held accountable. It’s a feeling of frustration that permeates our humble shop and doubtless is shared by many of you, our readers.

Instead of justice, though, some low-level cut-out named Kevin Clinesmith, an FBI lawyer who doctored evidence to help the Obama-Biden administration secure a FISA warrant to spy on the Trump administration, got a measly slap on the wrist. And now two more relative nobodies — Sussmann and Danchenko — are the only participants on trial.

Imagine if the tables were turned. Imagine if all the accused were Republicans instead of Democrats. We saw it half a century ago with Watergate, and we saw justice move much more swiftly and severely back then — and in a bipartisan way.

Those days of impartial justice are, sadly, long gone — sadly, at least, for Republicans. Democrats, on the other hand, are loving life.

“This should never happen to another president of the United States again,” said Donald Trump repeatedly during his term in office. And he’s right. Unfortunately, nothing in the way of justice has been done to dissuade Democrats from unleashing their next dirty trick.