The president celebrated while the stock market — and your retirement savings — collapsed.

“I did that!” Joe Biden’s tone-deaf victory rally yesterday essentially co-opted that gas pump sticker and repurposed it for celebrating the passage of the delightfully Orwellian legislation known as the “Inflation Reduction Act.” There’s something so very apropos — and utterly infuriating — about Biden on the White House lawn toe-tapping to a James Taylor serenade of “Fire & Rain” (a song about addiction and suicide) while yesterday’s worse-than-expected 8.3% inflation report caused the equity markets to plummet, lighting fire to the retirement savings of tens of millions of Americans.

The Inflation Reduction Act (IRA), Biden falsely claimed, is the “single most important legislation passed in the Congress to combat inflation and one of the most significant laws in our nation’s history.” In truth, the misnamed law will do nothing to reduce inflation. Just as the Affordable Care Act made healthcare prices skyrocket and the American Rescue Plan plunged the nation into 16 months and counting of inflation higher than any point since the 1970s, so too will spending yet another $740 billion on leftist grab-bag items only exacerbate rising prices for everyone.

In fact, Biden has added almost $5 TRILLION in inflationary spending to the national debt despite his claims about deficit reduction, and there’s a lot more to come, including the $1 trillion student loan bailout he issued a week after the IRA. “So I don’t want to hear it anymore about ‘big spending Democrats,’” he asserted yesterday. Then quit being big spenders.

While Biden was partying, Americans lost major equity value as the Dow Jones Industrial Average fell nearly 4% on Tuesday — the index’s worst day since June 2020 — and the S&P 500 dropped 4.32%. 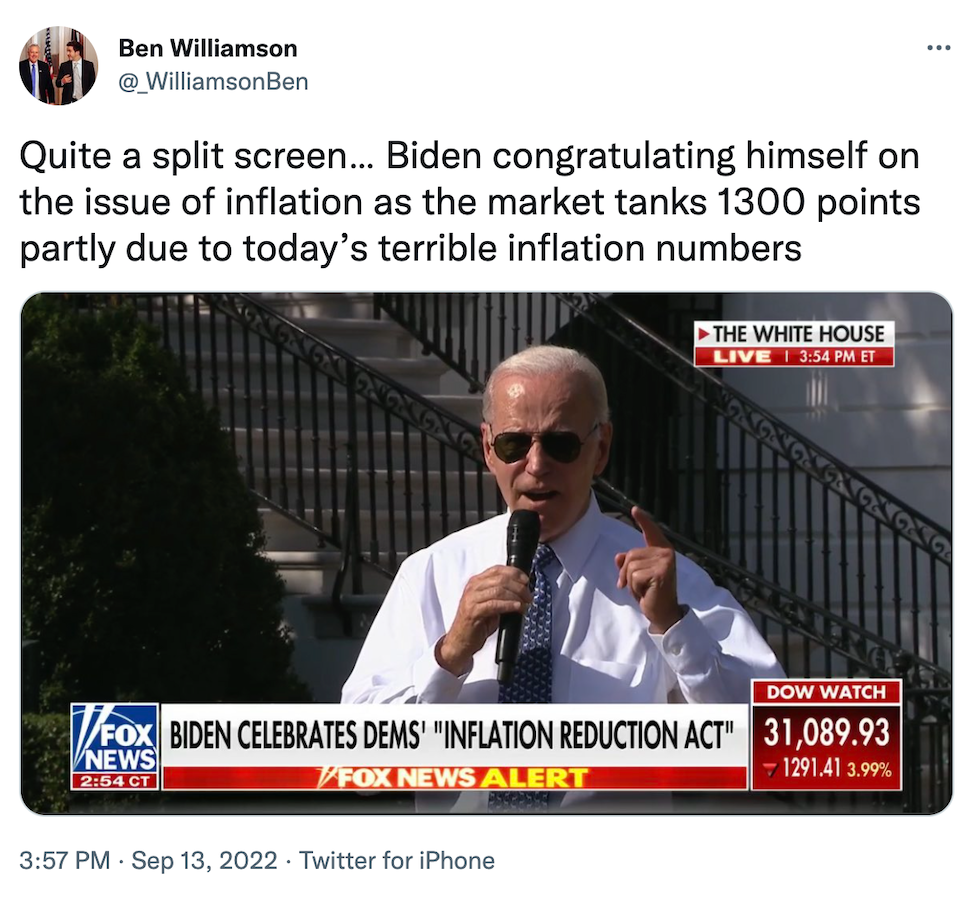 As Senate Minority Leader Mitch McConnell marveled, “They could not look more out of touch if they tried.”

Indeed, they couldn’t. House Speaker Nancy Pelosi gushed to Biden: “Your extraordinary leadership has made this glorious day possible. That’s an applause line.”

That’s a far cry from Biden’s boastful spin: “Today’s data show progress in fighting inflation. This month, prices overall were essentially flat, gas prices were down, and wages were up — that’s good news for American families.”

The most honest thing said by anybody in Biden’s circle about the inflation numbers was when his chief economic adviser, Gene Sperling, conceded, “I think we would have liked to have seen the core inflation numbers, uh, do better today.”

Biden is so out of touch that even former Obama advisers and media lickspittles are having trouble believing it. The New York Times called the inflation report “sobering.” NPR’s Mara Liasson complained about the law Biden was celebrating: “Once you call it the ‘Inflation Reduction Act,’ you have to show how it is reducing inflation, which it really doesn’t do.”

More broadly, according to Lawrence Summers, treasury secretary under Bill Clinton and National Economic Council director under Barack Obama, “Core inflation is higher this month than for the quarter, higher this quarter than last quarter, higher this half of the year than the previous one, and higher last year than the previous one.” In his words, we still have a “serious inflation problem.” Indeed, the Producer Price Index, which sets the stage for what consumers pay, is down from June’s high of 11.2% but it remains at 8.7%.

Footnotes: Federal Reserve leadership under Biden, the Associated Press tells us, “has become its most diverse ever.” That’ll fix it. Meanwhile, Biden left the White House after the ceremonies for a quick trip to Delaware in order to vote in the state primary. That trip likely cost more than a quarter-million dollars. Apparently, Biden hasn’t heard of a mail-in ballot.

What Lies to Watch for During Biden’s SOTU

Minnesota to Become Another ‘Trans Refuge’