The Politics of Hurricane Ian

Everything is political with the Left, including catastrophic hurricanes.

As Hurricane Ian bears down on Florida’s Gulf Coast at near-Category 5 strength, we pray for those in its path, including one of our Patriot Post teammates.

At the same time, we’re encouraged by the state’s preparedness, by its early issuance of a state of emergency, and by its evacuation of the coastal areas most at risk, all of which will no doubt save lives. There’s of course no escaping the property damage that a massive storm surge will bring with it, but there are few places on earth better equipped to weather a hurricane than Florida.

As for the political winds of a hurricane, which invariably lash Republican officeholders while leaving Democrats alone, Florida Governor Ron DeSantis is well prepared to weather them, too — not because he’s prepared for combat, but because he’s prepared for a hurricane. As if on cue, one agenda-driven journo tried to “tell” the governor a question during a press conference yesterday, but DeSantis set him straight. The exchange went something like this:

“FEMA Administrator [Deanne] Criswell said today that she acknowledged concerns that Florida [inaudible] lacks response to the storm so far and that—,” the reporter began. To which DeSantis interrupted: “Whoa, whoa, whoa. Give me a break. That is nonsense. Stop politicizing, okay? Stop it. We declared a state of emergency when this thing wasn’t even formed.”

If Hurricane Ian is indeed Ron DeSantis’s “Katrina,” then he’s clearly not inclined to follow the lead of former President George W. Bush, who mostly let a hostile press have its way with him. Think about it: What was the defining image of President Bush in the aftermath of Katrina? Here’s a hint: 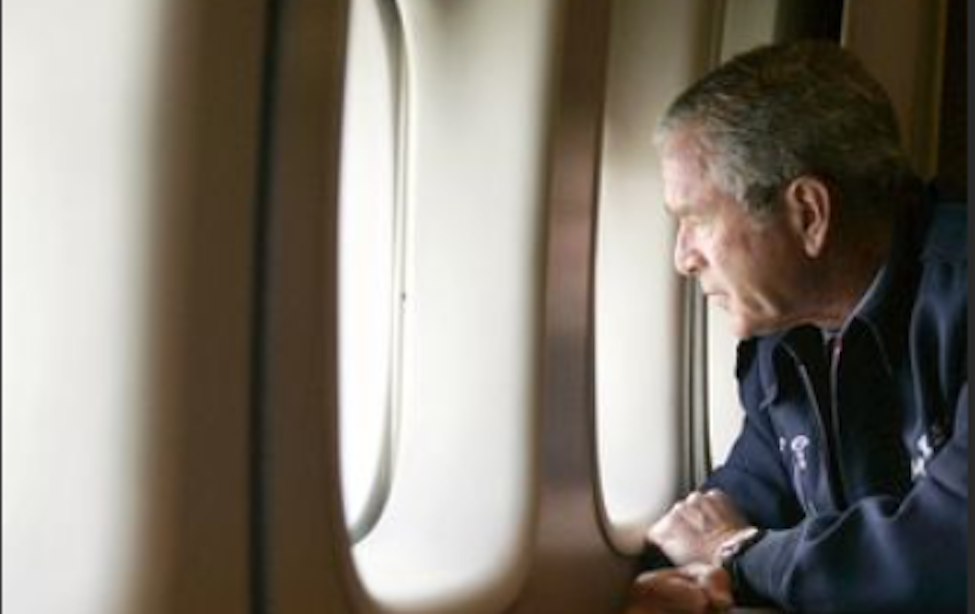 That, of course, was a picture of a “detached and uncaring” Bush staring down at the devastation of Katrina from the safety and remoteness of Air Force One — a picture which he later called “a huge mistake.” And what was the defining quote from President Bush during that critical moment of his presidency? “Brownie, you’re doing a heck of a job,” he said to his notoriously inexperienced FEMA director just three days after Katrina had killed more than 1,800 people, many of them in New Orleans’s poor and largely black Lower Ninth Ward.

Fairly or unfairly — and it was certainly unfair, especially given the local and far more crucial failures of New Orleans Mayor Ray Nagin and Louisiana Governor Kathleen Blanco — the media will write the first draft of Hurricane Ian’s history. DeSantis, while attending to what matters most, is absolutely right to remember this.

“President Biden spoke this evening with Governor DeSantis of Florida to discuss the steps the Federal government is taking to help Florida prepare for Hurricane Ian,” tweeted White House Press Secretary Karine Jean-Pierre. “The President and the Governor committed to continued close coordination.”

It’s about time. Yesterday afternoon, when asked whether he’d talked to President Biden, DeSantis was typically matter-of-fact: “You know, I’m happy to brief the president if he’s interested in hearing what we’re doing in Florida. You know, my view on all this is, you’ve got people’s lives at stake, you’ve got their property at stake, and we don’t have time for pettiness. We’ve got to work together to make sure we’re doing the best job for them. So I have not personally spoken with the president, but FEMA has approved our pre-landfall request.”

Indeed, effective leaders don’t have time for pettiness, and DeSantis knows it.

The Biden regime had initially snubbed the young governor who might one day be president, but we suspect Biden’s handlers ultimately realized that they’d better get their guy on board. Florida and Floridians will resolutely get through Hurricane Ian with or without this feckless presidential administration, and Team Biden clearly wants to benefit from whatever association it can establish with a popular governor during a time of crisis.

“It’s my sense that the administration wants to help,” said DeSantis last night. “I think they realize that this is a really significant storm.”

Whether that’s true or not, it’s good of the governor to say so. But as for the mainstream media, DeSantis is wise to remain on guard.