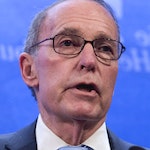 Larry is host of CNBC's Kudlow & Company, which airs nightly from 5 p.m. to 6 p.m. He is also economics commentator for CNBC. He hosts a weekly Saturday radio show on WABC Radio.

Mr. Kudlow is a nationally syndicated columnist and also has a blog site at www.kudlow.com. He is a contributing editor of National Review magazine, as well as a columnist and economics editor for National Review Online. He is the author of American Abundance: The New Economic and Moral Prosperity, published by Forbes in January 1998.

Mr. Kudlow is consistently ranked one of the nation's premier and most accurate economic forecasters according to The Wall Street Journal's semiannual forecasting survey.

He is a Distinguished Scholar of the Mercatus Center at George Mason University in Arlington, Virginia.

For many years, Mr. Kudlow served as chief economist for a number of Wall Street firms. Mr. Kudlow was a member of the Bush-Cheney Transition Advisory Committee. During President Reagan's first term, Mr. Kudlow was the associate director for economics and planning, Office of Management and Budget, Executive Office of the President, where he was engaged in the development of the administration's economic and budget policy.

He is a trusted adviser to many of our nation's top decision-makers in Washington and has testified as an expert witness on economic matters before several congressional committees. He has also presented testimony at several Republican Governors Conferences.

Mr. Kudlow began his career as a staff economist at the Federal Reserve Bank of New York, working in the areas of domestic open market operations and bank supervision.

Mr. Kudlow was educated at the University of Rochester and Princeton University's Woodrow Wilson School of Public and International Affairs. He is a member of the Union League Club, the Capitol Hill Club and the National Women's Republican Club. Mr. Kudlow is an avid tennis player and golfer. He and his wife, Judy, live in New York City and Redding, Connecticut.