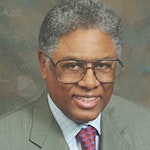 Thomas Sowell was born in North Carolina and grew up in Harlem. As with many others in his neighborhood, he left home early and did not finish high school. The next few years were difficult ones, but eventually he joined the Marine Corps and became a photographer in the Korean War. After leaving the service, Sowell entered Harvard University, worked a part-time job as a photographer and studied the science that would become his passion and profession: economics.

In the early '60s, Sowell held jobs as an economist with the Department of Labor and AT&T. But his real interest was in teaching and scholarship. In 1963, at Douglass College, he began the first of many professorships. His other teaching assignments include Cornell Univeresity, Rutgers University, Amherst University, Brandeis University and the University of California at Los Angeles, where he taught in the early '70s.

Sowell has published a large volume of writing. His 28 books, as well as numerous articles and essays, cover a wide range of topics, from classic economic theory to judicial activism, from civil rights to choosing the right college. Moreover, much of his writing is considered ground-breaking -- work that will outlive the great majority of scholarship done today. Sowell's most recent book, On Classical Economics, is an historical review of classical economics consisting of a series of essays. David C. John of the Roe Institute for Economic Policy studies calls it "An important, beautifully researched collection" that is able "to clearly and simply explain both complex questions of economic theory and how they developed."

Though Sowell had been a regular contributor to newspapers since the late '70s, he did not begin his career as a newspaper columnist until 1984. George F. Will's writing, says Sowell, proved to him that someone could say something of substance in so short a space (750 words). And besides, writing for the general public enables him to address the heart of issues without the smoke and mirrors that so often accompany academic writing.

Currently, Sowell is a senior fellow at the Hoover Institution in Stanford, California. Read our profile on Dr. Sowell here.