Patriots’ Day: Sons of Liberty Then and Now

‘Tis the Season for a Patriot Spring

“Let us therefore rely upon the goodness of the Cause, and the aid of the supreme Being, in whose hands Victory is, to animate and encourage us to great and noble Actions – The Eyes of all our Countrymen are now upon us. … Let us therefore animate and encourage each other, and shew the whole world, that a Freeman contending for Liberty on his own ground is superior to any slavish mercenary on earth.” –George Washington, 1776 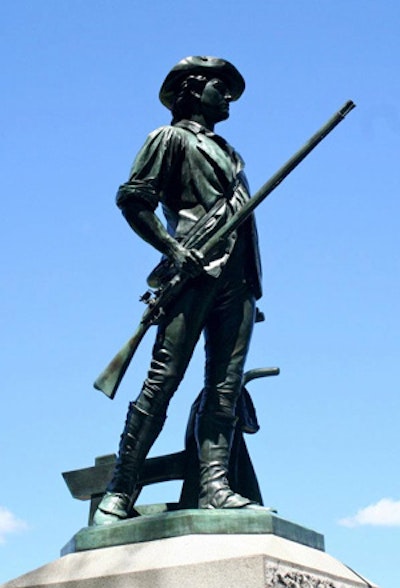 April 19th is the anniversary of Patriots’ Day, marking the opening salvo of the American Revolution in 1775, and the first step toward the establishment of an eternal declaration of human Liberty, subordinating the rule of men to the Rule of Law.

A quick search of Barack Hussein Obama’s White House website reveals not a single reference to this most notable date in the history of our. Undoubtedly the statist regime occupying the Executive Branch would not want to promote this formative event which led to a call to arms to turn back a growing tide of tyranny.

Try though Barack Hussein Obama might to ignore it that is precisely what occurred on this day in 1775, when a small band of citizen Patriots challenged the authority of the most powerful government in the history of man. Take a moment to revisit the events of that day, and share this account with those you know who may never have had an introductory lesson in civics, the story of how a small group of American Patriots irrevocably altered the course of history toward a new bearing of Liberty.

In December of 1773, the Sons of Liberty, a group of Boston “radicals” acting under the leadership of Samuel Adams, galvanized a rebellion against authoritarian colonial rulers, through the simple act of dumping tea into Boston Harbor – a protest of a small three pence tax levied by the British. That event was immortalized as the “Boston Tea Party,” and was the inspiration for the rising rebellion in this era called the Tea Party Movement.

Sixteen months after the Boston Tea Party, the first Patriots’ Day began with the horseback gallop of Paul Revere and William Dawes, just after midnight, en route to Concord, Massachusetts. Their mission was to warn John Hancock and Samuel Adams that British troops were coming to arrest them and seize their weapons. The British understood that to render neutral any resistance to tyranny, they must first disarm the people and remove from them the palladium of the liberties.

Revere was captured but Dawes and Samuel Prescott, who had joined them along the way, escaped and continued toward Concord. Dawes later fell from his horse, but Prescott, who knew the area well enough to navigate rapidly at night, made it to Concord in time to warn the Sons of Liberty.

At dawn, farmers and laborers, landowners and statesmen alike, gathered to confront the British, pledging through action what Thomas Jefferson would later frame in words as “our Lives, our Fortunes, and our Sacred Honor.” Thus began the great campaign to reject the predictable albeit tyrannical order of the state and to embrace the difficult toils of securing individual Liberty. It was this as-yet unwritten pledge by militiamen in the Battles of Lexington and Concord that would delineate the distinction between Liberty and tyranny in Colonial America.

Why would the first generation of American Patriots forgo, in the inimitable words of Samuel Adams, “the tranquility of servitude” for “the animating contest of freedom”?

The answer to that question defined the spirit of American Patriotism at the dawn of the American Revolution, and to this day and for eternity, that spirit will serve as the first line of defense against tyranny.

In the first months of the American Revolution, English author and lexicographer Samuel Johnson, a Tory loyalist, wrote that American Patriots’ quest for liberty was nothing more than “the delirious dream of republican fanaticism” which would “put the axe to the roots of all government.” Johnson concluded famously, “Patriotism is the last refuge of a scoundrel.”

In the same year Johnson founded the now-popular pastime of denigrating American Patriotism, Founder Alexander Hamilton was aptly defining its Foundation: “To grant that there is a supreme intelligence who rules the world and has established laws to regulate the actions of his creatures; and still to assert that man, in a state of nature, may be considered as perfectly free from all restraints of law and government, appears to a common understanding altogether irreconcilable. Good and wise men, in all ages, have embraced a very dissimilar theory. They have supposed that the deity, from the relations we stand in to himself and to each other, has constituted an eternal and immutable law, which is indispensably obligatory upon all mankind, prior to any human institution whatever. This is what is called the law of nature.”

Hamilton continued: “Upon this law depends the natural rights of mankind: the Supreme Being gave existence to man, together with the means of preserving and beatifying that existence. He endowed him with rational faculties, by the help of which, to discern and pursue such things, as were consistent with his duty and interest, and invested him with an inviolable right to personal Liberty, and personal safety. The Sacred Rights of Mankind are not to be rummaged for, among old parchments, or musty records. They are written, as with a sun beam, in the whole volume of human nature, by the Hand of the Divinity itself; and can never be erased or obscured by mortal power.”

Our Founders declared “that all men are created equal, that they are endowed by their Creator with certain unalienable Rights,” and they constituted this affirmation in order to “secure the blessings of Liberty to ourselves and our posterity.”

Unlike King George’s partisans and generations of authoritarians since, American Patriots were and remain unwaveringly loyal to something much larger than a mere man or geopolitical institution. They pledged their sacred honor, as do we, in support of Essential Liberty as “endowed by our Creator” and enshrined in our Declaration of Independence and its subordinate guidance, our Constitution. 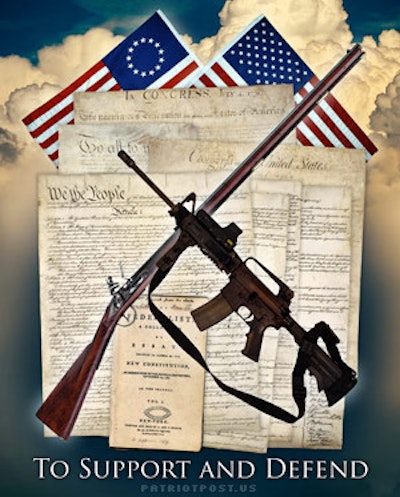 It is this resolute devotion to the natural rights of man, the higher order of Liberty as endowed by God, not government, which defines the spirit of American Patriots, and has obliged the animating contest of freedom from Lexington Green to this day.

Since the dawn of Patriots’ Day in 1775, and loudly again in the present era, the essence of Johnson’s denigration of patriotism has been repeated by statists, who augment their disdain for Patriots with words like “fascist,” “nationalist” and “jingoist.”

These statists, Democratic Socialists in the current vernacular, would have us believe that they are the “true patriots,” and only they deserve to be the arbiters of Liberty. But, caveat emptor: As George Washington implored in his Farewell Address, “Guard against the impostures of pretended patriotism.”

Liberty, as affirmed through natural law, is an abject affront to Socialists, who can claim dominion over others only if they supplant Rule of Law with their own rule. For such statists, the notion of serving a higher purpose than oneself is enigmatic; consequently, there is a raging ideological battle between Democratic Socialists and Patriots across our nation today.

Our steadfast support for Liberty and limited government is diametrically opposed to the Socialist manifesto of the once-noble Democrat Party, as reframed by Franklin Delano Roosevelt in 1933, and renewed by every Democrat president since.

Regardless of how statists choose to promote Democratic Socialism, like National Socialism it is nothing more than Marxist Socialism repackaged. Ultimately, it likewise seeks a centrally planned economy directed by a dominant-party state that controls economic production by way of taxation, regulation and income redistribution. 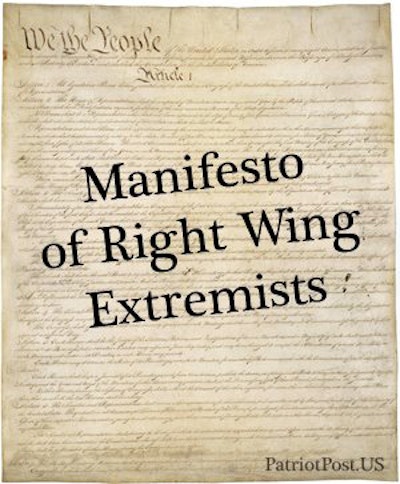 So, will this Patriots’ Day pass without our renewed commitment to keep and carry forward the endowment which inspired those who fired the “shot heard ‘round the world”?

Of those content to be subjects rather than citizens, Samuel Adams’ stirring words ring true today: “If ye love wealth better than liberty, the tranquility of servitude than the animating contest of freedom, go from us in peace. We ask not your counsels or arms. Crouch down and lick the hands, which feed you. May your chains sit lightly upon you, and may posterity forget that ye were our countrymen!”

Of course, the ranks of American Patriots today, however thin, are much like those of previous generations. We remain singularly devoted to the defense of Liberty over tyranny.

In 1775, John Adams wrote, “A Constitution of Government once changed from Freedom, can never be restored. Liberty, once lost, is lost forever.”

In 1776, George Washington, in General Orders, wrote, “The time is now near at hand which must determine whether Americans are to be freemen or slaves; whether they are to have any property they can call their own; whether their houses and farms are to be pillaged and destroyed, and themselves consigned to a state of wretchedness from which no human efforts will deliver them. The fate of unborn millions will now depend, under God, on the courage and conduct of this army. Our cruel and unrelenting enemy leaves us only the choice of brave resistance, or the most abject submission. We have, therefore, to resolve to conquer or die.”

Once again, the time is at hand when our Patriot ranks must determine whether Americans are to be freemen or slaves – and this election year will determine in large measure the fate of our nation.

Fellow Patriots, please support our mission to sustain our legacy of Liberty through The Patriot Post, a touchstone for countless American Patriots across our nation.

More important, help us promote Liberty through the distribution of millions of Essential Liberty Project pocket guides to young people in educational institutions nationwide. This guide is a proven and effective tool to educate those of all ages who are uninformed about Liberty and tyranny, and ambivalent about how to stand for freedom. We can enlist them into our Patriot ranks with your support.

“Public opinion sets bounds to every government, and is the real sovereign in every free one.” —James Madison (1791)