“Gentlemen, you will permit me to put on my spectacles, for, I have grown not only gray, but almost blind in the service of my country.” –George Washington (1783) 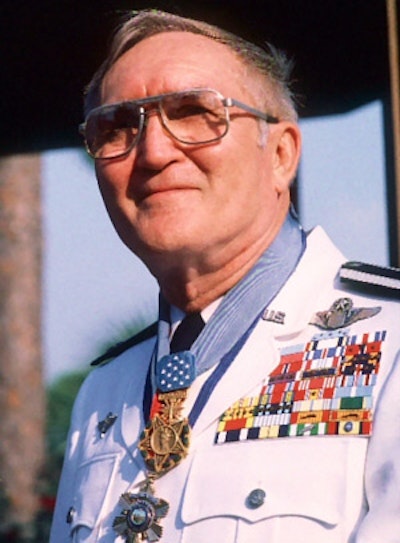 A few days ago, I received the latest copy of “The Hook,” a seasonal journal of carrier aviation published by the Tailhook Association.

I was deeply moved by this summer’s edition because it included a reprint of “Honor Bound,” a Pentagon study of bravery, torture and endurance – and the experience of American POWs in Vietnam.

The Hook then listed the names of Navy and Marine POWs who made it home, including John McCain.

Later that same day, I heard remarks at a White House press conference that should be of interest to the families of the 58,209 Americans killed in Vietnam.

Barack Hussein Obama, while sitting with Vietnamese Communist Dictator Truong Tan Sang under a portrait of George Washington, had this to say about what our nations have in common: “We discussed the fact that Ho Chi Minh was actually inspired by the U.S. Declaration of Independence and Constitution, and the words of Thomas Jefferson.”

Obama, of course, is a phony “community organizer” who was steeped in Communist indoctrination, and who launched his political career in the home of domestic terrorists Bill Ayers and Bernardine Dohrn. Thus, he may not be able to distinguish between the Essential Liberty codified by our Founders in the Declaration of Independence as “endowed by our Creator” and the murderous regime of “Uncle Ho,” a brutal Stalinist pig who slaughtered a HALF MILLION peasants when consolidating his oppressive communist regime in Vietnam. Most of us, however, understand that Ho was no Thomas Jefferson.

After the signing of the Paris Peace Accords in 1973, which were intended to end the war in Vietnam, Ho went on to butcher anyone who had given aid to American military personnel.

The disconnect between Obama’s outrageous and surreal comments about Ho and the bravery of Patriot Vietnam POWs like John McCain and my friend Roger Ingvalson was driven home this past weekend with the death of a man who was also a POW at the Hanoi Hilton with McCain and Ingvalson – Air Force Col. George Everett “Bud” Day.

While these men were suffering unspeakable torture, Hanoi Jane Fonda was posing a hundred yards away on an NVA anti-aircraft gun, and now-Secretary of State John Kerry was “aiding and abetting the enemy” and undermining the Paris peace talks.

At least Fonda feigned an apology this past April, saying, “I take responsibility for my actions. … I made an unforgivable mistake when I was in North Vietnam, and I will go to my grave with this.”

No such apology from Kerry.

At times, the Obama regime’s fog machine makes it difficult to maintain clear focus on the long line of American Patriots who have devoted their lives and fortunes to extending Liberty to successive generations, and those who strive to do so today. But then, the passing of a great Patriot helps us cut though the fog and bring the legacy of such Americans back into focus.

John McCain said of Bud Day, “He was the bravest man I ever knew, and his fierce resistance and resolute leadership set the example for us in prison of how to return home with honor.”

Brave indeed, but Bud Day’s beginning was unremarkable, as is the case with so many great Patriots.

He was born in Sioux City, Iowa, and in 1942, at the age of 17, he convinced his parents to allow him to enlist in the Marine Corps.

After three years serving in the South Pacific, he returned home and earned bachelor and law degrees. He also joined the Iowa Air Guard in 1950 and pursued a fighter pilot track. After flying F-84s on fighter-bomber missions in the Korean War, Day decided on a career as an Air Force pilot.

In 1967, then-Major Day headed a squadron of F-100s in Vietnam, assigned to a secret program nicknamed the Misty Super Facs. He and his men were tasked with flying deep into enemy territory and selecting targets. So dangerous was this operation that more than 40 percent of his pilots were shot down in the first six months. On August 26th of that year, Day’s own plane was disabled by enemy fire, and he ejected, landing in the gun sights of Vietnamese militiamen.

After several days of torture, he escaped and evaded the enemy. He was recaptured two weeks later after being wounded by a bomb that detonated nearby. He was returned to the same camp from which he escaped and was subjected to more severe torture before being marched off to the Hanoi Hilton, where he would spend the next five years.

Day’s Patriotism and his epic resistance to relentless degradation and torture by his captors is profiled in the book “Medal of Honor: Portraits of Valor Beyond the Call of Duty.” His citation in that book notes, “On one occasion in 1971, when guards burst in with rifles as some of the American prisoners gathered for a forbidden religious service, Major Day stood up, looked down the muzzles of the guns, and began to sing ‘The Star-Spangled Banner.’ The other men, including Navy POW James Stockdale, the ranking U.S. officer in the prison, joined him.”

Later, Vice Admiral James Stockdale, who was also awarded a Medal of Honor, recalled of that moment, “Our minds were now free and we knew it.”

George Day was released on March 14, 1973, and three years later both he and Stockdale were awarded the Medal of Honor by President Gerald Ford. His Medal of Honor citation concludes, “Col. Day’s conspicuous gallantry and intrepidity at the risk of his life above and beyond the call of duty are in keeping with the highest traditions of the U.S. Air Force and reflect great credit upon himself and the U.S. Armed Forces.”

After rehabilitation, Day returned to the flight line. Retiring in 1977, he opened a law practice in Fort Walton Beach, Florida, and devoted that practice to seeking support for veterans. 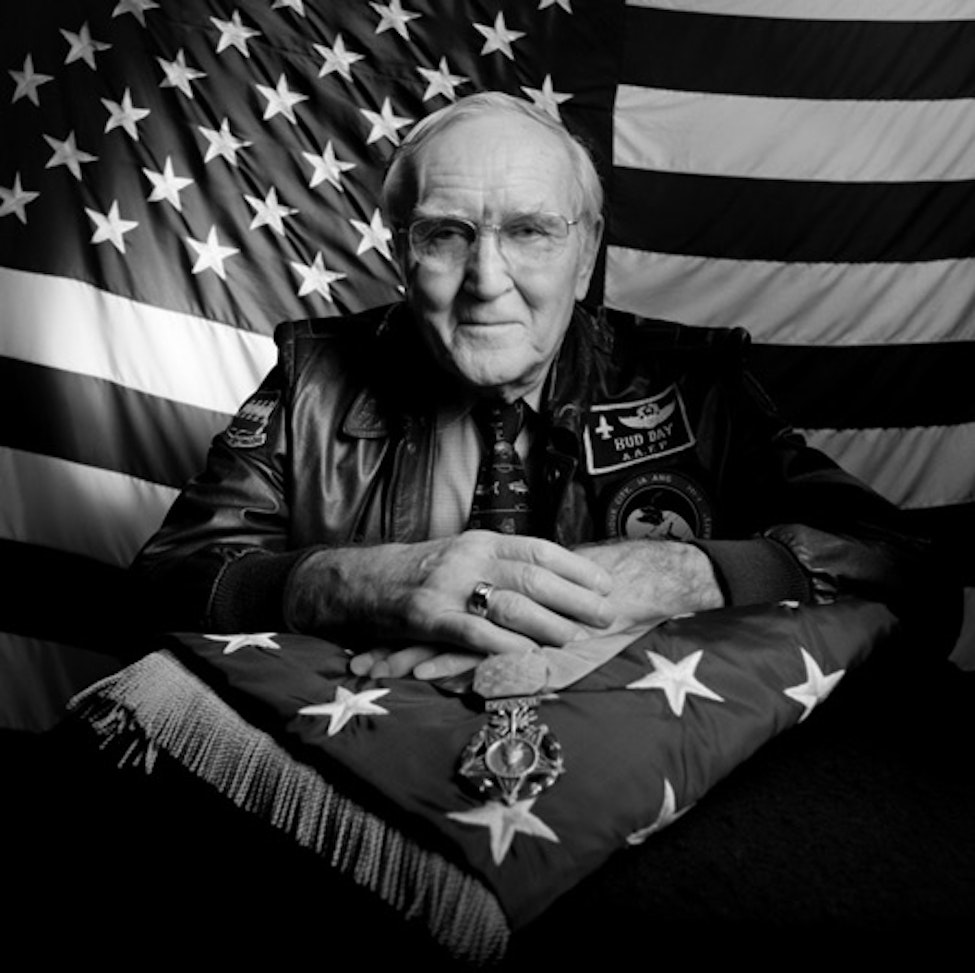 He was active in politics, most notably in his support for John McCain in 2000 and 2008, and George W. Bush in 2004, when Day worked with the Swift Boat Vets to expose the truth about John Kerry’s fraudulent and self-aggrandizing tour in Vietnam, and his treasonous actions afterward. (As was the case in the most recent presidential contest between Obama and Mitt Romney, the list of distinguished military patriots has always favored the Republican candidate.)

As tough and heroic as he was, Day was described by friends as a “gentle and humble soul.”

In 2011, when he was inducted into the Iowa Aviation Hall of Fame, he remarked of his service to our nation, “It was a great spirit of sacrifice and help [for] each other and high standards. You get those values from your parents, from your church. They expected a lot from us as kids, and we either gave it to them or they gave you a little corrective action.”

In his personal narration of his heroic service, Col. Day concluded, “We are so fortunate by the accident of birth to be Americans, and having had that good fortune, our primary duty is to make sure our country survives and we stay free. That ought to be the primary objective of every American for the rest of their life.”

Bud and his wife Doris celebrated their 64th wedding anniversary in May, and on the afternoon of his death she said, “He would have died in my arms if I could have picked him up.”

Of the passing of such extraordinary Patriots as George “Bud” Day, Gen. George Patton once wrote, “It is foolish and wrong to mourn the men who died. Rather we should thank God that such men lived.” Gen. Patton’s words not withstanding, I will do both: I will mourn the passing of Bud Day and thank God he lived.

(Footnote: I highly recommend further reading on Bud Day, starting with his 1989 autobiography, “Return With Honor.”)