A Perfect Storm for an End Run on Liberty

“Guard with jealous attention the public liberty. Suspect every one who approaches that jewel.” –Patrick Henry (1778) 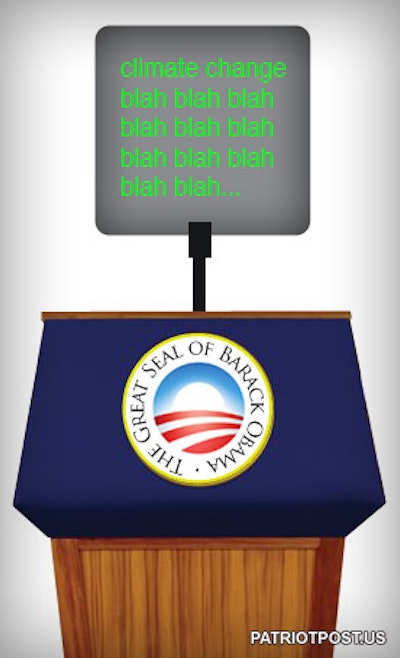 When summer arrives in the Northern Hemisphere, predictably, the alarmist “global warming” rhetoric heats up. Never mind that most weather forecasts beyond 72 hours are largely speculative; these hot-gas hucksters believe we should accept their inviolable 100-year forecast, starting with the most recent “Hottest Year Ever” report.

In 2014, Former President Barack Obama set the course for the “climate change” agenda, assuming Hillary Clinton would be his successor.

Ahead of that year’s midterm elections, amid the plethora of its domestic and foreign policy failures, the Democrat Party has chosen to make their “climate change” fear and fright campaign an electoral centerpiece. Their strategy is to rally the most liberal cadres of Al Gore’s cult of Gorons, whose religious zeal toward “global warming” is fanatical. Unfortunately, for the rest of America, most who occupy this Leftist constituency are no longer capable of distinguishing fact from fiction.

Obamacfixed the bar for his climate change “action plan” with these words: “[W]e know that the 12 warmest years in recorded history have all come in the last 15, and that last year was the warmest in American history. … [I]n a world that’s getting warmer than it used to be, all weather events are affected by it – more extreme droughts, floods, wildfires and hurricanes.”

Obama’s twisted assertions notwithstanding, the fact is global warming is largely a phantom menace, which is why the Left now religiously calls it climate change, or, a new favorite, “global climate disruption.” More on that in a minute.

Though the climate alarmists of the 1970s were driven by rhetoric over the coming ice age, the current climate calamity is one of global warming. But the question about climate isn’t if the weather is varying but why it is varying.

And the answer to that question is far less complicated than the “climate change” agenda, which is not about the weather, but about a political strategy to subjugate free enterprise under statist regulation – de facto socialism under the aegis of “saving us from ourselves.”

The climate is always changing relative to complex short- and long-term climate cycles, so “climate change” is a superbly safe political “cause célèbre” – sort of like “heads we win, tails you lose.” So, declarations like Obama’s 2014 State of the Union warning – “The debate is settled. Climate change is a fact” – fall into the “keen sense of the obvious” category.

In April, the Nongovernmental International Panel on Climate Change released a synopsis of thousands of climate studies, which contradict the conventional “global warming assumptions.” According to the Cato Institute’s Roger Pilon, “We are now at 17 years and eight months of no global warming.”

Not to be outdone by the NIPCC, however, the Obama administration released its own 800-page apocalyptic National Climate Assessment last week, with such erudite conclusions as, “[W]e know with increasing certainty that climate change is happening now.”

I “know” with more than “increasing certainty” that every time I walk outside, I can detect climate change, and this ever-changing condition is better known as “weather.”

Despite the hot hype, Jason Furman, chairman of Obama’s Council of Economic Advisers, the week before Obama trotted out his climate assessment, had this to say about sluggish first quarter economic growth: “The first quarter of 2014 was marked by unusually severe winter weather.” 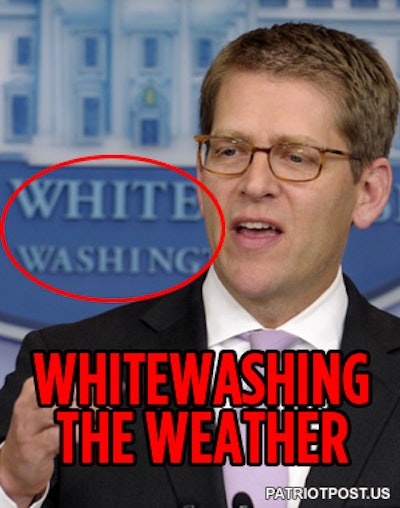 Obama’s minister of propaganda, Jay Carney, followed with this explanation: “We had historically severe winter weather which temporarily lowered growth in the first quarter … in other words, a reduction of 1 to 1.5% in GDP as a result of what was historically severe weather, one of the coldest winters on record, the greatest number of snowstorms on record.”

After the White House climate assessment was released, Carney was challenged about the disparity between “historically severe winter weather” and global warming, and responded, “The impacts of climate change on weather are severe in both directions.”

Well there you go – climate change is the default explanation for hot and cold weather.

It was no small irony that last week, Obama chose to promote his administration’s “green agenda” with Walmart as a backdrop – ironic given that most of Walmart’s products are produced in China and other third-world nations, the biggest land, water and atmospheric polluters on the planet.

To that end, columnist Charles Krauthammer notes, “We have reduced our carbon dioxide emission since 1996 more than any other country in the world, and, yet, world emissions have risen. Why? We don’t control the other 96% of humanity. We can pass all the laws we want. We can stop all economic activity and take cold showers for the next 100 years; it will not change anything if India and China are opening a new coal plant every week.”

I would suggest to Charles that it’s called “global climate” because it is not “local climate,” even if China and India reduced their CO2 emissions it would not stop “climate change.”

Further, the administration’s report claims that “climate disruption” has resulted in a global temperature rise of 1.3 to 1.9 degrees since 1895 – and it is no coincidence that the report cherry-picked that starting date because 1890 is recognized as the end of the 300-year “Little Ice Age” global cooling period.

For the record, estimates of the minuscule temperature fluctuation over the last century, if correct, would explain why White House science adviser John Holdren has abandoned the term “global warming,” opting instead for the more ambiguous and all-encompassing phrase “global climate disruption.”

Fact is, we “disrupt” the global climate every time we exhale.

Such linguistic obfuscations would make the old Soviet Dezinformatsia Bureau proud! Of course, the Obama administration has mastered the art of the “BIG Lie” from the top down. (Think about it: Would you buy a used car from any of them?)

However, even the Left’s cherished United Nations Intergovernmental Panel on Climate Change concluded that there “is limited evidence of changes in [weather] extremes associated with other climate variables since the mid-20th century.”

And, regarding the objectivity of all those erudite “climate change” scientists, columnist George Will observed, “There is a sociology of science. Scientists are not saints in white laboratory smocks. They have got interests like everybody else. If you want a tenure-track position in academia, don’t question the reigning orthodoxy on climate change. If you want money from the biggest source of direct research in this country, the federal government, don’t question its orthodoxy. If you want to get along with your peers, conform to peer pressure. This is what’s happening.” 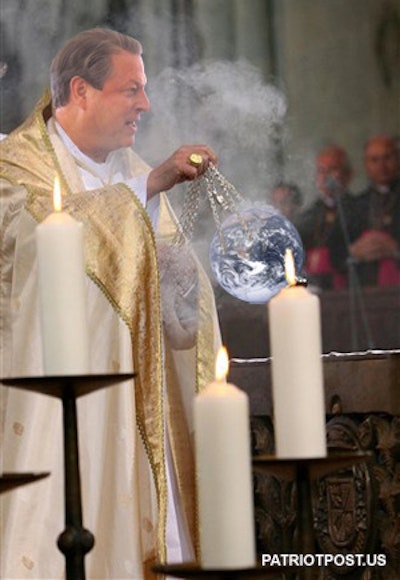 As for those of us who can distinguish between fact, fiction and political endgames, and are most decidedly not among Obama’s legions of pantywaist bed-wetters, he unilaterally suspends the revered scientific method and accuses us of “wasting everybody’s time on a settled debate – climate change is a fact. … Climate change is not some far-off problem in the future. It’s happening now. It’s causing hardship now.”

This week, you can expect to hear the Leftmedia trumpet some Antarctic ice melt, but you haven’t heard much about the record ice pack in the Arctic, which is threatening Al Gore’s once-marooned polar bear population, because the ice is too thick for the bears to reach their primary food source, seals.

Let me repeat myself: The climate hype is not about the weather, but about a political strategy to subjugate free enterprise under statist regulation – de facto socialism under the aegis of “saving us from ourselves.”

Indeed, Obama’s economic policies and regulations have already moved our nation rapidly toward the brink of statist totalitarianism.

And there was more evidence this week of Obama’s reckless strategy to subjugate our economy and by extension, our national security, to his “climate change” agenda.

Adding to his “War on Coal,” Obama has ratcheted up his War on Energy Independence, not only refusing to complete the Keystone XL pipeline but now going after alternative oil exploration methods by implementing new fracking disclosure rules. On top of that, he is undermining alternate transportation options for oil in the absence of Keystone XL with new regulations for trains transporting oil, and specifications for rail cars. Oh, did I mention Obama’s regulatory obstacles to constructing new refineries despite the fact that our current refinement capacity is approaching its limit?

How does this all add up?

According to columnist Terence Jeffrey, “Ultimately, it will not matter if people in government cynically promote the theory that human activity is destroying the global climate as a means of taking control of your life, or if they take control of your life because they sincerely believe human activity is destroying the global climate. Either way, government will control of your life. … In a nation where government can de-develop the economy, stop population growth and redistribute wealth both inside and outside its borders, there will still be droughts, floods and hot summer nights. But there will be no freedom.”  In his 1735 edition of Poor Richard’s Almanack, Benjamin Franklin observed, “Some are weatherwise, some are otherwise.” While the Left promotes its agenda as “weatherwise” and its detractors as “deniers,” fact is, they are otherwise.

(Update 25AUG14: After returning from two weeks of golfing on Martha’s Vineyard, Obama announced he would be using his “pen” to bypass Congress, and implement an international treaty regulating climate change – without the consent of the Senate.) 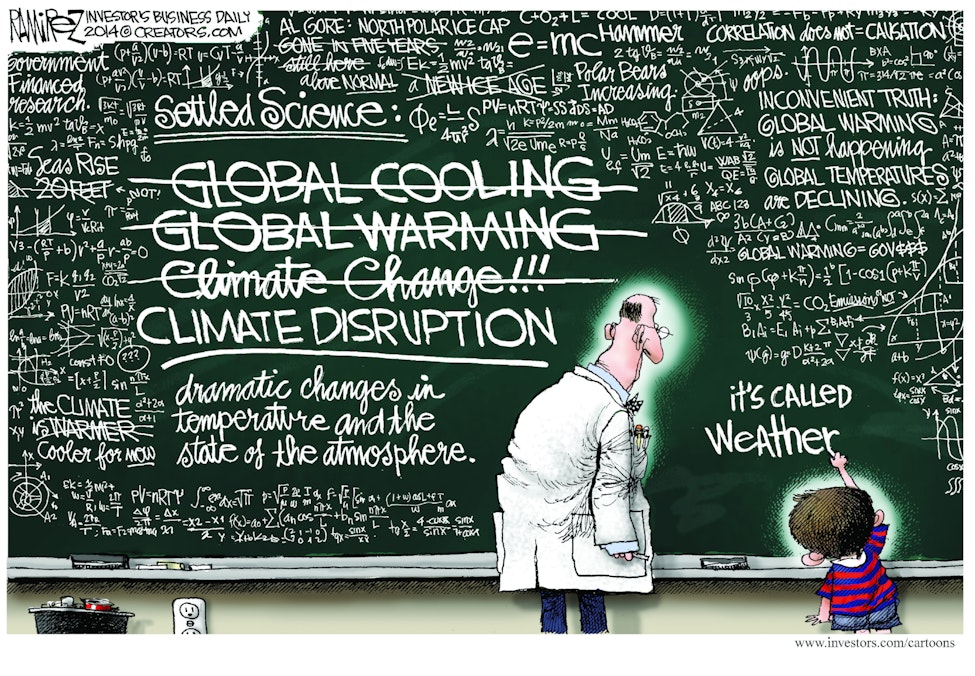